Because of its increasing popularity, cheese is available in different varieties to match the taste and preference of people. It is classified on the basis of the following factors: 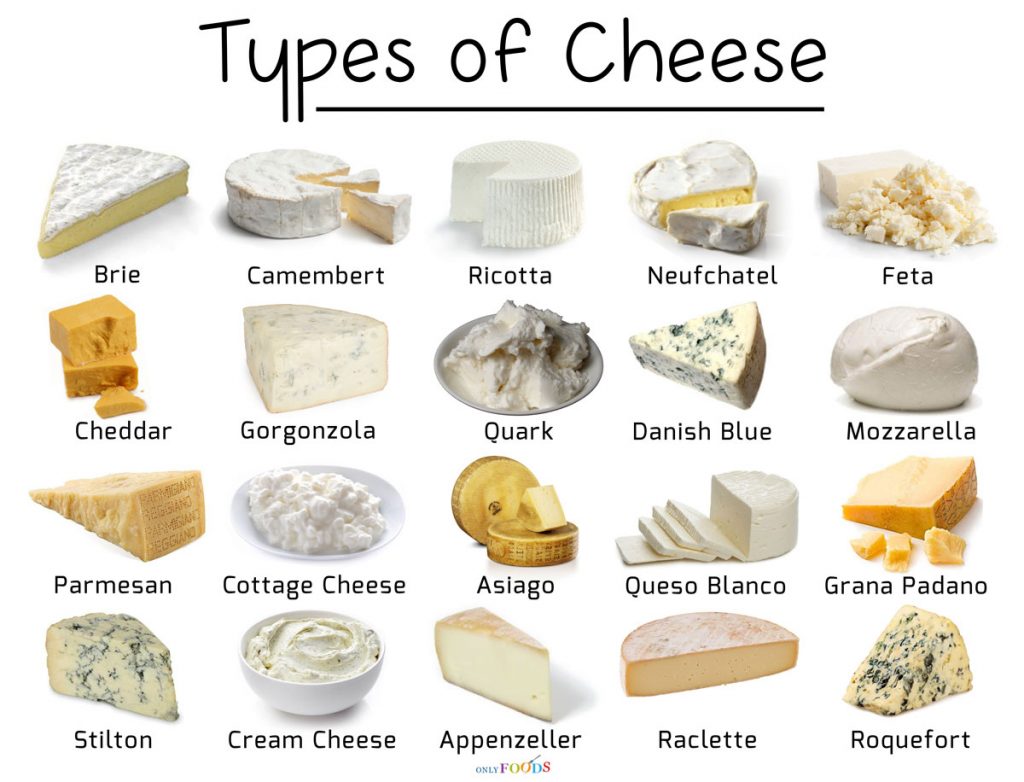 Produced from cow’s milk, this soft cheese is creamy, buttery, fruity and nutty, with a pale yellow look, deriving its name from its place of origination in Northern France.

Having a lactose range of 0-2%, it is ideal for those intolerant to it.

Uses: An appetizer, as toppings on sandwiches, pasta, and egg strata

Similar to Brie, though less creamy and more flavorful, this variety is also from Northern France, made from cow’s milk, taking its name after Normandy’s Camembert town. When ripe it appears white with patches and stripes of red on the outer side, and golden-yellow within.

A whey cheese originating in Italy, it can be prepared using goat, sheep, cow, or buffalo’s milk with a creamy-white appearance and a soft, moist, grainy texture.

One of the oldest French cheese varieties, it was made for the first time in Northern France’s Neufchatel-en-Bray region. They are available in various forms, with the heart-shaped ones being most popular. Known as farmer’s cheese in the United States, it is dense, milky, velvety, and grainy, replicating the rich, yeasty and nutty flavor of Camembert.

Uses: As an appetizer, in desserts, cheesecakes, pasta, pies, and cheese balls

Made in Greece, this soft, creamy brined cheese with or without holes is prepared from either only sheep milk or both sheep and goat milk. Produced as early as the 8th century, feta in English means cheese.

Uses:  As toppings on sandwich, pizzas, nachos, fruits and salads, as dips, for preparing stuffed zucchini, mushrooms, and peppers.

It is a highly sought-after hard cheese in the United Kingdom, also ranking second in the United States in terms of popularity. It gets its name from the Cheddar village of Somerset, in West England where it was produced. Though mostly off-white, this shredded cheese variety turns orange upon addition of colorings like annatto. Being low in lactose, cholesterol and fat, fresh cheddar is soft and smooth, while the aged ones are crumbly and dried with a sharp, distinct taste.

Uses: As toppings on crackers, as dips or even melted and included in snacks like mashed potatoes, and nachos

Originating in southern Italy, it is a white cheese, with an occasional yellow tinge, prepared from buffalo milk. This mild-flavored cheese with a creamy, milky flavor is high in moisture, though low-moisture varieties have also evolved in the market. Mozzarella is also prepared from cow (Fior di latte) and sheep (“mozzarella pecorella) milk, though these are less common types.

Uses: Pizza and pasta topping (as it melts easily), and as a prime ingredient in Caprese salad

It is a traditional unripened soft cheese with a creamy, milky texture and a subtle taste, having its origin in the German-speaking countries of Europe,

It is a fresh, soft and creamy, white cheese, which does not pass through any aging or ripening process to attain flavor. Made from pasteurized cow’s milk, it is loaded with essential nutrients and has low food energy, being a healthy option for diabetics as well as those on a diet.

This hard, blue cheese variety was produced in Italy’s Milan as early as the 11th century, known for its greenish-blue marbled appearance. Prepared from cow’s milk (unskimmed), it ages in three to four months and is buttery, crumbly and soft with a salty taste.

A blue cheese, mostly cylindrical-shaped, with a semi-soft, crumbly and creamy texture, is also available in the lesser known white variety. The European Commission has granted this variety the PDO (Protected Designation Origin) status and cheese only produced in the counties of Nottinghamshire, Derbyshire, and Leicestershire in England can be referred to as Stilton.

Uses: In salads and soups

Marius Boel, a famous cheesemaker of Denmark created this blue cheese in the 20th century, in an attempt to replicate the Roquefort blue cheese in terms of look, texture and flavor. Mostly sold in blocks or wedges, this semi-soft, creamy, crumbled cheese has a white or yellowish edible rind and a sharp, salty taste.

Uses: Served on bread and savory crackers, as a topping for salads, as a dessert cheese teamed with fruits

Made from sheep’s milk, this is one of the most popular blue cheeses originating in the southern France. It is white with blue molds, devoid of any rind, with the exterior being edible. Being crumbly and a little moist, it has a salty, tangy flavor.

Uses: In meat sauces and as a filling for tarts and pies

Alternately known as Parmigiano-Reggiano, this hard cheese takes its name after its places of production, the Parma, Bologna and Reggio Emilia provinces of Italy. Parmesan is, however, a generic name used to denote the cheese on the whole outside the traditional regions of production. Having a yellowish-orange appearance, it is smooth, polished, and grainy with small holes and a fruity, sharp and nutty taste.

Uses: Seasoning for pasta and pizza, as a topping on crackers, in soups and salads, as a side with fruits like melons, apples, and pears

Prepared from cow’s milk, the fresh, white Asiago cheese that is smooth and sweet (fresco or presatto) is ideal for grating, while the yellow ones aged for about six months (vecchio or d’allevo) with a crumbly texture, are great for melting.

Uses: For salads, pastas, soups and sauces (grated); as a topping for panini (sliced);

Originating in northern Italy’s Po river valley, this is one type of Parmesan cheese, hard, crumbly and grainy, made from unpasteurized cow’s milk.

Uses: In pasta and different curries

White in color, made from skimmed cow’s milk, this Mexican cheese is said to be a cross between cottage and mozzarella cheese. It is creamy, soft and smooth while homemade ones have a citrusy taste due to the inclusion of lemon juice

Uses: As garnishes on egg dishes and soups and toppings on salads

Soft and mild-tasting, this fresh cheese has milk and cream as its main ingredients. The first variety of cream cheese evolved in England and France as early as the 16th and 17th century.

Uses: As a spread on cracker, bread and bagel, as a snack dip and also as a topping for salads

A hard cheese variety made from cow’s milk with a fruity, nutty flavor and strong smell, it is produced in northeastern Switzerland’s Appenzell region. This straw-colored cheese has small holes and a yellowish-golden rind.  They are divided into three types, the classic (mildly spicy with 3-4 months of age), surchoix (strongly spicy having an age of 4-6 months) and extra (very spicy with over 6 months of age).

Uses: In salads, pies, and desserts

Prepared from cow’s milk, this semi-hard cheese with a smooth rind, derives its origination from the Alpine regions of Switzerland as early as the 13th century. This creamy buttery cheese with a fruity taste may be pale yellow or orangish-brown on the outer side and golden within.

Uses: Besides being added as a stuffing and topping, it is a dish by itself eaten along with dried meat, pickled onions and potatoes