13 of the Popular Types of Sweet and Bitter Oranges

Oranges are nutritious citrus fruits, rich in vitamin C, alongside vitamin A, B6, magnesium, copper, manganese, selenium, and phosphorous. Adding this fruit to one’s diet help boosting the immune system, maintaining healthy skin as well as keeping the blood sugar and cholesterol levels in check. The color varies from orange to yellow, with the rind or skin either being thin or thick based on the varieties. Besides eaten fresh, they are made into juices, as well as used in marmalades, sauces, or for preparing a host of dishes. Based on their taste, oranges come in two significant categories, namely sweet and bitter. 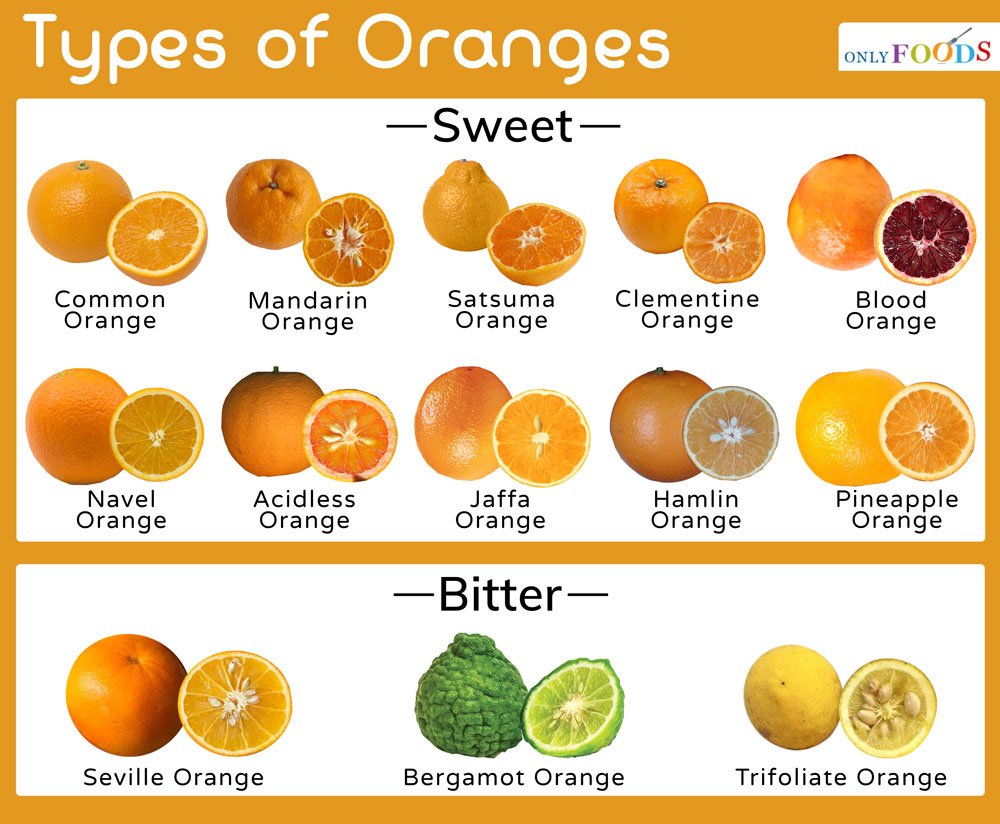 13 of the Popular Types of Sweet and Bitter Oranges

The oranges mentioned in this category are marked for their sweet taste and less acidic nature.

Alternately known as blond, white, or round orange, it accounts for 2/3rd of the orange’s production. Of the several types of common oranges that exist, Valencia is the commonest, noted for its juiciness, named after the city of Spain. Hamlin, discovered in Florida, is another of its type, having a small, smooth fruit, and a pale yellow juice. Bahia (Brazil and Uruguay), Belladonna (Italy), Berna (Spain), Calabrese (Italy),  Dom Joao (Portugal),  Charmute (Brazil), Fukuhara (Japan), Jincheng (China), Malta (Pakistan) are the other common orange kinds.

Shape: Round or oval, having a smooth, thin rind

Mandarin is the sweetest member of the orange family and closely related to the common orange. Though believed to have originated in India, they gained prominence in China, due to which they have derived their name. They are small-sized, with loose, thin pebbly skin, which is easy to peel. The ripe ones have a soft texture and appear heavier for their size. These oranges are tender and easily susceptible to cold. There are different types of mandarins, like satsuma, clementine, tachibana, and kishumikan.

Shape: Small and oblate or spherical

Originating in Sicily during the 15th century, their dark red color is due to the increased anthocyanin concentration.  Maltese, having a deep burgundy color, is one of the prominent blood orange kinds. It is grown in Malta, and southern Spain, commonly used in sorbets and a whole lot of desserts. Moro (Italy and Sicily), Sanguinelli (Sicily), and Tarocco (Italy) are the other types of this fruit.

They are the most familiar orange varieties in the United States, having a dimple at one end, replicating the human’s navel. Because of their thick skin, one can peel them quickly, making it convenient to eat out of hand. Though sweet, they could have a tinge of bitterness since they are high in limonin as well as other limonoids. They are available between November and April, with the peak seasons being from January till March. Cara cara, one of the significant navel orange types, has a pinkish-red flesh, thus being named red navel. It has a sweet taste and a less acidic nature. Late navel, dream navel, bahia, and Washington or California nave, are the other popular varieties.

As their names suggest they have low acid levels, alongside a sweet taste. They have a host of names that vary from one country to the other. The examples include sweet orange (United States), maltese or dolce (Italy), sucrena (Spain), meski (North Africa), lima (Brazil), seker portakal, or sugar orange (Turkey), and succari (Egypt). Since these oranges hardly have any acidic content, they are rarely prepared as juices and mostly eaten.

Shape: Round, spherical or oblong

Taste: Soft and juicy devoid of any vivid flavor since it is less acidic

A smaller variety of mandarin orange, satsuma is seedless, with a soft texture, and can be peeled easily. They are in season for a short span between December and February, mostly indigenous to California, and the region around the Gulf Coast. Because of their sweet and sour flavor, they form a part of desserts and savory dishes.

The clementine orange is a hybrid between the willow leaf mandarin and sweet orange. It takes its name after Clement Rodler, credited to have discovered it in 1902. Small in size, they are smooth and glossy and can be easily peeled. The regular clementine has about ten seeds, while the seedless kind has a few or no seeds at all. The Monreal clementine is another variety, being larger than the seedless ones, containing more than ten seeds approximately, also having a sweet taste.

These oranges have thick skin, a lesser number of seeds, and an excellent flavor. Because of its tough skin, it can be exported with ease. It attained its name from its place of origination, Israel’s Jaffa, with the fruit also cultivated in Iraq, Lebanon, Cyprus, Jordan, Turkey, and Syria.

These oranges, indigenous to Florida, belong to the seedless variety with a thin, smooth rind and a juicy texture. They are tolerant of cold, and the fruits ripen between October and January.

Shape: Round or oval

Medium to large, they are named so since their rind color is similar to that of a pineapple. The flesh is soft, light, juicy, and sweet, making it ideal for extracting into juices.

Shape: Round or oval

They have a characteristic bitterness with a comparatively high acid content than the sweet varieties. Most of them are made into marmalade, added to salads or used in making teas, instead of being eaten fresh.

They are a result of a hybrid between the mandarin and pomelo orange,  mostly used for preparing marmalade. The ripe fruit’s juice is used for salad dressing in Turkey, and for marinating of meat in the Americas.

Shape: Round or oblong

Taste: Sour, tangy, and acidic with a bitter taste

Originating in Italy, the bergamot orange has a color similar to that of lemon. Genetic researches reveal this orange variety to be a cross between bitter orange and lemon. This variety, however, has no relation to the herbs by the same name. Their peel has an aromatic essence, used for flavoring Lady Grey and Earl Grey teas, and also in perfumes.

These oranges are similar to lime when it comes to size, with a thick rind, downy surface, and fuzzy texture.  Indigenous to Korea and northern China, they are alternately known as Chinese bitter orange, Japanese bitter orange, or hardy orange. They have many seeds as well as a distinctive aroma in comparison to other citrus fruit varieties. Because of their increased bitterness, they cannot be consumed fresh but used for preparing marmalades. They serve as a condiment in their dried, powdered form.

Shape: Round or obovate

The climatic conditions play a significant role in giving the oranges their characteristic differences. Those growing in tropical areas have a thin rind, less acid content, pale color, and juicy flavor in comparison to those thriving in the cool and sub-tropical regions.