14 Different Types of Pears With Pictures

Pears are small to medium-sized fruits, with a typical “pear” shape, which is bulbous at the bottom, and tapering to the top. However, the size and look may vary as some appear short and stubby, a few may be egg-shaped, while others may be more elongated. The 3,000 known types of pears could either have red or green skin or even come with a golden-yellow or cinnamon body. Besides being eaten raw, they can be canned, dried, and used in different cooking techniques like grilling, baking, poaching, and roasting. 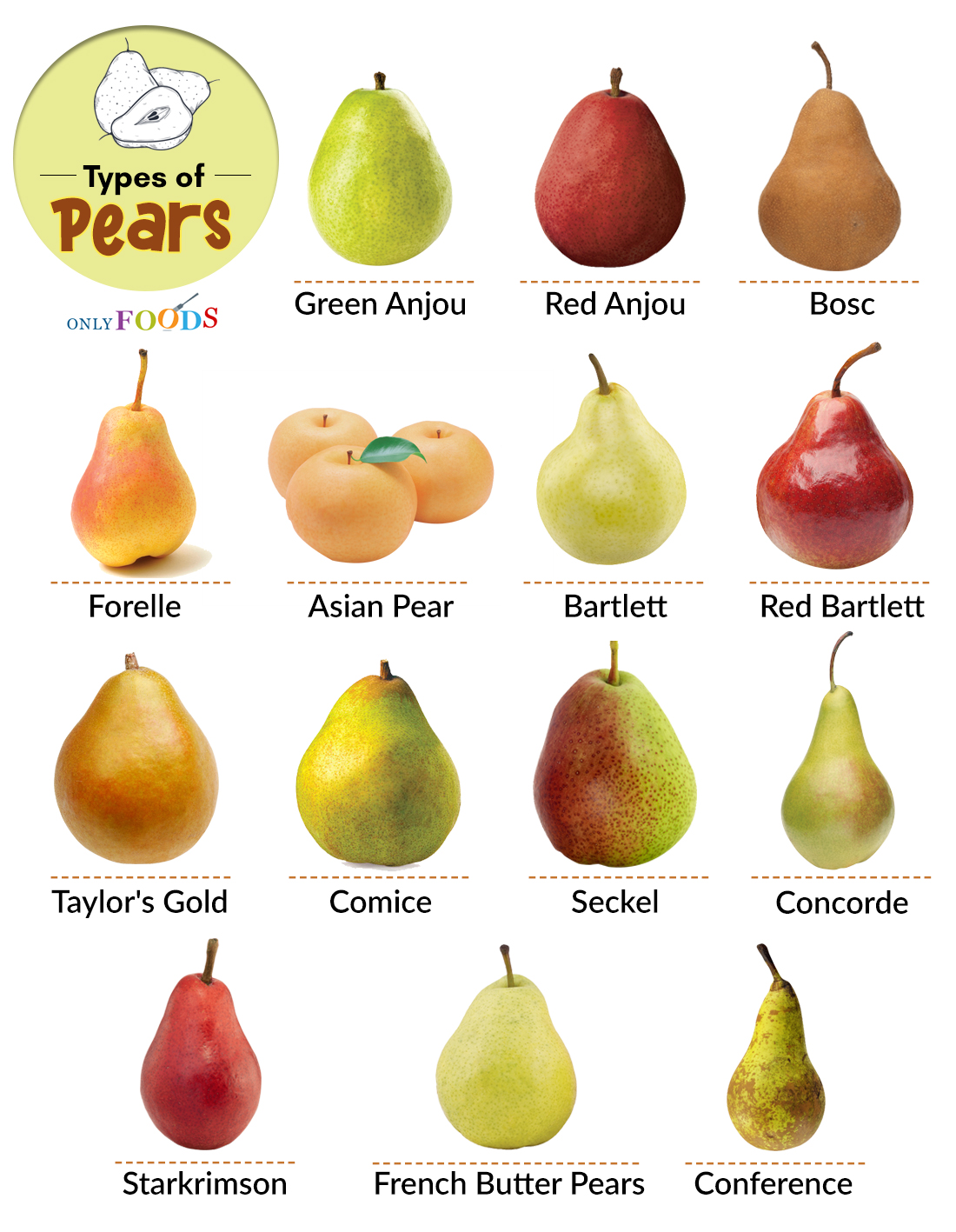 14 Different Types of Pears With Pictures

This medium to small egg-shaped pear has a sweet citrusy taste with a smooth texture. It gets juicier as it ripens, but does not turn yellow like most other varieties. It is one of the most commonly available pear variety in the United States. It can be eaten fresh, or even sliced and added to breakfast cereals or salads. The versatility of the texture of green Anjou makes it ideal for baking, poaching, grilling, and roasting.

Bartlett pear, alternately known as Williams pear, popular in Europe and America, is mostly found in summer since it is intolerant to cold. The fruit, resembling a bell, has cream-colored flesh that transforms to golden-yellow as it matures. Tart and crunchy at the onset, the fruit becomes smooth, buttery, sweet, and juicy on ripening. Besides eaten raw, it is suitable for salads, cocktails, desserts, juices, and purees. It even does well with baking as it can retain its shape well.

Forelle, originating in Germany as early as the 17th century, is one of the smallest pear varieties. Its name in German translates to “trout” all because of the red spots against the green skin, giving it a color similar to the rainbow trout. It has a bell-shaped symmetrical body, and moist whitish-yellow flesh. Its crispy texture, and sweet-tart taste, makes it an excellent choice for salads and snacking.

Seckel is a miniature, round pear, with a small neck and a short stem. Its olive skin has a maroon blush, which darkens a little, turning matte as it ripens. This crispy, juicy variety tastes like sweet champagne, being ideal for desserts. Its small size makes it apt for spicing and pickling. The fruit makes for a perfect lunch box snack for kids, and can even be baked, simmered, or poached conveniently.

French butter pears have a teardrop shape with a green skin that turns golden to greenish-brown on ripening. Its discovery in France’s Boulogne region in 1820, alongside its buttery texture, gives the fruit its name. This creamy, delicate pear tastes sweet and juicy, while the lemony notes add to its tartness. Besides consuming it raw, one can use it in baking, grilling, glazing, and poaching.

It is the European pear’s autumn cultivar, developed by Thomas Francis Rivers in Britain. This pear attained its name after London’s National British Pear Conference where it had won the first prize. It has an elongated bottle-like body, with a greenish-brown skin and white flesh, both of which turn to pale yellow on ripening. Its soft, smooth texture, and sweet taste, makes it suitable for poaching, baking, and roasting.

Comice, originating in the middle half of the 19th century in France’s Angers city, has a bulbous body with a short neck and a smooth yellow-green skin. Soft, and buttery, the fruit is considered one of the juiciest and sweetest of the lot. It serves a perfect choice for eating raw, slicing into salads or juicing. However, comice is not an appropriate choice for cooking since its soft juicy flesh is unable to remain firm and falls apart.

It is an outcome of the Conference- Comice pears cross, taking the elegant appearance, and crispiness of the former, as well as the sweetness and juiciness of the latter. As it ripens, its yellowish-green skin turns to golden russet while flavor-wise too, it gets sweeter and mellower. One can eat it out of hand, prepare it into salads, or even use this variety for baking, grilling, sautéing, poaching, and roasting.

Known by a host of other names like the Korean pear and Japanese pear, it is grown in East Asia, the United States, and Australia. This green, golden-yellow, or bronze skinned pear appears round and plump. It is crunchier than most other varieties and commonly eaten fresh, besides being added to salads, grated to prepare coleslaws, or even baked. Because of its big size and high price, it is often given as presents or served to guests.

The red anjou has a striking similarity in all aspects with the green anjou apart from its color. It is mildly sweet and smooth, appearing increasingly juicy upon ripening. The pear’s bright shade makes it appealing when added to a salad bowl or as a garnish for any platter. They undergo a slight change in color when ripe, and are apt for poaching, roasting, and baking.

They have the perfect pear-like shape, round at the bottom, tapering to form a curved neck. The red Bartlett turn red or maroon on ripening, also becoming juicier, and sweeter. They can be eaten out of hand, sliced, and made into salads or even added as a topping to flatbreads and sandwiches. Their comforting taste and buttery texture make them great for sautéing, baking, grilling, and boiling.

Also known as Red Crimson, Red Clapp’s, and Kalle, this variety developed for the first time in 1956, in the Starkrimson Nursery of the United States, thus getting its name.  The identifying features include its crimson red body (getting brighter upon maturation), and thick stocky stem. Starkrimson has a mild, sweet, juicy taste, and a floral aroma, alongside a smooth, crisp, delicate texture. It does not taste too pleasant when eaten raw but is ideal for baking, canning, and roasting.

Taylor’s gold, first discovered in 1986 in one Michael King-Turner’s orchard in Nelson, New Zealand, has a striking similarity with the comice variety. It has a cinnamon body with a russeted pattern and an ivory to cream flesh. This soft, creamy pear is sweet and juicy, also having a mild honey-like flavor. One can eat it fresh or add it to their fruit salad platter. It can also be poached, simmered, or baked into cakes, pies, and tarts.

Also known as Buerre Bosc, this type got its name after French horticulturist Louis Bosc, and is presently grown in Australia, Europe, and America. Its cinnamon skin, elongated neck, and long, curved stem give it an elegant appearance, making it an artist’s favorite subject for painting or photography. This sweet pear with its firm, dense flesh is perfect for poaching and baking since it can retain its texture and shape well.

Q.1. Which type of pear is the sweetest?

Of the different types of pears, comice is one of the sweetest varieties, also renowned for its juiciness.