20 of the Most Popular Types of Breads

Bread, a staple food  known worldwide for its versatility and high nutritional value, is primarily made from a simple flour-water dough. Being one of the oldest man-made food items, its importance has been felt since the time when agriculture was man’s primary occupation. The United States leads in the production of bread and other bakery commodities, followed by China, Russia, and Germany. 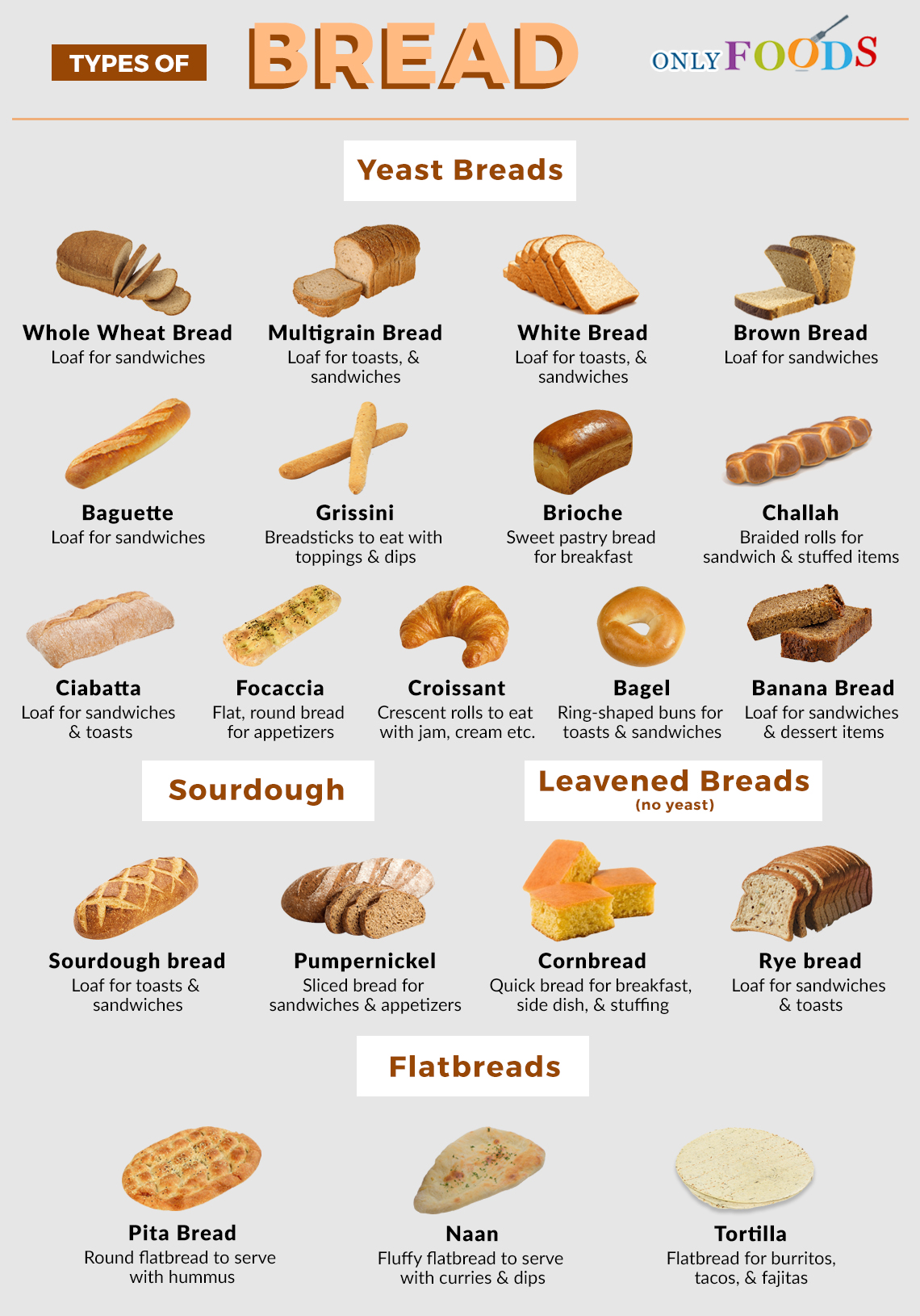 20 of the Most Popular Types of Breads

There are more than 50 basic types of breads, distinguished primarily by the ingredients that go into their making (wheat flour, as well  as barley, sorghum, rye, millet, rice, oat etc.), their taste, and the leavening agents used (yeast being the most common choice) to give them a proper shape. Here are a few examples:

It is a brown bread variety prepared using flour, partially or wholly milled from whole or near-to-whole wheat grains. Other common names for the bread include wholemeal bread, wheat bread, and whole-grain bread (a term used in the United Kingdom). The composition varies from one country to another as some keep the germ, bran, and endosperm intact, while a few may eliminate any one or two of the ingredients. In Canada, though it is sold as whole wheat bread, some amount of wheat germ is removed from the flour.

This bread variety uses two or more grains, with barley, millet, oats, flax, whole-wheat flour, and wheat being the common ones. Some also include edible seeds such as pumpkin seeds, quinoa, sunflower seeds, and flaxseed. Their history dates back to the Egyptian era when breads were baked with a single ingredient, though. These sweet, soft breads advertised since 1954 in the U.S. newspapers surpass the white ones in vitamin, protein, and dietary fiber content.

Best for: Toasts, sandwiches, rolls, and breadcrumbs for recipes like a cutlet, and croquettes

White bread, often called sandwich loaf in the United States, is prepared using wheat flour with the germ and bran layers removed from the entire kernel to bring in its light coloration. Its history dates back to more than 12,000 years during the Natufian culture when bread was made using grass grains. Its market demand declined when people considered the whole grain alternative healthier, though it has regained its popularity presently.

It is made of whole-grain flour, mostly wheat, while coffee, molasses or caramel are often used for coloring. It has an eventful and diverse history from serving as food for the poverty-stricken during the Irish famine to emerging as the clergymen’s staple Saturday-night diet around the Boston region. Some of the regional varieties include the Irish brown bread, Borodinsky bread, and Boston brown bread.

Best for: Sandwiches, and pizza

Baguette is a long and thin crusty French bread prepared from wheat flour, common salt, yeast, and water. Its name that it got after 1920 translates to baton, stick, or wand all due to its shape. They originated as early as King Louis XIV’s reign, though they were longer, thinner, and wider. They are also made with other dough like rice flour (in Vietnam), sourdough, and multigrain (in North America).

Grissini or breadsticks are long, crispy sticks originating in Italy, also known as dipping sticks, and grissino. Its essential ingredients include wheat flour, alongside salt, yeast, and fat or oil. Of the several theories regarding its development, the prominent one doing the rounds is that it is a 17th-century invention by baker Antonio Brunero from Turin.  Dried breadsticks, eaten as an appetizer or quick snack is commonly sold in markets.

Best for: An appetizer (as served in many Italian-American joints) with toppings of garlic, cheese, and butter; as a dessert dish when garnished with sugar, icing, and cinnamon

It is a French pastry-type bread having a light, soft, and fluffy texture due to the increased amount of eggs and butter that goes into its preparation. Other ingredients include flour and any liquid like cream, milk, water, or even brandy. This sweet, buttery bread has a dark and golden appearance because of the egg wash it goes through after proofing. It was first mentioned in France as early as 1404, finding a place in Cotgrave’s bilingual dictionary in 1611.

Type: Pastry breadavailable as loaf, bun and in other forms

Best for:  An appetizer when filled with beef, sausages or other meat dishes; as a topping for desserts; as a breakfast dish when eaten with jam or butter or prepared into a French toast

It is a braided Jewish bread, eaten during special occasions like Sabbath. The name “Challah” means “portion” in Hebrew, conforming to the ritualistic trend of setting aside a part of the dough as an offering. The essential ingredients  to make this soft, sweet, and spongy bread include white flour, sugar, yeast, eggs, water, and oil, while water challah is the eggless kind. Modern versions have oats, whole wheat, or spelt flour for white flour and honey or molasses instead of sugar.

It is an Italian variety of white bread, having wheat flour, salt, olive oil, yeast, and water as its prominent ingredients. It was first made in 1982 by a Verona-based baker, Arnaldo Cavallari after the French baguettes became immensely popular. The bread’s texture varies within different parts of Italy, like in Lake Como, it is light, soft, and porous with a crisp crust. Ciabatta in Italian means slipper and the bread has several alveolar holes on it.

Best for: Sandwiches, and toasts

A flatbread, baked in the oven, Focaccia has its roots in Italy. It closely replicates a pizza dough in its style and texture. High-gluten flour, water, yeast, salt, and oil are the main ingredients involved in its preparation. “Focus” in Latin means “hearth” or a place to bake, and that is how the bread was made in Ancient Rome. It could be chewy, salty, and oily, and even attain a thick dry texture depending on its preparation process.

Type: Flat and round, similar to pizza crust

Best for: Pizzas, sandwiches, and as an accompaniment for salads and soups

The croissant is a Viennoiserie pastry originated in Austria, made with butter and yeast-leavened dough. Its crescent shape gives it the name croissant. The bread attains a flaky, buttery texture just as puff pastry because of its preparation method. It originated as early as the 13th century and formed an integral part of a European continental breakfast. They are crispy with a sweet-savory taste.

Best for: Breakfast with jam or butter; as a dessert with fruit or cream filling and topping

Bagel or beigel, is a ring-shaped bread, originating in Poland’s Jewish communities. Its method of preparation makes it chewy, doughy, and dense within, and crispy on the outer side. Seeds are sprinkled on its outer parts, with sesame, and poppy being the traditional ones. Though wheat dough is mainly used, alternatives like rye and whole-grain have come up in the present times. The hole at the center is its trademark feature, giving it a more significant surface area.

It is a cake-like sweet bread, with mashed bananas as its primary ingredient. They had found a place in American desserts since the invention of banana during the 1870s. However, it reached the American cookbooks not before the 1930s after baking powder and soda came into the market. Food experts say that it developed at the time of the Great Depression, as thrifty homemakers desired to use the overripe bananas. The U.S. celebrates National Banana Bread Day on 23rd February.

Best for: Sandwich, toast sticks, or as a topping for sundaes when sliced or cubed

It is made by fermenting the dough with yeast and naturally occurring lactobacilli. The bacteria produces a lactic acid that makes the bread taste sour, giving it longer shelf life and setting it apart from regular yeast breads. The oldest sourdough bread dates back to 3700 BCE in Switzerland. However, this fermentation process has known to exist long back during the Fertile Crescent period. The sourdough technique was introduced at the time of the California Gold Rush in Northern California. It has become an integral part of San Francisco’s culture at present.

Best for: Toasts, and sandwich

Pumpernickel made from coarsely ground rye grains has a dense texture with a mildly sweet taste. Its dark brown color is due to the prolonged baking process it goes through. Originating in Germany, pumpernickel in Bavarian means hard, which most probably is in reference to its preparation method. The German markets sell it in slices in small packets. It has several varieties like roggebrood in the Netherlands, and rugbrod in Denmark.

Best for: Sandwiches, as an appetizer with toppings of tomato, sliced onion and cream cheese

This is a kind of quick bread, with cornmeal as the primary component mostly leavened using baking powder.  The Native Americans introduced this dish which became an instant hit at the time of the American Civil War since it was cheap and could conveniently be made into a whole lot of shapes.  It has a grainy texture with a slightly sweet taste. Its variations include crackling bread, baked cornbread, hot water cornbread, corn pone, and Johnnycake.

Best for: Sandwich, toast, and as a side to be eaten with chili con carne or barbecue

Made from rye grain, its color could be light or deep based on the flour and coloring agent that goes in its preparation. It has a strong earthy flavor, and increased fiber content than the regular white bread. Rye bread originated in the Middle Ages, being a staple food for people then. It is immensely popular in certain European countries like Germany, Sweden, Denmark, Latvia, Estonia, and Poland.  Though many breads stick to just rye, some like pumpernickel even includes wheat.

It is a yeast-leavened variety of flatbread with a round shape, made from flour, salt, water, and yeast. Its history dates back to approximately 14,500 years as early as the Stone Age in the Middle East. It is often baked at an increased temperature, causing pita to puff up and form pockets. The bread comes with a dense texture and mildly sweet flavor.

Best for: Wraps for gyros, falafel, or kebabs; as an accompaniment for hummus, and other dips and sauces; as stuffing for veggies or meat; made into crispy chips when cut and baked

It is a leavened flatbread baked in the oven, having ingredients of flour, water, salt, and yeast. The word derives its origination from Persia, meaning hot pebbled-baked bread. Its first mention occurred in 1803 in William Tooke’s travelogue. While in the Indian subcontinent, it is a thick flatbread often cooked using a tandoor, in Indonesia, it is called roti naan and cooked with local spices. The ones in Myanmar are soft and round served along with coffee or tea for breakfast.

Best for: Lunch or dinner when served with meat or vegetable curries

This variety is a small thin flatbread primarily comprising wheat or corn. Tortilla translates to a “small cake” in Spanish, first prepared by residents of the Mesoamerica area. Those made with maize are the oldest tortilla types still famous throughout Mexico and parts of Central America.  Wheat tortilla, alternately referred to as flour tortilla, contains fat, and baking powder that gives it a soft and puffy texture.

Best for:  Making pizzas as well as serving with curries, and as buttered rolls with dips

Other Common types of breads

Q.1.What is the healthiest type of bread?

Ans. Whole wheat bread, multigrain bread, Ezekiel bred, and those made from rye, oats and corn are considered healthiest among the lot.

Ans. The sourdough bread stays fresh for the longest, about 4 to 5 days, since the natural acidity of it lessens the chances of bacterial growth.

Q.3. What type of bread is best for French toast?

Ans. Brioche is the best bread for French toast because of its soft, buttery texture.

Q.4. Which breads are vegan?

Ans. There are many vegan breads like sourdough, tortilla, focaccia, ciabatta, baguette, pita, and Ezekiel.