Melon, an edible fruit, mostly having a sweet taste, with varying intensity, has eventually developed as a preferred breakfast fruit. It also finds its way into desserts, smoothies, and juices, while some kinds with their mild taste are cooked too. A rind, a fleshy interior, and black seeds, make a melon, no wonder, they are classified as a variety of berry, botanically. While a few popular ones are available throughout the year, they still have peak periods, for instance, the watermelon season runs through summer. 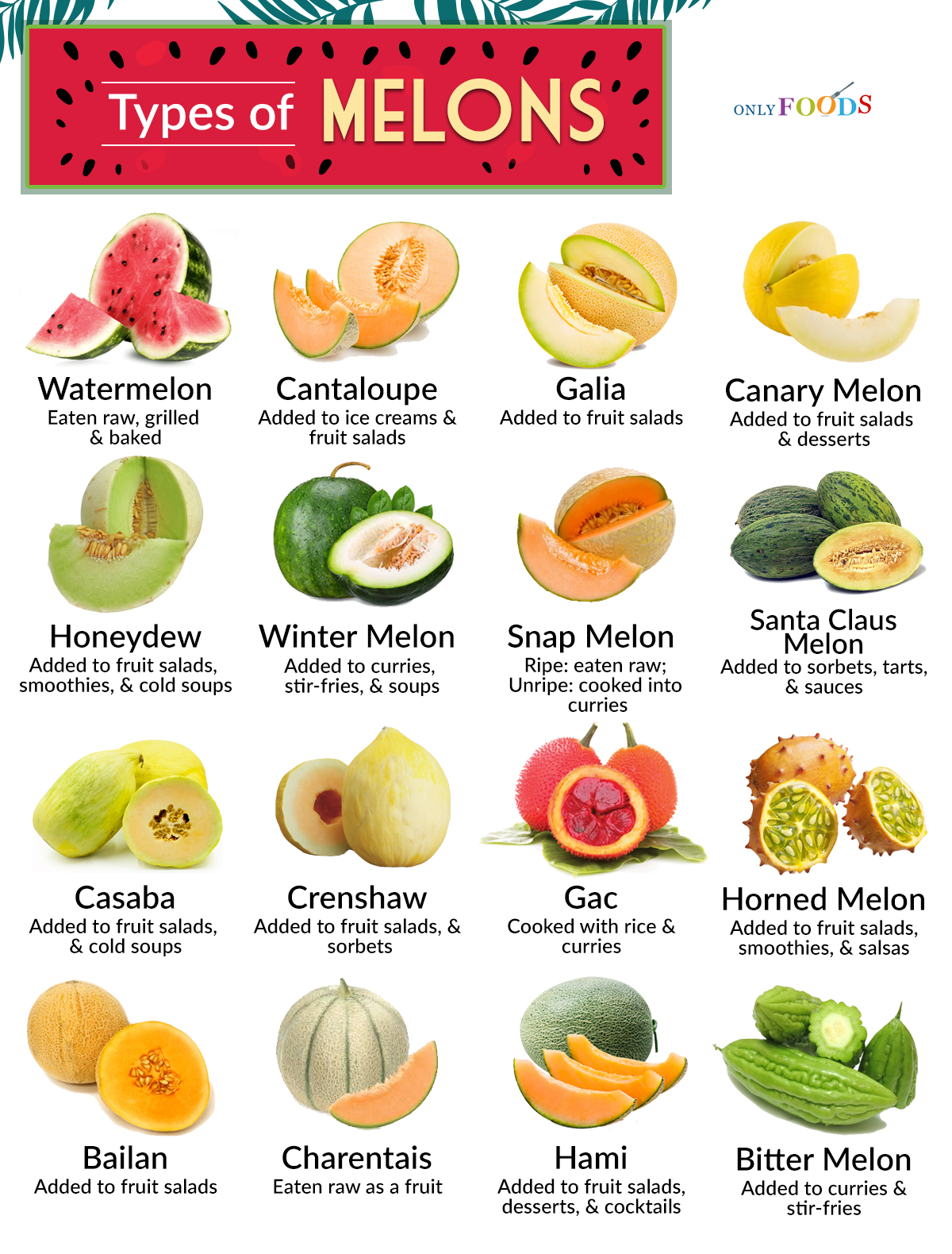 Of the different melon varieties, the ones eaten as fruits come from muskmelons or watermelons belonging to the Cucumis melo, and Citrullus lanatus species respectively. Bitter gourd included in the group because of its gourd lineage, appears different from the rest of the lot, as it is consumed as a vegetable.

The melons that would emit a dull sound when tapped upon are the riper ones. Also, honeydew and other winter melons would soften with the slightest pressure, while the fruity fragrance in cantaloupes and muskmelons hint that they are grown.

Some of the Best Melon Varieties

One of the most popular melon types, watermelon, originated in West Africa, with its fame spreading all over eventually. Its high water content (92% in a single bite) earns it the name watermelon, also making it a sought-after summer fruit. It has a dark green, mottled edible rind with a firm texture. The soft, sweet, juicy flesh is deep red or pink, or even yellow and orange. One can eat it raw, add it to desserts, make beverages, and cook, fry, roast, grill, or bake it.

Many black seeds, having a nutty flavor, sit within the flesh, but seedless ones also exist. The seeds are mostly discarded when consuming the fruit raw but can be ground, dried, or roasted. A whole melon remains good for about two weeks when refrigerated. The cut ones stay for approximately three days when wrapped well in plastic. Some cultivars of watermelon include Carolina Cross and Golden Midget.

Also known as sweet melon and rockmelon, cantaloupe is a part of the muskmelon family. It has a mesh-like netted green to beige skin and sweet, juicy, orange flesh. The North American cantaloupe, has a more rounded and netted appearance, tasting moderately sweet. On the other hand, the European cantaloupe, possess a greenish-gray skin, ribbed pattern, and increasingly sweet taste.

Low in calories and high in vitamins and potassium, they can be consumed raw or with custard, ice cream, and fruit salad. Commonly found in most supermarkets in the United States, mainly between June and August, they stay good in a refrigerator for about five days if cut and kept as a whole.

Galia, developed in Israel in 1973, a result of the honeydew melon – cantaloupe cross, is a new addition to the melon family. They are round with a yellow-orange, heavily netted skin, transforming to deep yellow when ripe. The pale green, smooth and juicy flesh has a sweet-spicy flavor, with an intense banana-like aroma.

These melons do not respond well to cooking and taste best when eaten raw, or served as a salad in a fruit platter. They even go along as accompaniments with soft cheese and seafood. Unripe melons survive in room temperature, while ripened ones remain fine in a fridge for three days. Widely available in groceries and supermarkets, its peak time is between spring and mid-fall.

These enormous melons have a bright yellow rind similar to a canary bird that becomes a little waxy upon ripening. Their pale green or white flesh resembles a pear but has a softer texture. Mildly sweet and juicy with touches of pineapple, it appears a little tangier than honeydew melon.

Commonly found in Asia and different parts of America, its peak season is summer. However, it remains available from spring to fall. Low in calorie and high in vitamins and fiber, it is popular in snacking and used in fruit salads and other desserts. Their best storage temperature is 59°F (15°C), with uncut melon remaining best in a refrigerator for five days, and cut ones for about three days.

Also  referred to as green melon, they are round or oval with a longish body. The smooth skin varies from green to yellow, while the flesh has a pale green color. They taste the sweetest upon ripening with a honey-like, juicy flavor. Making for a great inclusion in fruit salads, smoothies, cold soups, syrups, and cocktails, they remain available year-round in supermarkets. However, the ideal time to get them is between August and October. Ripe, whole melons do well in a refrigerator for three days.

Alternately known as wax gourd, and ash gourd, this one is a big fruit mostly consumed as a vegetable when matured. Found widely throughout Asia, and available in most supermarkets, these round to oblong fruits have a hairy appearance with thick white flesh and sweet taste when young. Upon maturation, it develops a waxy coating tasting mild and grassy.

It is prepared into curries, stir-fries, and soups, serving as a common ingredient in Chinese and Indian dishes. It has a long shelf life due to its waxy coating and can thrive five months in a cold place. The sliced ones would last until a week in a fridge.

Indigenous to Asia, this small, oblong fruit has a dark green body, with several cracks. Though the flesh tastes sour, the unripe and semi-ripe fruit is eaten raw and also cooked into curries. The ripened snap melons, on the other hand, are used in making juices and desserts.

The fruit also has some traditional medicinal uses from helping in digestion to addressing urinary tract problems.

Commonly called Christmas melon, this oval-shaped fruit, originating in Spain, possesses a thick green rind, and a pale green or white flesh, resembling a small watermelon. It has a mild-melony, creamy flavor, while its sweetness is equivalent to honeydew melon. The fruit attained its name since its long shelf life helped it remain fresh throughout Christmas when shipped from Brazil to North America and Europe. It is used in desserts, sauces, sorbets, and tarts, and stays good till six weeks when stored cold.

Casaba, a part of the winter melon family, has a close relationship with the cantaloupe and honeydew melon. However, it is not as sweet as the other two types. Round or egg-shaped, their thick skin appears golden yellow on ripening with a wrinkled appearance. The pale green skin has a creamy texture with a cucumber or pear-like flavor. One can have the fruit raw, eat it as a snack or salads, or even add it to sauces or soups. Available from late summer to winter, casaba in its cut form remains well for about three days when refrigerated.

A cantaloupe-casaba hybrid, this oval melon has a hard, yellowish-green skin, with a ribbed pattern, and a waxy texture, particularly when ripe. The orangish flesh with a seed sac in the middle has an immensely sweet taste. Crenshaw melon is not durable enough, required to be consumed within a week of ripening. Besides, eaten fresh, they are a part of salads, or appetizers or even prepared into sorbets. Though available from July through October, the peak season spans between August and September.

Gac melon, indigenous to Southeast Asia, is oval-shaped, with a spiny skin, green at the onset, changing to yellow, then orange, and ultimately red upon ripening. It has a mild, earthy taste similar to avocado and lacks sweetness, which is why it is not eaten fresh and is mostly cooked. The melon is used in preparing curries, soups, and stews. In Vietnam, the aril or fleshy seed covering is combined with sticky rice to prepare a traditional red-colored dish served in festivals. While in Thailand it goes as a topping on ice creams.

Because of its high nutritional value, it was also a part of traditional medicine in Vietnam and China.

The horn-like spines on the fruit’s body earn it the name horned melon. Indigenous to Central Africa, it is presently grown in other parts too including Australia, New Zealand, and the United States. Its green skin turns orange upon ripening. The flesh has a lime green color, and a jelly-like texture, closely similar to pomegranate or passion fruit. The seeds, as well as the peel, rich in fiber and Vitamin C, are edible. One of the smallest melon types, it is made into salads, smoothies, salsas, and cocktails. Though available year-round, summer, and spring is the best time to get them.

Originating in China, this is one of the several honeydew melon varieties, with white skin, and a pale green or white sweet, juicy flesh. Rich in protein, and Vitamin C, it is ideal for eating raw and adding to salads. One could get these melons throughout the year. Chinese sources reveal that U.S. Vice President Henry A. Wallace introduced them to China.

A French cantaloupe grown in 1920, in France, it is as small as a softball.  Smooth-textured, it has a greenish-white skin, and an orange flesh. It replicates the cantaloupe in taste too, but is sweeter, with a more robust aroma especially when cut. This variety remains unsuited for cooking, mostly eaten out-of-hand for breakfast, added to salads and several other desserts, prepared into drinks, or even served as an accompaniment for savories. It is cultivated widely in North Africa, but its production remains limited in the United States.

Alternately known as snow melon or Chinese Hami melon, it originated in China’s Hami city in the Xinjiang province. Round or oval, its skin color could vary from white to yellow or even brown, with a netted appearance. The light orange flesh is juicy and crisp, closely similar to cantaloupe, though a little sweeter. Besides eating for breakfast, they even add to fruit salads, other desserts and beverages. The seeds are often fried, and the rind pickled. The ripe or cut melon can be refrigerated for three days.

Originating in India, and eventually introduced to China as early as the 14th century, it plays a prominent role in several Asian cuisines. It has an oblong shape with a yellowish-green skin turning to yellowish-orange upon maturation. The Chinese kind appears smooth, while the Indian variety has a bumpy skin. Bitter melon possesses a cucumber-like watery texture, and slightly peppery flavor, getting more bitter and harder as it ripens. They are cooked to make curries, stir-fries, and even used for preparing soups.