13 of the Best Types of Onions

Onion, the edible bulb of the plant Allium cepa, is one of the most common vegetables, and widely grown food crops across the globe with China, India, and the US being the leading onion producing countries in the world. 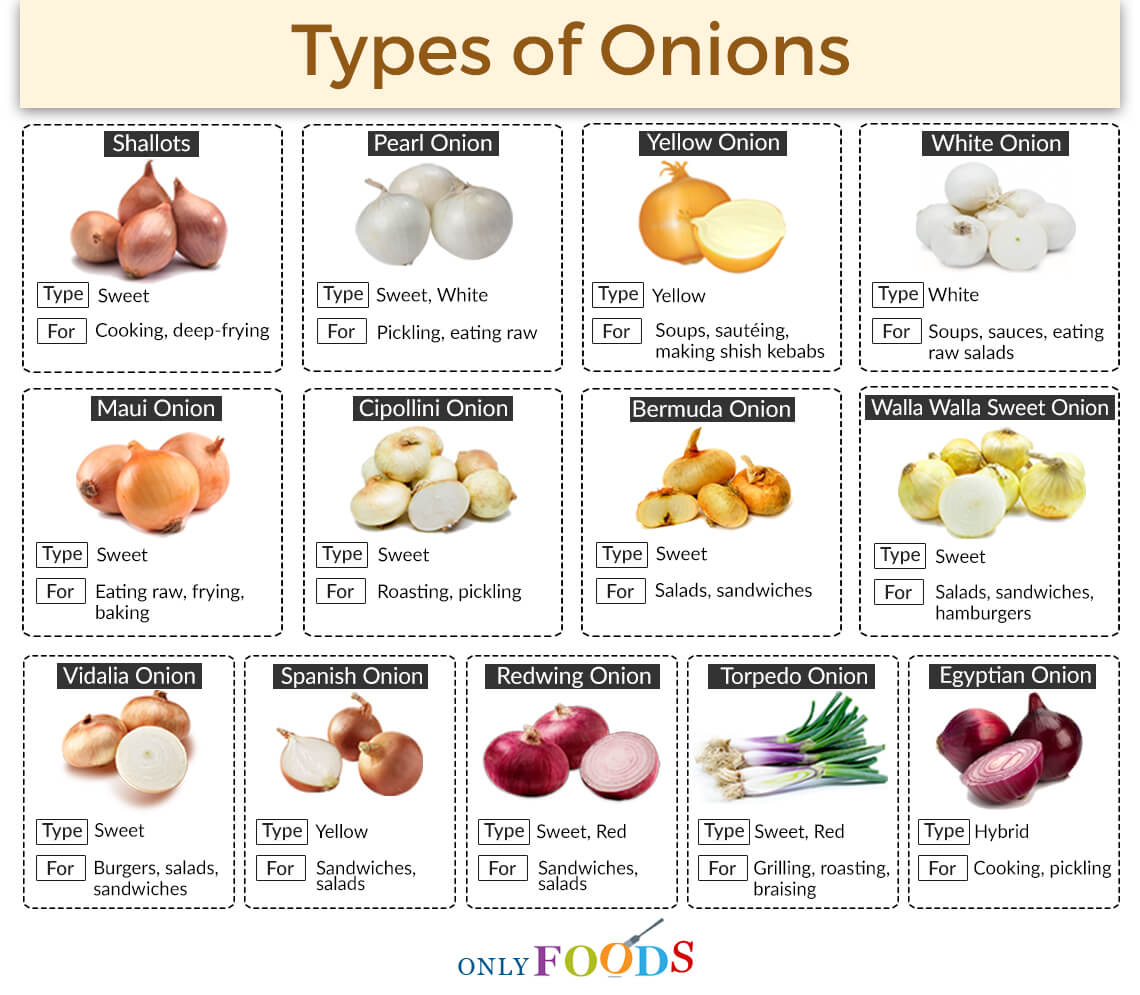 13 of the Best Types of Onions

There are several varieties of onions out there, and each of them is known for its culinary uses. While they can be cooked or used as an essential ingredient to add flavor to spicy dishes, onions can also be used for making pickles and eaten raw as part of a salad. They are typically classified based on their color:

1. Yellow or brown onions: An all-purpose type, these onions are the most popular (comprising 87% of the onion production) in the US. They are most suitable for eating raw and lightly cooked, grilled, caramelized, or sautéed.

2. Red or purple onions: These are the second-most popular (accounting for 8% of the onion crops) in the US and are known for their use on sandwiches and salads.

3. White onions: These are slightly less popular as compared to the other two varieties and make up for 5% of the total onion production in the US. They are used in Mexican cuisine, white sauces, and pasta and potato salads.

Apart from the above, they can also be divided into two groups according to their characteristic taste and flavor:

1. Sweet onions: Although these do not necessarily have high sugar content, they have a milder flavor because they have lesser sulfur than pungent onions. Due to their ‘sweet’ taste, they are used in salads or as a garnish.

2. The regular pungent onions: The pungency in these onions occurs due to the presence of high amounts of sulfur compounds. They are better for cooking, and their strong flavor mellows out when they are cooked. Different Types of Onions with Their Uses

Different Types of Onions with Their Uses

The shallot is a small, elongated variety of onion that looks more like garlic than an onion. Instead of rings, it has multiple cloves arranged one inside the other so when you cut it, there are no rings like in a regular onion. A shallot can have different skin colorations, varying from rose-red or gray to a golden brown, with a sweet, mild flavor having a hint of garlic. It is believed to have originated in Southwest and Central Asia, and it was later introduced to the eastern Mediterranean and Indian subcontinent. It has been traditionally used for cooking many Sri Lankan dishes.

Best for: Cooking, deep-frying, using it raw in salads or dressings

The pearl or baby onion is a small, marble-sized (with a diameter of 0.5-1.5 in) variety of onions noted for its mild, sweet flavor. It has been traditionally used in American dishes like succotash and sweetly flavored Indian pickles and relishes.

Best for: Pickling, eating them whole as a topping

The yellow onion is a strong-flavored variety that has a papery skin with a pale golden or yellowish-brown color. It probably originated in Asia, but now has spread throughout the world via colonizers and traders. Currently, you can get yellow onions in small, medium, and large sizes.

It is somewhat sweeter and milder in flavor than a yellow onion, and its size ranges between 9 and 11 inches. The white onion, characterized by a white flesh and white papery skin, has a short shelf life and may last for about two days (up to 30 days, if refrigerated). It is traditionally used in Mexican foods.

Best for: Using in soups, stews, and sauces; adding flavor and crunch to relishes, salads, and dressings

It is a medium-sized onion that may have a globular, elongated, or bulky shape. Its crisp, juicy, white flesh is covered with a thin, papery, pale yellow or brown skin. Popular for its sweet, mild flavor and crunchy texture, the Maui onion has been grown on the slopes of the dormant volcano Haleakalā on the Maui island in Hawaii, since the 20th century.

The cipollini is a small, flat-shaped spherical onion that is thought to have originated in Italy. Its pale yellowish flesh is covered with dry, papery skin. This variety, favored for its slightly sweet flavor, has been traditionally used whole in sweet and sour sauce in Italian cuisine.

The Bermuda onion is a small onion type with a flattened shape. It can have either yellow or white, thin, papery skin and is valued for its sweet, mild flavor. It was initially brought from the Canary Islands during the late 19th century. Some of the varieties of Bermuda onion include Yellow, White, and Crystal Wax.

Best for: Eating raw in salads or sandwiches

It is a large onion type with a firm, round shape and thick, brilliant maroon skin. Its flesh gets paler as you reach the center and gives you a slightly sweet flavor. It has an excellent shelf life and can be stored for months.

Best for: Consuming raw in sandwiches and salads

The Vidalia is a small- to large-sized onion with diameters ranging from 1-4 inches. It has been named after the town of Vidalia in Georgia, where it was initially grown in the 1930s. It is known for its sweet, mild taste throughout the globe.

Best for: Serving raw on burgers, as well as in salads or sandwiches

Best for: Eating raw or using in sandwiches, salads, or as a garnish

The Walla Walla sweet onion is a big, round onion variety that can grow up to 5-6 inches in diameter. It comes in a whitish or light brown skin and a mild-flavored juicy flesh that has low sulfur content. As the name suggests, it was first grown and developed in the Walla Walla County in Washington in 1900 by a French soldier named Peter Pieri.

Best for: Eating raw in salads, sandwiches, or hamburgers

It is a medium-sized onion type with elongated, torpedo-shaped bulbs that measure about 3 inches in diameter. Underneath its red papery skin is a purplish-white flesh that has a mild, sweet flavor. The torpedo onion was first cultivated in Tropea, Italy, by the Phoenicians thousands of years ago.

The Egyptian onion, also called tree onion, has marble-sized bulblets that grow on the stalk. These bulblets measure about 0.2-1.2 inches in diameter and are quite strong in flavor. It has been assumed that the Egyptian onion was first brought to Europe by the Romani people. This onion variety has been traditionally used as an important ingredient in Korean scallion dishes.

Q.1. Which is the healthiest type of onion?

Ans. Red onions are often considered the healthiest type due to their high anthocyanins and quercetins levels that help with arthritis, diabetes, and the side effects of cancer treatment to some extent. Shallots and yellow onions come close behind with their own nutritional content and antioxidant effects.

Q.2. What are some of the rare types of onions?

Ans. The Egyptian, and potato onion are quite rare, though they are gradually gaining more popularity and a wider availability.

Q.3. Which type is used for making fajita?

Ans. For stronger-flavored traditional fajita, use the white or yellow onion types. You may also use the Vidalia or red types if you want the dish to be milder.

Q.4. What varieties are most suitable for stuffing?

Ans. The yellow onion, being an all-purpose option, is commonly used for stuffing.

Q.5. Which types are ideal for caramelizing?

Ans. Yellow onions and sweet onions, such as Walla Walla and Vidalia, are best suited for caramelizing as they take less time, and hold their texture well.