Feijoa fruit is a delicious fruit with lot of health benefits in it. The fruit finds its use in culinary delight in many ways. The yummy, egg-shaped fruit is grown in many parts of the world and is very popular for its taste and nutrition content. It is also commonly known as pineapple guava. 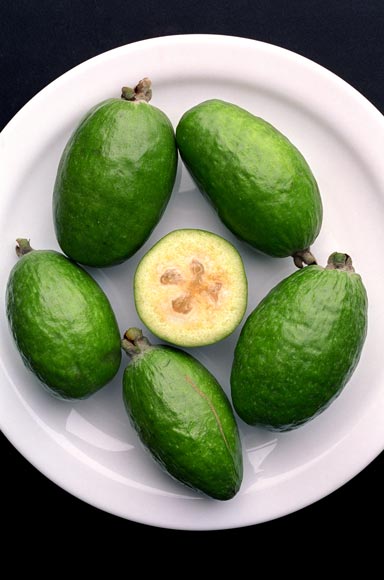 Looks : Feijoa fruit looks like one of the jackfruit family species. The best ones are those which have no bruises on the skin of the fruit and even coloured all over.

Taste : Feijoa tastes quite like the guava with a tinge of strawberries tangy sweetness, minty fresh, and pineapple juicy. 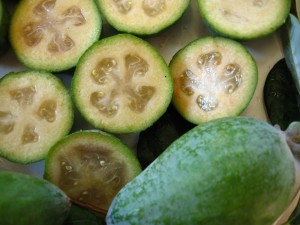 Feijoa is a pulpy and juicy fruit. It is of a chicken egg’s size and is of ellipsoid shape. The fruits mature during autumn. It has a sweet aroma and sour-sweet taste. The fruit pulp is opaque near the fruit-skin and the inner apart of the pulp is glutinous with seeds.

Feijoa is also commonly called pineapple guava since it resembles to a guava in looks and the pulp tastes like a pineapple.

Seeds of the Feijoa fruit is usually not consumed separately, but also not thrown away. The seeds are often used as natural body scrub and exfoliating agent.

Feijoa plants usually grow about 15ft tall. The leaves are rectangular in shape. Bark of this tree is greenish grey. The plants bear very sweet smelling beautiful white flowers. These plants need partly sunlight and partly shade to keep them away from the heat. These plants are frost tolerant, though the fruits are not.

Feijoa is a very nutritious fruit. Know the nutrition content in every 100gm of a Feijoa fruit from the chart below:

There are five varieties of feijoa fruit known as of yet. 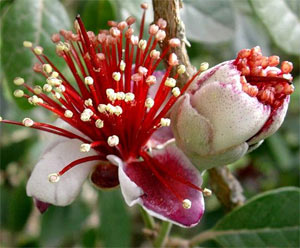 Feijoa is a very nutritious and useful fruit. It makes a very healthy diet. Count the health benefits of feijoa

Feijoa fruit is a very nutritious fruit. The fruit is very useful also in maintaining a beauty regime. Let us find out some useful and interesting facts about the fruit below: 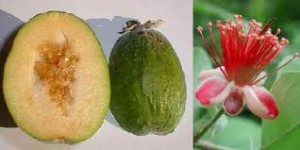 Feijoa fruit finds its place in kitchen, dining table, and also in the dressing unit. Find out its different uses below:

Soil :  Feijoa does better in organic soil. The fruit plant has been observed to do best in soil that is good in pH of 6.2 in it.

Drainage :  The plant does not need much of watering. Water it only when the soil surface gets dry. Proper drainage is very important for feijoa shrubs. It is drought resistant but cannot tolerate standing water.

Climate :  Feijoa requires low humidity, partial sun, and partial shade. It can tolerate it needs an annual rainfall of 762mm to 1016mm. The plant can tolerate lower temperature about 12degrees to 15degrees F.

Sowing :  Sow the feijoa seeds in a hole that is of equal depth of the root ball, twice of its size in width. Water the soil moist and then sow the seeds.

Fertilizer :  The plant do not need fertilizer for its survival, but providing some from time to time increases the fruit production rate and enhances taste of the fruit also.

Pruning :  Pruning the fruits delicately from the plant after harvest accelerates fruit productivity. The dead branches need to be removed regularly to make it look good and it is proven that well maintained plants bore better fruits than others. 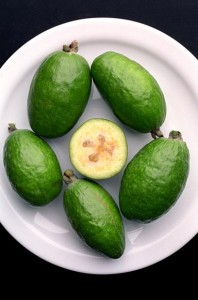 There no side effect reported as of yet of consuming feijoa internally or externally. People who are allergic to Vitamin C should avoid the fruit though.