Atemoya is a hybrid of 2 native American tropic fruits – sugar apple and cherimoya. Its name is derived from an old mexican name for sugar apple – ‘ate’ while ‘moya’ comes from the cherimoya fruit. It belongs to the Annonaceae family. 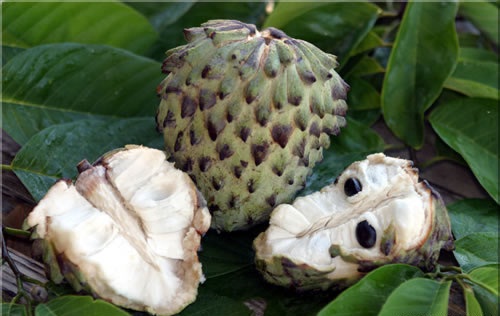 This fruit is known by different names in different parts of the world. In Taiwan, it is called Pineapple sugar apple, Anona in Israel, Mamon in Cuba, Chirimorinon in Venezuela and Achta in Lebanon. 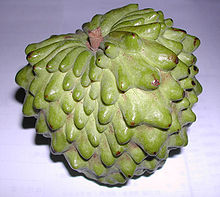 In 1908, the first cross of this fruit was developed by horticulturist P.J. Wester at the USDA’s Subtropical Laboratory (Miami,US). In 1917, at the Plant Introduction Station in Miami, Edward Simmons grew the hybrid fruit successfully. The tree survived at 26.5ºF temperature, which shows its hardiness that has come from cherimoya.

Atemoya is a fast growing tree. It may reach about 25 – 30 feet in length if properly cultivated.

The ovate shaped green leaves are hairy at the beginning and gets smooth as it matures. As far as the shape is concerned, the leaves are generally variable in a single tree. Leaves are around 3 – 8 inches long and 1 – 3 inches wide. Leaf drop rate depends on the weather conditions.

Flowers come out from leaf axils in clusters of 1 – 4 during mid spring to late spring.

Atemoya trees produce fruits in 3 – 5 years. The fruits are generally green or light green in color, and turn yellowish green as it ripens. Fruits are round or oval shaped and around 7.5 to 12 centimeter in size. It weighs around 250 – 470 grams. The outer surface of the fruit is not smooth.

The edible custard-like flesh of Atemoya is creamy white. Each fruit carries around 10 – 30 hard, shiny, brown colored seeds inside.

Atemoya is native to South America. They are also found in Central American countries, Caribbean islands and United States (especially in Florida).

This tree grows well in tropical and subtropical regions.

Growing this tree is not a hard task as it can tolerate low temperatures. Here is a brief description about the cultivation conditions:

The ripe fruits are supposed to be clipped from the branches. Frequent picking is good for the growth of fruits.

The flesh of this fruit tastes almost similar to ‘fruity vanilla’. 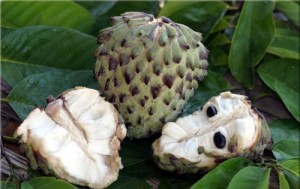 This fruit reduces the risk of cancers and cardiovascular diseases. It also helps to keep the blood pressure in control.

Atemoya seeds contain toxins and must be removed before eating. If the seeds get damaged, its toxins may reach the flesh.

Here are some interesting facts about Atemoya:

This fruit is available in most fruit markets around the world.

This fruit can be kept in a refrigerator for at least a month, but to gain maximum health benefit, its better if consumed fresh.

Here are some pictures of this tree and fruit: 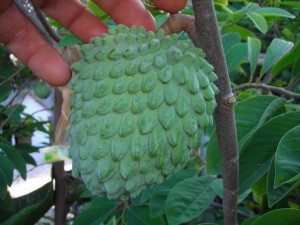 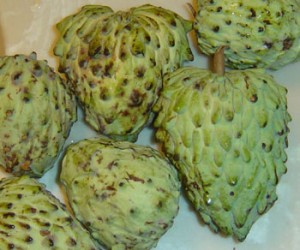