20 Different Types of Grapes to Eat and Make Wine

Grapes are juicy fruits with a sweet-tart flavor and a variety of shapes. When it comes to size, they show diversity too, as some could resemble a small golf ball, while others are as tiny as a pea. Of the 10 000 grapes worldwide, most of them come from Spain, France, and Germany. More numbers are evolving of late, with many new hybridized varieties created through grafting and other methods.  From a botanical standpoint, they are considered a berry, belonging to the Vitis genus. 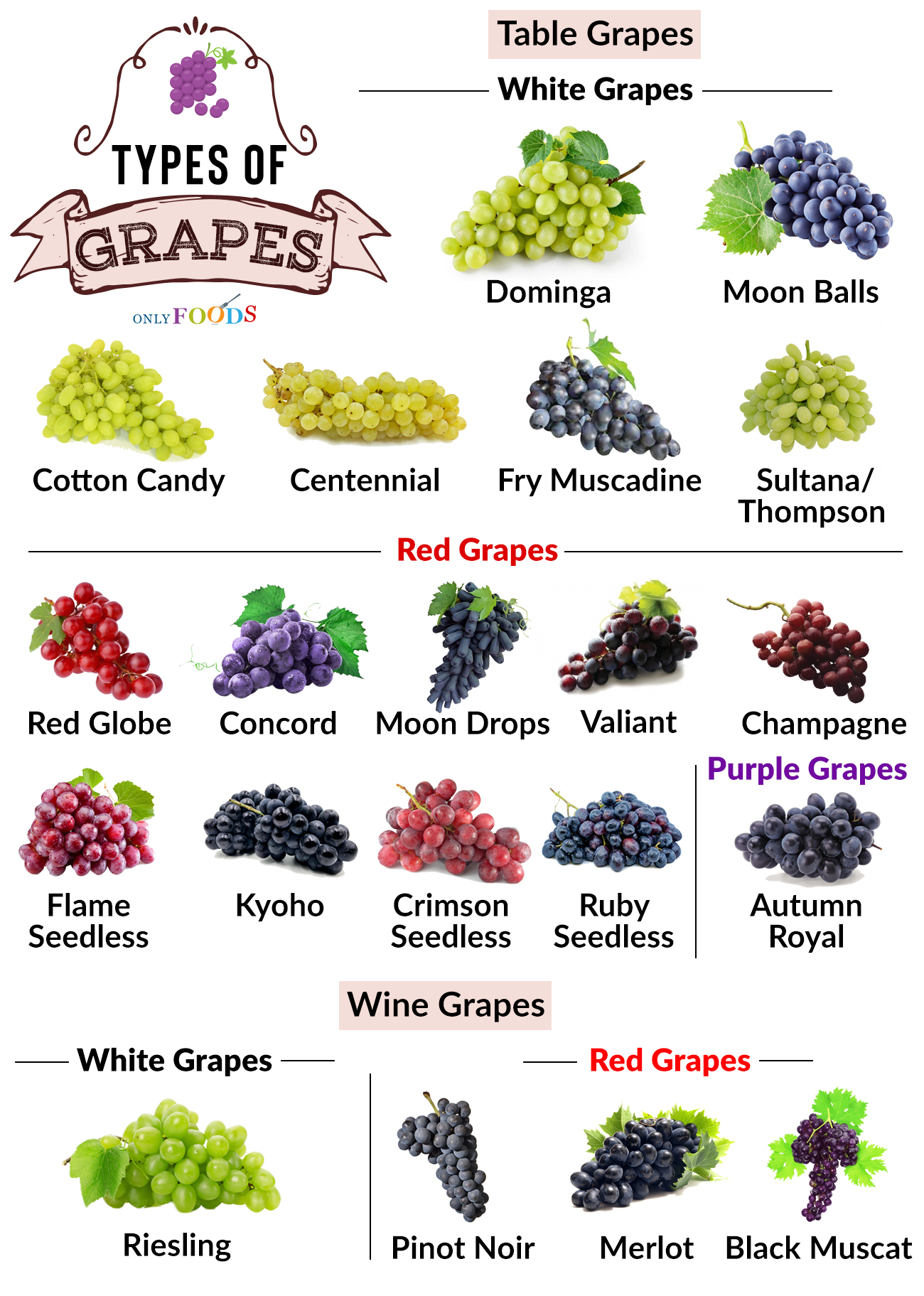 20 Different Types of Grapes to Eat and Make Wine

They are mostly classified into two groups: the table grapes and the wine grapes, each varying from the other in different aspects. The more commonly eaten kind is the table grape that is large with a thin skin and small-sized seeds. Wine grapes are smaller with thick skin and more sugar levels.

Going by the literal meaning, seeded grapes have seeds, and the seedless ones come without it. However, it is worth mentioning that a small number of seeds may be found in the seedless variety. Most of the grapes we consume are seedless, more specifically, the table type, while wine grapes often mostly have seeds. When it comes to health benefits, the seeded ones rank a little higher than the seedless kinds.

Dominga is a seeded grape with a yellowish-skin and a sweet, pleasant taste. It ranks high when it comes to nutritional value primarily because of its rich antioxidant content.

One can eat it out of hand, include it in a fruit salad platter, or even make juices.

These large, seeded, round grapes resemble a ball. Indigenous to South Africa, they are mostly in season between February and March. They have a thick green skin, sweet sugary flesh, and white edible seed. Because of their firm, crunchy texture, this variety has a good shelf life, stored for a considerable time.

One can eat these grapes raw or even use them in preparing juices, jellies, and salads.

This unique, seedless green grape variety developed in 2011 in California by horticulturist David Cain and his team. It resulted from hybridizing two grapes species that lead to its unique cotton candy-like taste, as its name suggests. It is mostly in season between August and September, refrigerated for about a week.

Its uses include snacking, preparing juices, and jellies.

Harold P. Olmo was responsible for creating this variety at the University of California in 1966. These seedless grapes have a thin, yellow skin and a firm, sweet-tasting, fruity flesh.

They can be eaten out-of-hand, baked, and used in salads.

Fry Muscadine, developed in the University of Georgia by R. Lane, has been in the markets since 1970. They are initially golden-brown, eventually turning yellow upon ripening. Their size corresponds to a cherry tomato, and these seedless grapes have a sweet, crispy taste. They are mostly in season during the September- October period.

Because of their delectable taste, they find a prominent place in desserts and juices.

Small and light green, this oval-shaped table grape is popularly grown in California. Its Persian origin earns it the name sultana. On the other hand, it is even called Thompson after William Thompson, who made it famous in the United States. Certain Commonwealth countries also refer to the raisins made from this or larger seedless varieties as sultana raisins or just sultanas. This sugary grape has a sweet, earthy, raisin-like flavor when dried.

Most of the commercial raisins are made from the sultana grapes. Their other prominent uses include snacking and preparing cakes and buns. This kind is even used to make white wines as well as the light-bodied Turkish sultaniye wines.

It is a large, round variety of seeded grapes with a sweet taste and firm, crisp texture. As its name suggests, it has a rosy red body all because of its high antioxidant properties. Australia and the United States rank high in the production of this grape, most of which is exported to Asia.

The red globe is eaten fresh, juiced, and even dried to make raisins. Because of its immense size, one can freeze and use it as ice cubes to keep beverages cold and enhance their taste.

It gets its name from Massachusetts’ Concord town, where it originated in the 1840s. Round and thick-skinned, these grapes have a bluish-black appearance, with big seeds.  They are sweet and aromatic, with an occasional tinge of sourness.  Concord mostly comes into the markets during fall, between September and October, with a storage life of about two weeks.

One can make them into juices, pies, jellies, candies, and grape-flavored beverages. Besides being a table grape, they even go into preparing wine, particularly the kosher variety. Concord wine is mostly sweet though drier versions are available too.

These grapes stand out because of their unique shape and fantastic taste. They appear long and tubular, with a prominent dimple on one of the ends. Sweet and crunchy with firm flesh, moon drops stay good for long and do not lose flavor when frozen. Their season spans between August and October, though the availability remains limited.

A popular snacking grape, they even do well when stuffed with whipped cheese or other fillings due to their big size.

Valiant is big with a bluish coloration and plumpy body. This seeded type popularly grown in Canada and Alaska is renowned for its hardiness, capable of surviving freezing temperatures. They have an easily removable skin alongside a sweet, sugary flesh, closely similar to the concord.

The valiant grapes can be consumed raw and even prepared into juices and jellies.

One of the most popular table grape varieties, flame seedless, has a round, plump appearance with a pink or red body. They mostly taste sweet, but may also have a tinge of tartness alongside a crunchy texture. John J. Kovacevich of Arvin introduced this kind to the United States in 1973. Their long shelf life makes these hardy grapes easy to refrigerate and store.

They can be eaten raw, dried, or made into juices.

Kyoho, originating in Japan, is a grape as big as the size of a plum. Its development dates back to the 1930s by crossing the Centennial and Ishiharawase varieties. They are large, and blackish-purple, also having big, bitter-tasting inedible seeds. Their skin, though not eaten traditionally, can be separated from the fruit. The juicy flesh is mildly acidic with a sugary taste.

Traditionally the grapes are peeled and made into a dessert and juiced and blended into the chuhai cocktails. It also serves as a topping for cakes and sandwiches and even made into candies and jellies.

As evident in the name, these seedless grapes have a dark pink or light red skin with a green-white flesh. Originating in 1989 in California, they have a slightly elongated appearance with moderate crispiness. These grapes taste sweet and juicy with a tinge of tartness.  The thick-skinned peel tends to be a bit chewy but not bitter. They are popular in supermarkets mostly sold in winters, with their long shelf life being one of these grapes’ prime advantages.

They are eaten raw and also made into desserts, jellies, and juices.

They are among the smallest varieties of grapes, similar to the size of a pea. Though named Champagne, they do not fall into the category of wine grapes. They have a sweet-tart taste with a soft, crunchy texture. You could mostly find them from July to September.

The champagne grape can be consumed fresh, eaten in salads, baked, and even used as a garnish.

Ruby seedless, developed in the University of California, is a seedless table grape variety having a ruby red body. Sweet and juicy, it has a crispy texture.

One can eat them fresh, or even dry to make into raisins.

Fruit breeders Ron Tarailo and David Rammin developed this grape variety in 1996 in California’s Fresno. They are one of the largest seedless types having a purple-black body and a yellowish-green flesh. Sweet and juicy with a rich aromatic taste, these ovaloid-shaped grapes are known for their firmness and crunchiness. Their primary season lies between late summer to early fall.

Their uses pertain to sorbets, juices, salads, jams, and jellies.

Besides red and white, the rose grape is another classification of the wine grape type. However, this is not a different variety but refers to some of the black or red-skinned grapes involved in preparing the rose wine.

One of the most famous seedless red grape varieties used in making the light-bodied Pinot Noir wine, it originated in France’s Burgundy region.  Pinot translates to pine in French, exactly defining the shape of this thin-skinned fruit that resembles a pine cone when it remains in tight clusters. It has an overall earthy flavor, with tones of strawberry, cherry, caramel, rose, and currants dominating.

Besides the Pinot Noir wine, it also goes into the making of other red wines and various sparkling white wines like Champagne. It can be used as table grapes too due to their thin skins, eaten fresh and made into non-alcoholic beverages, jellies, and jams.

It is another popular French wine grape originating in the Boudreaux region of France. At present, its fame has spread throughout Europe, America, and Australia. Merlot is a derivative of “merle,” a French name for the blackbird. This name corresponds perfectly to the grape’s color since it has a dark blue body. This seeded grape is soft and fleshy with a fruity flavor, having tones of plum, blackberries, cocoa, and black cherries.

Its creation dates back to 1850 in England by crossing the Muscat of Alexandria and Schiava Grossa. It is referred by various names like Black Hamburg and Golden Hamburg in the United States and Muscat de Hambourg in Italy. Large in size with a bluish-black color, this seeded grape is sweet and juicy, generating a floral aroma.

In France, it is primarily made into dessert wine, while in Europe, it is used for producing dry red wines. In China, black muscat often goes into the making of table wine. One can also eat it fresh as a table grape, or use it as accompaniments with savory dishes like a cheese platter.

Riesling, primarily grown in Germany, alongside Canada and New York, is a seeded green grape variety, mostly in season from November to January. Highly acidic and sweet, these aromatic grapes have a floral undertone, making for an integral component in preparing the wine of its namesake.

They even go into making the dessert, sparkling white, and bone dry wines. Though not eaten fresh, they can be juiced to prepare non-alcoholic beverages.

Q.1. What are hybrid grapes?

Hybrid grapes are produced by crossing two or more varieties of grapes of the same species, mainly Vitis vinifera. E.g., Pinotage is an outcome of crossing the Cinsault and Pinot Noir.