19 Types of Bananas and What to Do With Them

Bananas listed as exotic fruits until the first half of the 20th century, has become increasingly popular nowadays. They are readily available in most grocery stores in the United States at a low price. These fruits have versatile uses in their unripe and ripe form, alongside easy storage requirements. They are also high in nutrients, particularly potassium and vitamins, protein, and a lot of minerals, making them an ideal health fruit. 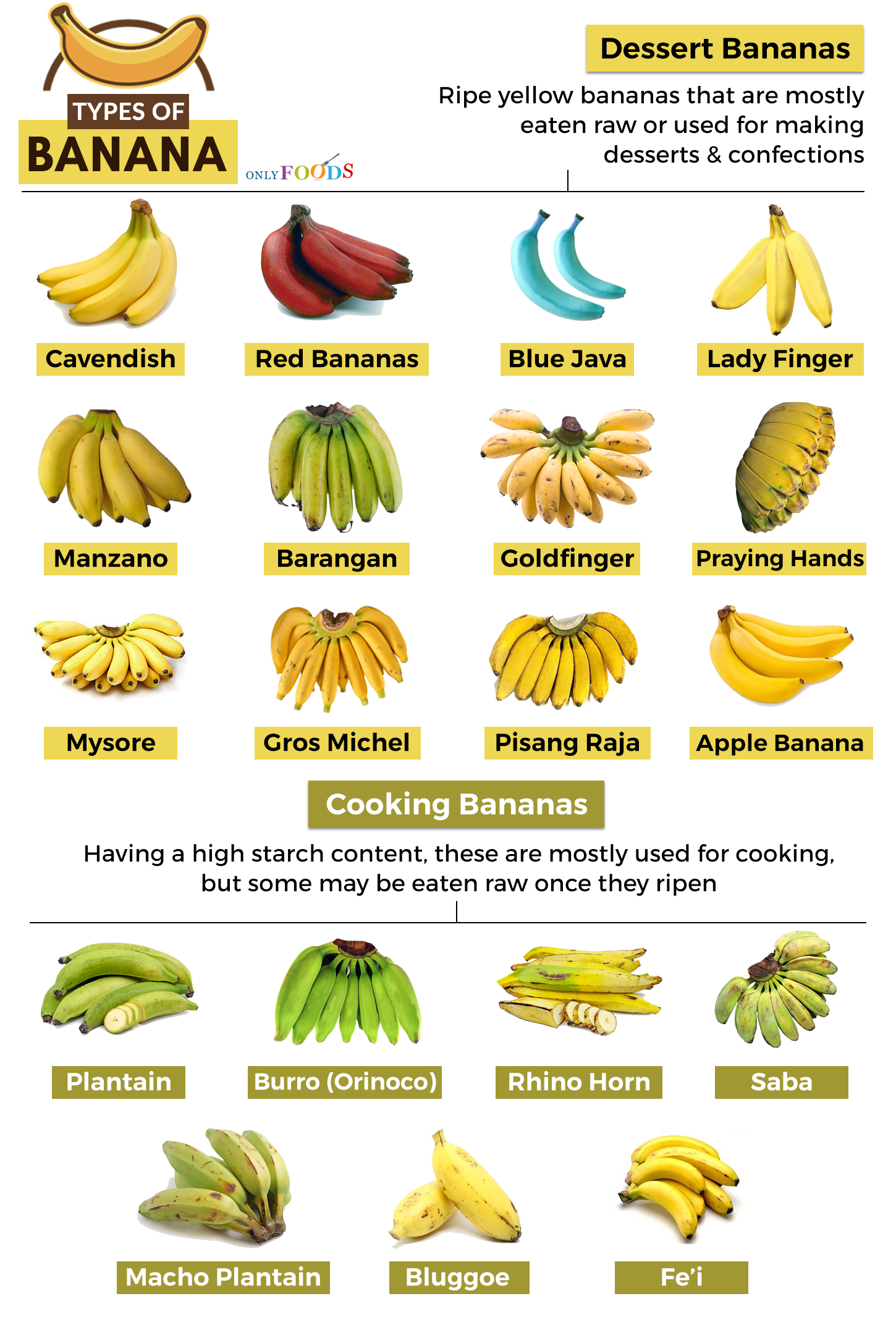 19 Types of Bananas and What to Do With Them

There are more than 1000 kinds of bananas contained in about 50 subgroups, with the two broad divisions being dessert bananas and cooking bananas.

Green vs. Yellow vs. Red Bananas

Bananas come in skin colors of green, yellow, and red, each varying from the other in shape, texture, and overall taste.

Green bananas or cooking bananas as synonymously called are mostly green in its unripe or semi-ripe form. They are a healthy choice for those looking to cut down on sugar.

Yellow bananas, the most popular among the lot, are the commonly eaten ones, as they are soft, sweet, and sugary. While many green bananas become bright or dark yellow in their ripened form, some are yellow throughout.

Red bananas, a triploid cultivar, of the wild varieties, are mostly smaller, sweeter, and softer, than the yellow ones, also having a high nutritional value.

Different Varieties of Banana with Their Uses

Types of Dessert Bananas to Eat

Dessert banana is not a distinct category. In Europe and America, yellow bananas mostly eaten raw or made into desserts, are called so.

This is the most popular and familiar of all bananas, available in most grocery stores in the United States. They go through different ripening stages, green at the beginning, a light yellow shade after that, then turning to deep yellow with a few brown spots, and finally wholly brown on softening. These bananas are sweet and creamy eaten raw, sliced into salads, baked, and used in preparing fruit compotes. Overripe bananas are often refrigerated and made into banana bread and smoothies. Of the several cultivars it has, the notable ones include Gran Nain and Dwarf Cavendish.

They have a reddish-purplish or maroon skin at the onset that becomes yellowish-orange as it ripens. The red bananas’ pinkish-orange flesh is softer and sweeter than most Cavendish varieties of yellow bananas. Some of the several common names they are known worldwide include Jamaican red banana, Red daca, and Claret. Besides eaten raw, whole, one can even chop and add them to fruit salads and other desserts. Red bananas are also toasted, fried, and baked. When it comes to nutrition, they rank higher than most yellow bananas, even having a longer shelf life.

Synonymously known as ice cream bananas since they replicate the flavor of vanilla ice-cream, this type has a bluish peel transforming to pale yellow upon ripening. The white flesh within is sweet and creamy. They can be eaten fresh, added to custards, frozen to prepare ice cream and other desserts, or even cooked. Hardy and tolerant to cold, blue java is popular in South East Asia, Northern Australia, and Central

Small, short, and chubby, they are popularly known as baby bananas. However, their other names include date bananas, fig bananas, and sugar bananas. Not more than 5 inches in length, they have a light yellow, thin peel, and white flesh. They are sweet and creamy with a honey-like flavor, eaten out-of-hand or even included in desserts, baked, and prepared into smoothies. Overripe ones are made into banana bread. They are more expensive than most other varieties.

Manzano in Spanish means apple trees and these bananas have primarily been named so due to their apple-like flavor. They are alternately referred to as apple bananas too. Short and chubby, their thick, yellow skin gets black on ripening, and that is when they taste the best also. They are mostly grown in Central and South America, Caribbean Islands, and Mexico. These bananas make for a useful component in desserts, alongside eaten raw. Rich in Vitamin C, fiber, and potassium, a manzano a day, would indeed be good for one’s health.

It has a yellow body with tiny black dots, alongside a white flesh devoid of seeds. Sweet to taste, with a mild flavor, one can eat this banana raw. In the tropics, it has gained immense popularity as a dessert banana.

Goldfinger banana developed in 1988 by scientists in Honduras is a unique hybrid dessert variety possessing pest-resistant properties. It is green initially, gradually changing to yellow upon ripening. The banana has a sweet taste, with flavors of apple evident. When green, it is cooked and even made into chips. On the other hand, in its ripe form, it is eaten raw and widely used in desserts. Its popularity in Australian markets is increasing rapidly. However, it is yet to make a mark in Europe and North America.

They are named so because of their appearance, since two adjacent “hands” remain fused to one another, looking like a pair of praying hands. These bananas are initially green, ripening to yellow with black patches. Their yellowish-white flesh has a firm, starchy texture, with a semi-sweet vanilla-like flavor.  They can be stir-fried, baked, made into chips, or added to rolls, though the best time to cook them is when they turn yellow. The overripe ones become soft, and one can eat them raw.

Referred to as Nanjangud Banana or Nanjangud Rasabalehannu locally, it has its roots in Karnataka’s Chamarajanagar and Mysore districts.  These thin-skinned bananas are short and fat tasting sweet with touches of tanginess. Besides consumed raw, their unique flavor has made them occupy a prominent place in desserts. It gained GI status in 2005 to be grown only in Nanjangud and its surrounding areas since their black soil gave the banana its distinct aroma and flavor.

Alternately known as Big Mike, Banano, and Guineo Gigante, these thick-skinned, greenish-yellow bananas were immensely popular until the 1950s. Their production declined rapidly after the plants were struck with Panama disease, eventually replaced by the Cavendish. Sweet and creamy, with a strong aroma, they serve as an excellent banana for making pies. However, they remain rarely available at present.

One of Southeast Asia’s banana cultivars, also called Musa Belle and Apple Banana, it is immensely popular in Indonesia. Yellow with black spots when ripe, the banana has orange-red flesh, with a sweet, creamy, apple-like flavor and grainy texture. Besides consumed fresh, it is an excellent addition in fruit salads and even used to make pancakes and fritters.

Though apple banana is a term referred to many other types with an apple-like flavor, it is also a distinct variety. Also called Candy Apple Banana, they are indigenous to Hawaii’s tropical rainforest region. Noted for their sweetness, they have a firm flesh with touches of pink. Besides eating them fresh, they form an excellent component for snacking and desserts, as they do not brown quickly like other bananas.

Cooking bananas are mostly put to culinary use, primarily because of their starchiness. However, one can consume them raw as well when ripe. They are commonly referred to as green bananas or plantains, though not all belong to the group of true plantains.

Plantain is a cooking banana that changes color as it ripens, like most other varieties. Green plantain is firm, and grainy, mostly tasting like potatoes. The ripe yellow ones are soft and starchy but sweet. On the other hand, overripe plantains have a black body and are the sweetest. They can be cooked into curries, fried to make chips, roasted, and steamed.

Also known as chunky bananas, these small bananas have a flat, angular shape. Their thick, dark green skin becomes deep yellow, with black spots when ripened. The yellow or creamy white flesh is soft throughout but firm at the center. It has a lemony, tangy taste and can be cooked, dried to prepare chips, baked, or boiled. To eat these bananas raw, or add them to fruit salads or desserts, they must be allowed to ripen well.

Rhino Horn, the largest of all bananas, is also known by the names of African Rhino Horn, and Rhino Horn Plantain. It has a golden-yellow body with a curved, elongated shape, growing to about 2 ft. Besides being cooked, steamed, and baked, one can also eat them raw.

Saba banana, an integral part of most Philippine cuisine, is large with a square or angular appearance. They have a thick green peel initially, maturing to bright yellow. The flesh is dense, and white with a starchy texture, though lacking the firmness present in plantains. Upon ripening, they are sweet, with touches of peach and citrus. Cooked saba bananas taste like sweet potatoes. In the Philippines, they are processed to prepare banana ketchup. On the other hand, in Indonesia, and Singapore, dishes like pisang goring and kolak pisang are incomplete without them.

Macho plantain, widely grown in the United States, is commonly found in Florida. These green plantains have a sweet-sour taste, apt for stir-frying, roasting, and sautéing.

Bluggoe, a green cooking banana, appears large and straight. The flesh is firm, with a starchy texture and salmon-like flavor. Though eaten raw, when ripened completely, it tastes best when fried, prepared into curries, baked, or roasted. It is most prevalent in Thailand, Burma, southern parts of India, and East Africa.

These bananas have red or orange skin, particularly when ripe, and a yellow or orange pulp. They are known for their nutrition value, having high amounts of beta carotene. Since they are low on sugar and high on starch, they have an astringent taste, and cannot be eaten raw. Fehi gets increasingly delicious when cooked, boiled, and even baked.

Q.1. Which is the healthiest banana variety to eat?

Ans. Red bananas are considered one of the healthiest varieties too eat,due to their low-calorie, high vitamins, and fiber content.

Q.2. Which type of bananas are highest in potassium?

Ans. All banana types have high amounts of potassium, with the green ones surpassing most others. One cup of boiled green bananas has about 531 mg of potassium. In contrast, medium-sized yellow and red bananas have 422 mg, and 400 mg potassium, respectively.

Q.3. What type of banana is Chiquita?

Ans. Chiquita or Grand Nain is a banana type belonging to the Cavendish cultivar group. It is named so since the Chiquita Brands International produced it.