The Bitter Apple is a vine-like plant commonly found in Asia and the Mediterranean Basin. These plants have lemon-sized fruits which are known for their medicinal properties. 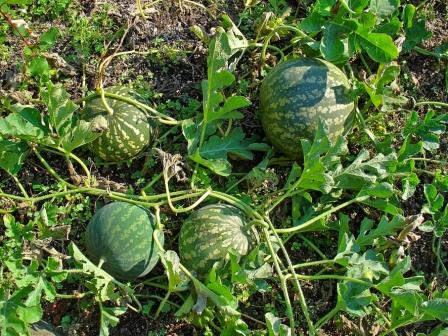 The scientific name for this plant is Citrullus colocynthis.

Bitter apple trees are also known by a host of common names, such as:

Stems: The herbaceous stems are angularly positioned and covered with rough hairs.

Leaves: The angular leaves are alternately located on long petioles. Each leaf is almost 5 to 10 centimeters in length and has around 3 to 7 lobes. Sometimes the middle lobe might have an ovate structure. The leaves have a triangular shape with many clefts. The leaves have a rough, hairy texture with open sinuses. The upper surface of the leaves are fine green in color and the lower surface is comparatively pale. 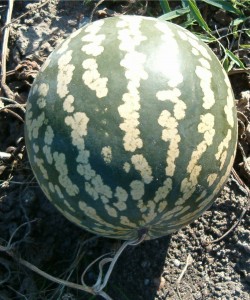 Flowers: The yellow-colored flowers appear singly at leaf axils. They are monoecious; the pistils and stamens are present in different flowers of the same plant. They have long peduncles. Each flower is also comprised of a yellow campanulate. The corolla has five lobes and the calyx is parted five ways. The female flowers are easily identified from the males by their villous, hairy ovary.

Fruits: Each bitter apple plant produces around 15 to 30 globular fruits having a diameter of almost 7 to 10 centimeters. The outer portion of the fruit is covered with a green skin having yellow stripes. The fruits may also be yellow in color. The ripe fruits are characterized by a thin but hard rind. The fruits have a soft, white pulp which is filled with numerous ovate compressed seeds.

Seeds: The seeds are around 6 mm in size, smooth, compressed and ovoid-shaped. They are located on the parietal placenta. The seeds are light yellowish-orange to dark brown in color.

Roots: The Bitter Apple plant has a large perennial root that sends out long and slender, angular, tough, rough vine-like stems. The stems are normally spread on the ground and have a tendency to climb over herbs and shrubs by their axillary branching tendrils.

Bitter Apple fruits and plant extracts are considered to be one of the strongest purgative agents. They are also known to cure tumors, cancers, ascites, skin and blood disorders, maintain bowel health, relief arthritic pain and reduce fever.

Annual rainfall: Bitter apple plants are highly xerophytic and grow well in areas with an annual rainfall ranging between 25 cm and 37 cm.

Soil pH: The soil pH for growing Bitter Apples should range between 5.0 and 7.8.

Soil drainage: The soil should be well drained.

How to grow Bitter Apples

Bitter apples are perennial plants that can be easily propagated from seeds. The best time to grow these plants is during the late spring months. It is better to pre-cultivate the plants in pots before actually replanting them outdoors. They grow very quickly and do not require much attention once the seeds have been sown.

Bitter apple plants are generally harvested from the wild plants. The fruits are collected when they are fully developed but still at an unripe state. The fruits are hand-picked and the hard, thin pericarp is peeled off. The white spongy pulp is then dried in ovens or in sunlight. The seeds comprise almost 75% of the weight of dried pulp. 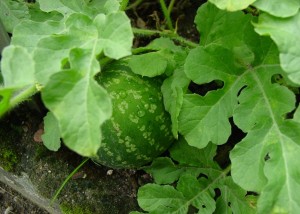 Bitter apple plants are generally harvested from the wild plants. The fruits are collected when they are fully developed but still at an unripe state. The fruits are hand-picked and the hard, thin pericarp is peeled off. The white spongy pulp is then dried in ovens or in sunlight. The seeds comprise almost 75% of the weight of dried pulp. Commercial bitter apples are available in two forms; either as pulp mostly free of seeds or as seed-filled pulps rolled into balls. Both of these forms are shipped in boxes.

The seeds of Colocynthis citrullus are used to extract oil. The oil derived from these seeds has the following nutritional benefits.

Here are some more important uses of bitter apple plants.

Here are some interesting facts about the Bitter Apple plants.

Bitter apple fruits and plant extracts should be consumed only under strict medical attention as an overdose can prove to be fatal. The fruits can cause extreme bowel pains and dangerous inflammations. The electuary confectio hamech made from bitter apples was known as a violent purgatory agent that could even cause internal bleeding. Bitter apples and extracts of these plants should not be administered to children, pregnant women or people having a weak constitution.

Here are some pictures of the bitter apple plants and fruits. 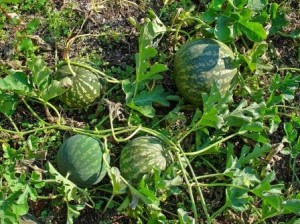 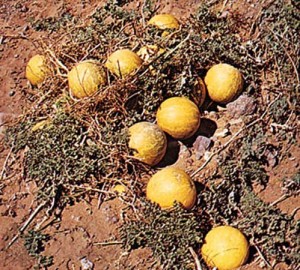 Bitter Apple is a low maintenance plant that is quite easy to grow. It also has a strong beneficial influence on human health when consumed in limited proportions.