8 Different Types of Kale for Salads, Soups, and More

Kale has long been a staple food not just at home but also on restaurant menus. Because of its versatility, taste, and abundance of vitamins and minerals, this leafy green is one of the most well-loved superfoods in the culinary world today. Even though some sources have lately started claiming that kale is not as popular (or as nutritious) as it is claimed, a hundred grams of fresh kale contains only 35 calories, which makes it a pretty good addition to many salads, soups, noodles, tacos, pesto, and smoothies. 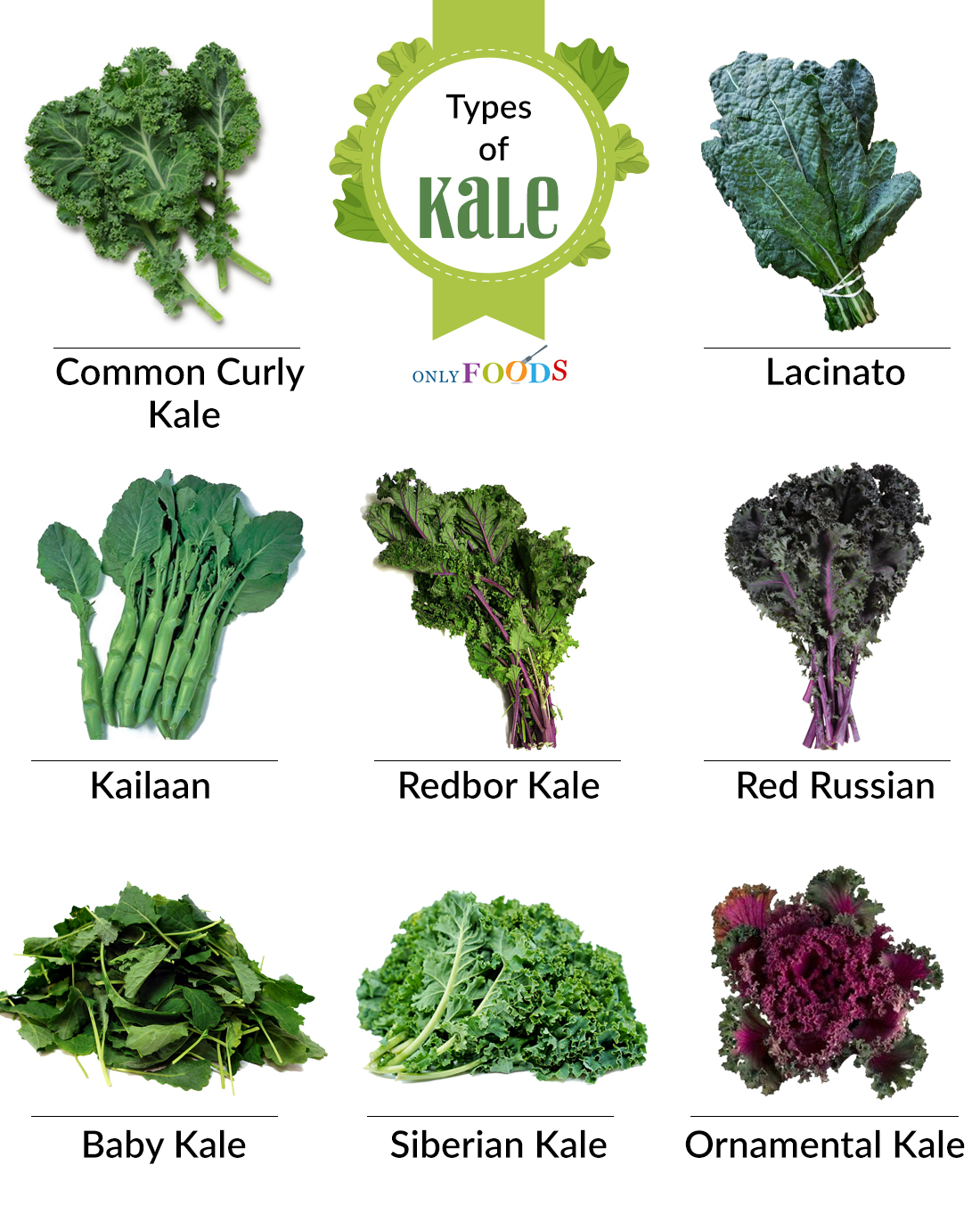 8 Different Types of Kale for Salads, Soups, and More

There are different varieties of kale, including both heirloom and hybrid types. Each of these varieties has a unique appearance and taste. Read on to find out more about these popular kale types and how you can eat them.

It is the most common kale variety that you will find in grocery stores. Curly kale, characterized by its light to dark green color, large, wrinkly, frilly-edged leaves, and long stem, is quite difficult to chop. It is known for its unique peppery flavor, but do not be surprised if you get a hint of tanginess in the mouth. Being highly nutritious, it contains plenty of vitamin B6, C, and K, as well as potassium. Because of its crunchy texture, this variety is commonly used for making crispy kale. It is also put in salads, tossed in bean soup, and blended in fruit smoothies.

This Italian variety, also called Tuscan kale, dinosaur kale, and cavolo nero, comes with long, slender, dark bluish-green leaves that do not have the characteristic curls and frills commonly found in kales. The leaves are chewier and thinner than other varieties, while their rich, earthy flavor, along with a nutty sweetness makes it suitable for eating raw in salads. Other than that, lacinato often features in minestrone and pesto. You may also add thin strips of lacinato to veggies and pair them with chili flakes, olive oil, and garlic.

First produced in China, the kailan is remarkably similar to regular broccoli in appearance. It is called by different names, including Chinese broccoli, Chinese kale, and gai lan. It has been commonly substituted for broccoli in various recipes, especially in Chinese cuisine. It features thick, glossy blue-green leaves that taste slightly stronger and bitter than regular broccoli. Given its strong flavor, kailaan is often used in sweetened sauces and stir-fried dishes.

The redbor kale, known for its stunning appearance, boasts curly reddish leaves with dark purple undertones. Because of its ornamental value, this variety is often used for garnishing and plate decoration. Its earthy-sweet taste combined with the crispiness makes it an excellent addition to soups and salads, but make sure to soften it before eating. It can also be sautéed with apple cider vinegar, garlic, pepper, olive oil, and salt to make a side dish.

The red Russian kale also called scarlet or red kale, was first produced in Siberia but has been popular in North America since the early 19th century. Its fringed leaves, ranging in color from bluish-green to purple-red, are similar to those of oak. It tastes slightly sweet but has a hint of peppery flavor. For this combination of flavors, the red kale is best eaten fresh in salads. You may also use it in smoothies and juices after cutting off the thick stems and softening the leaves.

It looks similar to curly kale except that its leaves are thinner and smaller than the latter. This leafy green is actually a powerhouse of nutrients, containing vitamin A, C, and K1, as well as iron and calcium. Because of their tenderness and mild flavor, baby kales are best eaten raw. You can also use them for a delicious green smoothie or sauté them with olive oil and your favorite seasonings.

It is more closely related to turnip varieties than other kale types and shows extreme hardiness to cold weather. The Siberian kale boasts of long, thin stems along with large, grayish-green, ruffled leaves that produce a mild taste. They are not suitable for eating fresh because of their extremely firm, rubbery texture. This variety tastes better when sautéed with onions, shallots, garlic, and olive oil.

As the name implies, this kale variety with frilly and fluffy leaves that range in color from pinkish-white to magenta or purple is often grown in gardens for its ornamental value. It has the appearance of an opened-up flower as if it is a rosette. Although the leaves are slightly coarse, you can eat them in salads or use them as a garnish. This colorful veggie is also used for displays on buffet tables.

Ans. Kale, also called leaf cabbage, is a leafy green veggie that belongs to the mustard family (Brassicaceae). Some of the other members of this family are broccoli, cauliflower, cabbage, Brussels sprouts, and collard greens. So, kale and cabbage are two different leafy greens belonging to the same family.

Q.2. Which are the healthiest types of kale?

Ans. Red kale is considered the healthiest and easiest to digest among all the varieties.

Q.3. Which varieties are best for making juices and smoothies?

Q.4. Are all types of kale good for eating raw in salads?

Ans. No. The kale varieties that are best eaten raw in salads include lacinato, redbor, and red Russian.