13 Types of Pumpkin to Know About

In North America, it is hard to imagine the fall season without the flavors and decorations of pumpkin, which is why this fruit is particularly popular around the Pumpkin Day, Halloween, and Thanksgiving. While there are many uses, canned and otherwise processed pumpkins are specifically popular in the US whereas fresh pumpkins are also used for many beloved recipes like pumpkin pies. These are definitely one of the most prominent winter squashes. 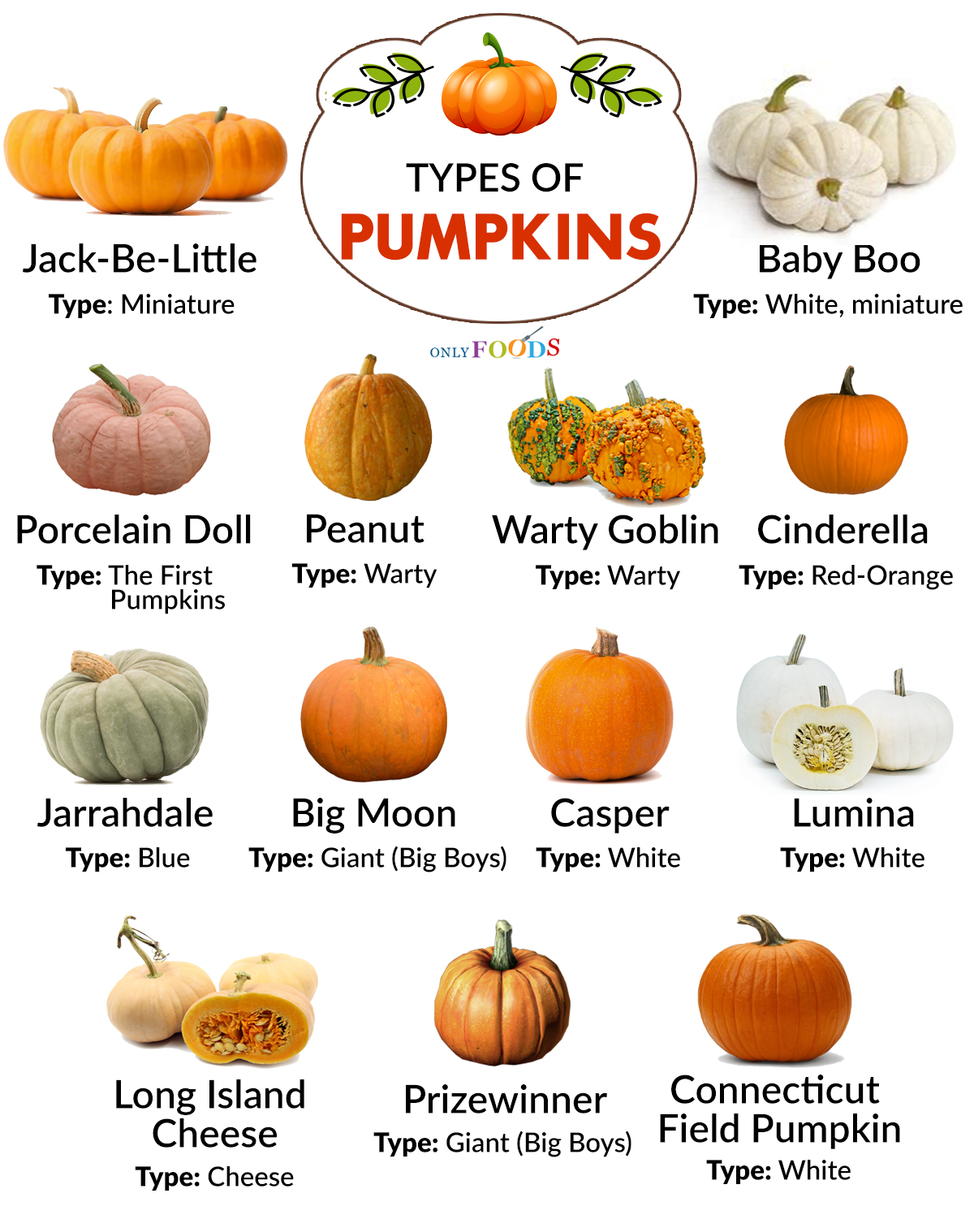 13 Types of Pumpkin to Know About

As a matter of fact, pumpkin is a round, nutritious cultivated variety of winter squash that has smooth, ribbed skin and usually orange or dark yellow coloration. However, not all winter squash types (Cucurbita pepo, Cucurbita moschata, Cucurbita maxima, and Cucurbita argyrosperma) are pumpkins. Both the pumpkin and squash are actually members of the Cucurbitaceae family.

Although all the edible pumpkins are often classified based on their skin color, these are not any official classification. You will find these following types of pumpkins in the market.

Can You Eat All Types of Pumpkins

Ornamental pumpkins grown specifically for decorative use, such as Baby Boo, Kakai, and Jack Be Quick, are not as flavorful as those grown for culinary uses. Therefore, they are usually not cooked and eaten.

It is a dark-yellow- or orange-colored heirloom pumpkin variety that grows about 2 inches high and 3 inches wide. This adorable, palm-sized mini, suitable for table setting decorations, is also edible having a dense, sweet flesh. It can be used as decorative fall displays and edible soup bowls.

This bright white, palm-sized mini is famous for its long, distinct handles. It comes with a deeply ribbed skin that changes to yellow when exposed to direct sunlight. Baby Boos are commonly used for decorations during Halloween and Christmas, as well as table arrangements in Weddings.

Characterized by a deeply ribbed, pink skin and squarish shape, the Porcelain Doll comes with a deep orange, sweet flesh ideal for cooked applications like baking, sautéing, roasting, and boiling. It can be pureed for pies, muffins, tarts, and cheesecakes, or roasted for making casseroles, stews, and soups.

It is a medium-sized pumpkin first grown in the 19th century. This pumpkin variety derives its name from its cheese-like color and appearance. Its lightly ribbed skin and deep orange flesh has a sweet taste. Averaging 10 pounds, some of its well-known varieties are ‘Shakertown Field’ and ‘Long Island Cheese’ pumpkins.

This oval-shaped hybrid pumpkin has lumpy warts all over its shiny orange skin, giving it a spooky appearance. Because of its hard-shell rind, the Warty Goblin is difficult to cut. Despite having unsightly bumps, it can still be eaten.

It is a classic heirloom variety that was extremely famous in Parisian markets during the 1880s. Its deeply ribbed, reddish-orange skin and flattened shape capture the attention of onlookers, making it suitable for decorative purposes. Moreover, this pumpkin’s semi-sweet, moist taste makes it ideal for pies and French soups.

The Jarrahdale, an Australian heirloom variety, was first produced from Blue Hubbard and Cinderella. It is characterized by deeply ribbed, light blue-gray skin with golden yellow flesh and is one of the prettiest pumpkins for display. Its mildly sweet flavor, as well as creamy and dense texture makes it a great addition to pies.

It is a fast-growing, bright orange, giant pumpkin that has moderately rough rind and can weigh more than 200 pounds. While it serves as an excellent decorating object in your garden, its tender flesh makes it suitable for baking.

It is an ornamental pumpkin with bright white skin and slight ribbing, having a diameter of around 9-12 inches and weighing about 10-16 pounds. Its handle is tan and has a corky texture, while its thick orange flesh offers excellent eating quality. It is specifically good for baking and making pies.

This pale white colored pumpkin comes with a tender texture and a mild, earthy flavor, making it suitable for baking. It measures about 8-10 inches in diameter and weighs roughly 10-12 pounds. It is an ideal pumpkin variety for carving and painting.

An heirloom pumpkin variety noted for its unique peanut-like warts that grow on its salmon pink skin. Favored for its delicious taste reminiscent of apples and sweet potatoes, the Peanut pumpkin is an excellent choice for soups.

This is one of the largest among ornamental hybrid pumpkins, with some weighing more than 300 pounds. Its consistent round shape, bright reddish-orange color, and shallow ribbed skin make it a fit for display in exhibitions, fairs, and harvest festivals.

One of the oldest varieties of pumpkins in existence, the Connecticut Field pumpkin is an heirloom type commonly used for decorations, especially as jack-o’-lanterns. It is a large, round pumpkin with smooth, orange skin that is slightly ribbed. Although it can be used in cooked applications, it is not preferable.

Some More Pumpkin Varieties to Know

Q.1. Which types are best for making pumpkin pie?

Ans. Some of the pumpkin types that are ideal for making pies include Baby Bear, Galeux d’Eysines, Cinderella, Casper, and Jarrahdale.

Q.2. What types of pumpkins are most suitable for making soup?

Q.3. Which type of pumpkin is used during Halloween for carving a Jack O’ Lantern?