Even if you do not necessarily love these small-sized fruits, you have to admit that olives are one of the most versatile stone fruits that exist. With their taste ranging from sweet and salty, to sour and bitter, they are suitable for a wide range of culinary applications. They can be ground into tapenades, included in sauces, stews, stuffing, and salads, eaten fresh, or used in martinis. 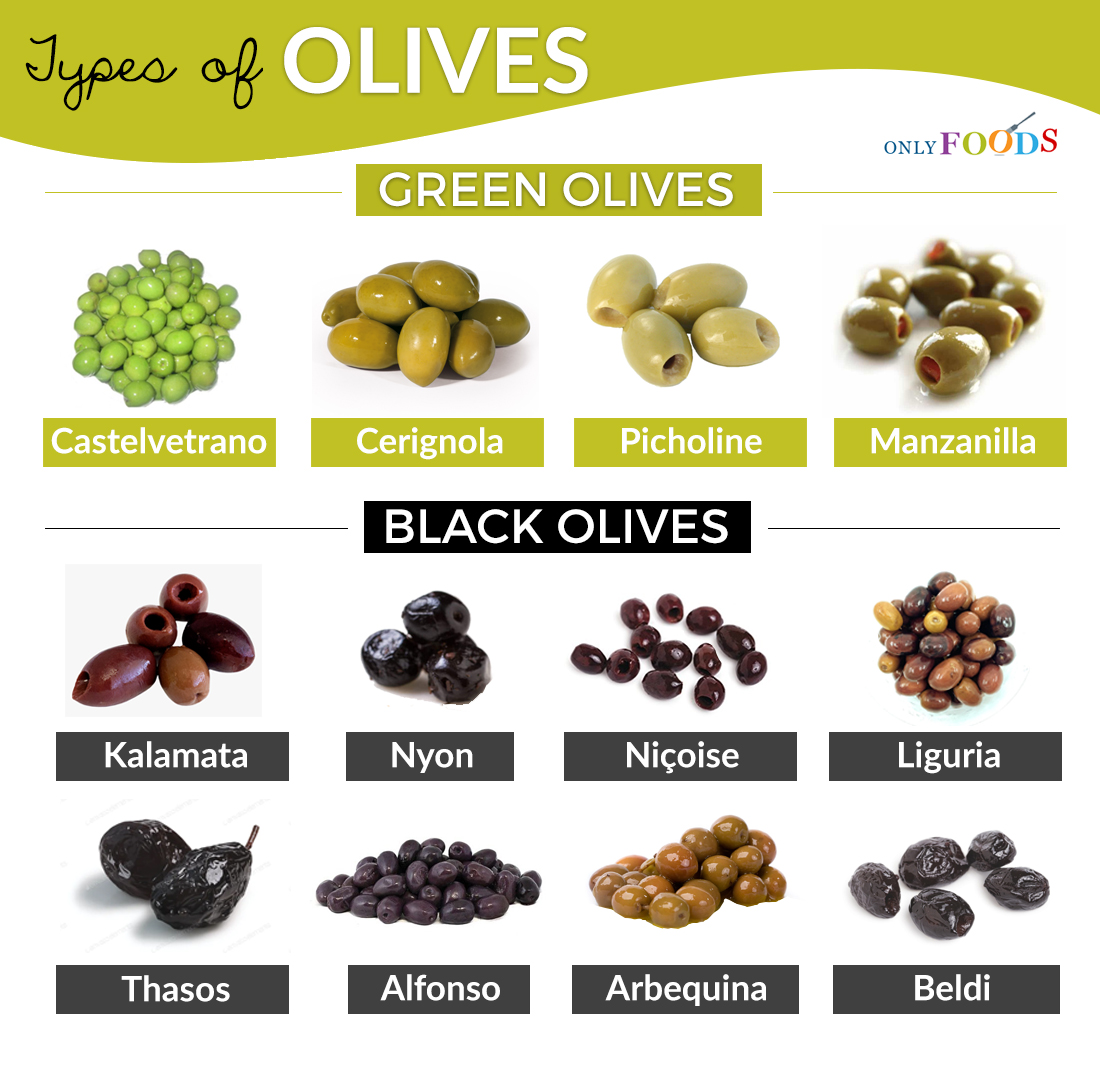 What are the Most Common Varieties of Olive

The most common varieties of olives found in supermarkets and specialty stores are generally classified based on their degree of ripeness into green olives or Spanish olives and black olives.

These are collected unripe from trees early during the harvest season (September-October) and have a bitter taste, for which they are typically cured in water, oil, lye, or brine. Here are a few popular varieties:

It is one of the most widespread Italian olive varieties distinguished by its bright green hue, crunchy, meaty texture, and mildly salty, sweet flavor. This variety, commonly used as a snack olive, is produced in the Valle del Belice, a river valley in the south-west of Sicily.

Used for: Serving with wine, pairing with fresh Italian cheese

This is a plump, large-sized variety typically served green but maybe cured black or red (green is firmer than black or red). Known for its mild flavor and crispy, buttery texture, cerignola is named after the town of Cerignola in Apulia province, Italy.

Used for: Serving with martini and Bardolino wine; used on cheeseboard with Parmesan, crusty bread, and salami; stuffing with cheese, anchovies, capers, and garlic

It is a small- to medium-sized, torpedo-shaped green olive that originated in Gard, a region in southern France. It has gained popularity for its tart and nutty flavor, as well as its crispy, crunchy texture and is now grown throughout the world.

The manzanilla is a medium- to large-sized, oval-shaped green olive grown in Spain. It is usually cured in brine and has a crispy texture along with a mild smoky, almond-like flavor. Although it is mostly available as pitted varieties, it can also be stuffed with pimientos.

These are actually processed with oxygen and sold as a ‘fully ripe’ variety in cans. Tree-ripened black olives are plucked later in the harvest season (between November and January), after their color changes from green to dark purple, and they have a soft, meaty texture with a rich flavor. Following are some popular varieties commonly available as canned olives:

Known for its large size and dark purple, shiny skin, it is named after the Greek city of Kalamata, where they were initially grown. It is an almond-shaped table olive (one that is grown for consumption), which has a meaty flesh with unique smoky, fruity flavor.

Used for: Incorporating in tapenades, serving with roasted cauliflower

It is a small, jet-black olive grown in southern France. The fruit is dry-cured and then preserved in brine. Its meaty flesh has a distinctive mild bitter taste, along with a sweet aroma.

Used for: Dressing with rosemary, thyme, and Provencal olive oil

The Niçoise is a small-sized black olive grown in the Alpes-Maritimes department in France and the Italian Riviera. The fruit has an enticingly rich flavor with the fresh aroma of licorice. While it is commonly sold as a brine-cured variety, it is also pitted and minced for use in Provencal dishes.

It is quite similar to the Niçoise in appearance, having a purple skin, and firm texture with a sweet, nutty flavor. It is typically treated with a mixture of thyme, rosemary, and bay leaves to enhance its aroma. The fruit is grown in the Liguria region in northwest Italy.

Used for: Consumption as appetizers with cheese, adding to pasta, salads; extraction of oil

This is a natural black olive named after the Greek island of Thasos, where the fruit is grown. It is a wrinkly skinned, sun-dried, salt-cured variety known for its mild woody, salty flavor. Its popularity is now rapidly growing outside of Greece.

The Alfonso is a large-sized fruit with dark purple skin, soft, juicy flesh, and a hint of sour and bitter flavor. It has been traditionally considered a Chilean variety and is grown in the Tacna region (now in Peru). It is cured with brine and then soaked in red wine to enhance its softness and tanginess.

Used for: Seasoning soups and stews, supplementing with cooked meat and red wine

It is a small, symmetrical variety mostly cultivated in Catalonia, Spain. It comes with a pinkish- to dark-brown skin and slightly bitter fruity flavor. The fruit has a firm, meaty flesh and is cured with brine. The Arbequina has now become popular throughout the world and is also grown in America, Australia, Chile, and Argentina.

It is a sun-dried, salt-cured variety of olives grown in Morocco. The beldi comes with dark purple skin, raisin-like wrinkly flesh, and rich salty-bitter taste. It is quite popular with the Moroccans and forms an integral part of the local cuisine.

Used for: Incorporating in tagines and salads, garnishing with hot peppers, and olive oil

Q.1. What types of olives are commonly used for making Greek salad?

Ans. The kalamata olive is the most preferred variety for Greek salads.

Q.2. Which olive varieties are used for a martini?

Ans. Spanish manzanilla or queen olives, because of their firm, meaty texture and bold taste, are best suited for martinis.