12 Types of Cabbage and Their Uses

Cabbage, a leafy green, has a long history first cultivated in Europe several hundred years ago. From being used in soups and curries, it has presently become a preferred health food due to its high nutrient value, used in every possible dish from salads to coleslaw, sandwiches to kimchi. A cup of cooked cabbage contains no more than 33 calories. So, those intending to cut down on meaty foods often use cabbage to make steaks and rolls. 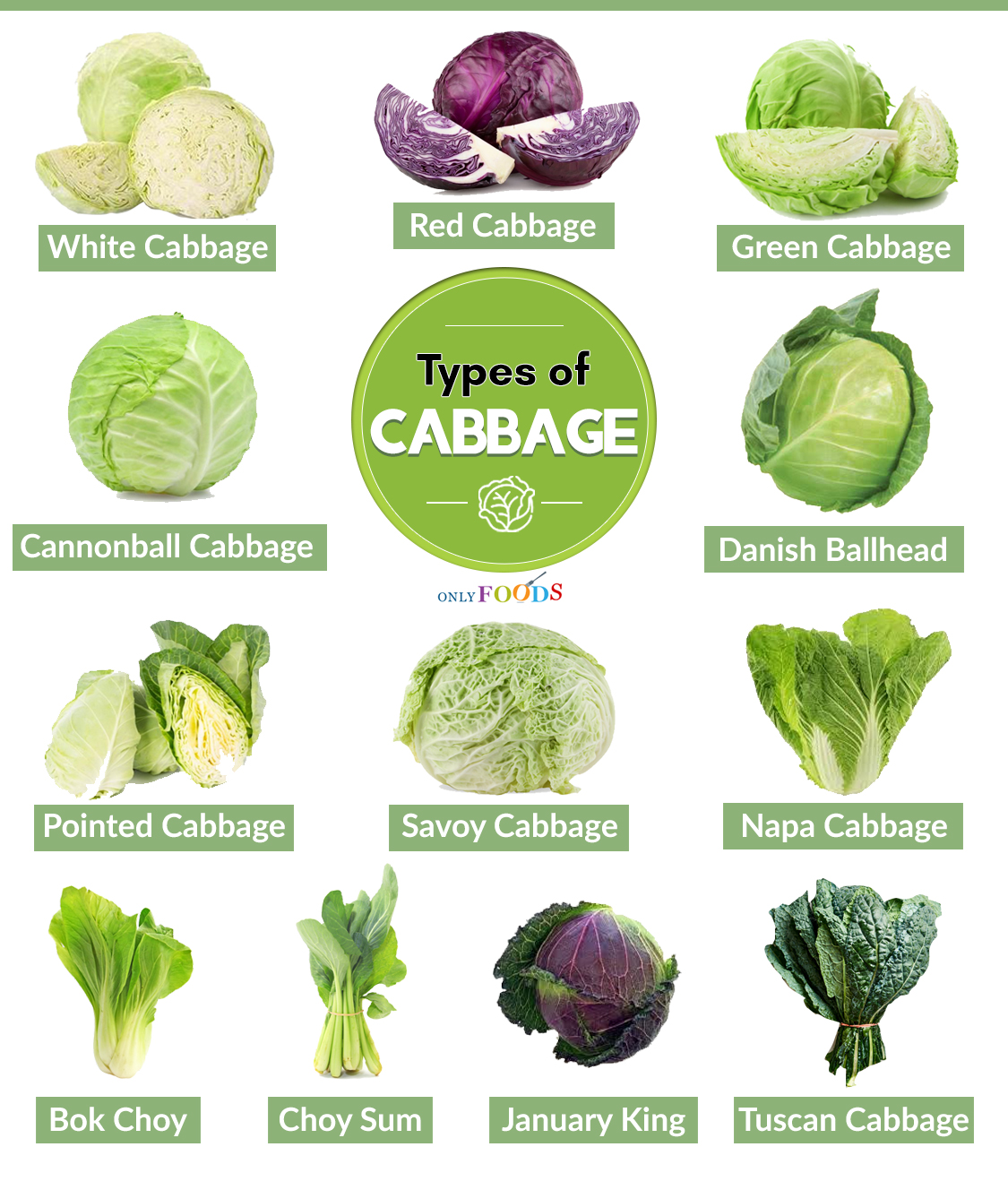 12 Types of Cabbage and Their Uses

Originating from wild cabbage, it has a host of cultivar groups, like the red, green, white, and Savoy cabbages, and each vary from the other in head size, the texture of leaves, color, and taste. This is how it is closely related to cauliflower, broccoli, kohlrabi, Brussels sprouts, and collard greens, which also are a part of the wild cabbage species.

They are round, with a firm, tightly-packed head, and smooth pale green leaves. Patches of white appear in the area near its veins. The inner leaves are lighter than the outer ones since they do not receive a lot of sunlight. Sweet, mild, and crunchy, one can eat it raw or cooked. This is the most preferred cabbage variety for coleslaws, while it can even be boiled or steamed to make soups and stews.

As the name suggests, it has dark reddish-purple leaves with a round, compact but moderately small head. Besides eaten raw in coleslaws and other salad preparations because of their mild taste and colorful appearance, they can also be stir-fried and pickled. Red cabbage mostly serves as accompaniments to several German meat dishes like Sauerbraten and Doner. They often turn blue while cooking, and adding vinegar or lemon juice would help bring back the red color.

The commonest of all cabbage varieties resembling a ball, it has a tightly-wrapped, firm head, and fan-shaped, thick, pale green leaves. When raw, the leaves have a rubbery texture with a peppery flavor. Cooking them for a long time brings out their sweetness. Green cabbage’s versatile taste and texture make it perfect for many dishes like salads, stir-fries, rolls, casseroles, and soups.

This green cabbage variety gets its name because its round, hard head closely resembles a cannonball. Small in size, it has a neat appearance, with the leaves tightly wound into one another compactly. The leaves’ dense texture makes the cabbage apt for being shredded into coleslaws or fermented to prepare sauerkraut. They get tender and tastier when boiled or cooked, thus made into stews, soups, and curries.

One of the most familiar green cabbage varieties, it is considered a strain of the old Danish Amager cabbage, which originated as early as the 15th century. It has a large, round, firm head weighing about 5lbs, alongside bluish-green leathery leaves. They mature during early fall and remain good throughout winters. Firm in texture with a sweet, soft, and crispy flavor, they are prepared into sauerkraut, included as a part of coleslaws, or boiled to make soups.

Pointed cabbage, alternately known as sugarloaf, is a small green cabbage with a conically-shaped, pointed head and widespread leaves. Sweet, soft, and crispy, with a firm texture, pointed cabbage is perfect for making coleslaws.  One can even stir-fry, bake, boil, steam, sauté, or pickle it. They remain good for a week in a refrigerator, and their tightly-packed head makes the storing process easier.

The prettiest among the lot, it attained its name from France’s Savoy region, where it originated. Its round head is not as compact as the green or red varieties, with the ruffled, lacy, leaves layered loosely. This cabbage type is earthy, delicate and crunchy, retaining its firmness when cooked. The waffle-like elastic texture of the leaves, make it ideal for stuffing and rolls. It is also eaten in salads, stir-fries, wraps, soups, and stews. Savoy cabbage would do well for a week when refrigerated.

A Chinese cabbage variety, originating in China’s Beijing, it stands out from the regular cabbage in appearance, closely resembling Roman lettuce. Its characteristic features include a yellowish-green body, oblong head, tightly-packed frilly leaves, and thick, white stems. One could wrap it tightly in a plastic bag and store it in the refrigerator for about a week.  Because of its mild, peppery flavor, it is a perfect pick for salads, stir-fries, and as a filling in dumplings.

This is another kind of Chinese cabbage, strikingly similar to the Swiss chard. It forms no head but has a bulbous round bottom, with green leaves separated from each other right at the base, alongside a thick, white stalk. The overall flavor is mild, grassy, fresh, and a little peppery, though the soft, crispy leaves could taste slightly bitter. Its stalks, however, are crunchy and juicy, chopped to prepare salads, or even eaten raw along with a dip. They also seem apt for pickles and stir-fries. Baby bok choy is similar to bok choy though smaller and sweeter than the latter.

Choy sum or choi sum, also known as Chinese flowering cabbage, does not form a firm head like other cabbage types. They have fragile leaves, long, thin stalks, and small yellow, round or oval-shaped flowers. This leafy green is mostly sweet, having a tinge of bitterness, with the whole vegetable being edible. The stalks are soft, crunchy, and juicy, while the flowers are peppery, almost replicating the taste of mustard. They do well when steamed or added to stir-fries.

As its name suggests, this is a winter cabbage, cultivated since 1867 in England. It has a small, flattened head, weighing between 3 and 5 pounds. Its bluish-green leaves with tinges of red or purple make it all the more appealing. Sweet and crunchy, it finds its way into coleslaws, soups, casseroles, and rolls.

Originating in Italy, this type is more of kale and less of a cabbage. It has mottled green, spear-shaped leaves with a pebbled pattern and thick stalks. It is sweet and nutty, with an earthy, delicate flavor, and slight touches of bitterness. They are sautéed and even prepared into soups, stews, and sauces. When packed in a Ziploc bag and stored in a refrigerator, the leaves last for approximately three days.

Q. 1. Which are the healthiest types of cabbage?

Ans. Red cabbage is the healthiest type of cabbage, loaded with antioxidants due to its high Vitamin C content (57 mg in 100 grams raw cabbage).  It is even rich in fiber and known to possess cholesterol-reducing properties.

Q. 2. Which cabbage varieties are commonly used for making sauerkraut?

Ans.  Tight, round headed cabbages with a soft texture like cannonball cabbage, and Danish ballhhead cabbage are commonly used for making sauerkraut.

Q. 3. Which cabbages are most suitable for cabbage rolls?

Q. 4. Are there any specific varieties more commonly used for coleslaw?