‘Fiddlehead’ is the young coiled fern frond with a distinguished look resembling a violin scroll. They are also known as ‘fiddlehead greens’ due to their bright green color. The unique shape of fiddleheads compliments the beauty of the plant. 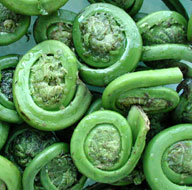 Fiddlehead greens are known to be rich in iron and fibre despite of having antioxidant properties as well.

These plants are found in the northern regions of the world especially the eastern coast of United States and Canada.

Local names of the Fiddlehead Fern

Indonesians prepare a popular fiddlehead dish known as ‘gulai paku’. The fiddleheads belonging to the type known as bracken, is much preferred in East Asia and Japan. In these regions they call it ‘warabi’. It is also known as ‘juecai’ in China, Korea and Taiwan.

Fiddleheads are extremely popular in the northern regions of the Indian subcontinent. The green coiled fronds are termed ‘lingri’ in the state of Himachal Pradesh. The people of Darjeeling and Sikkim refer to it as ‘ ningro’.

Fiddlehead greens are composed of water, carbohydrates, fiber, protein, ash and fats. Water is present in maximum percentage like in all vegetables. The nutrient composition is summarized in the table below

Apart from this, fiddleheads are known to contain seventeen (17) minerals. Potassium and calcium are the most dominant minerals found in fiddleheads.

Fiddleheads are rich in Vitamins A and C that are extremely important and good for health. Apart from this, these plants also contain minerals like magnesium, iron, potassium, phosphorus, niacin and zinc. Omega-3 and omega-6 fatty acids are also present in it.

History and Origin of Fiddlehead Ferns

Centuries ago it was the French settlers who first recognized the fiddlehead vegetable as a rare delicacy. It is said that they acquired the idea from the American Indians. Canada is one such country that shares a long and similar history of harvesting fiddleheads. In fact Canadians were so attached to the plant that they even had fiddlehead themes for their lodges and boats.

Ever since the middle ages fiddlehead ferns were recognized as a conventional diet in countries like Asia, New Zealand, Australia and Native America.

What is a Fiddlehead Fern? 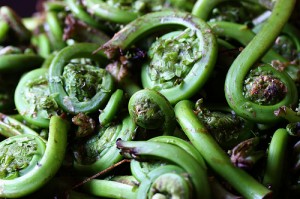 Fiddleheads are seasonal plants. The springy fiddlehead greens thrive in the months of April and May.

Moisture is extremely essential for fiddlehead ferns. As such these plants grow best in areas that are moist and shaded. In fact the cold winter period play a significant role in the growth cycle of fiddlehead ferns. You could actually have a fiddlehead garden in your home provided the region is accustomed to cold winters and mild summers.

Planting fiddleheads next to small water bodies like ponds etc can help retain the much required moisture level required for its growth.

Rich organic soil is considered best for the growth of fiddlehead ferns.

Plant the fiddleheads 2 to 3 feet apart from each other. The distance allows the plant to grow freely as it is bound to spread almost 3 feet wide.

Apart from culinary purposes fiddlehead ferns can be used to adorn your home gardens.

Fiddlehead ferns are considered exclusive for their curiously interesting shapes and patterns. Owing to their ornamental value these plants are sold at an expensive rate especially at the temperate regions.

In fact fiddlehead bouquets are getting more and more popular as a symbol of contemporary personal expression.

The fiddlehead designs and patterns have been inspired by these coiled ferns. You can spot such designs in fiddlehead mittens, show pieces etc.

Fiddleheads are seasonal vegetables found in the early spring months of April and May. When it comes to edible fiddlehead ferns, the Ostrich fiddlehead fern is your best choice.

Fiddleheads are harvested as a vegetable and devoured by people all over the world. They have to be harvested at an early stage before the fronds unfurl. The delicate flavor of these coiled crosiers is best retained at this stage.

There are certain points to be kept in mind while picking the delicate fiddleheads.

Where to Buy fiddleheads?

The fresh taste of the fiddlehead ferns is something that would delight any kind of palate. You can buy fiddleheads from many regional supermarkets, groceries and restaurants. The fine seasonal fiddlehead ferns are hand grown and harvested by people of the rural areas.

How to Cook Fiddlehead Ferns

Cooking fiddlehead ferns is simple and quite interesting. These plants can also be pickled or eaten raw in salads.

It is necessary to clean the fiddleheads with water before consuming them. Make sure to remove any brown, papery specks that cling to the stalk.

The green fiddleheads taste best at a semi – mature stage when they are between 8 to 16 inches tall. Fully grown fiddleheads are fibrous and hard to chew.

You have to bring the fiddleheads to boil with a dash of butter, until the curly vegetable is soft and tender.

You can also leave the fiddleheads parboiled in a small amount of salted water. This can be followed by sautéing them in butter or oil with a hint of garlic. Try out lip slurping stir – fry dishes that can be prepared in a similar way from fiddleheads.

The fresh and nutty flavor of curly green fiddleheads will remind you of sweet and mild asparagus. The array of savory dishes, soups and pickles that can be prepared from fiddlehead ferns will surprise food lovers.

Side Effects of Fiddleheads

You must always wash fiddlehead ferns as there are ample chances of it being home to germs and microbes.

The presence of enzyme thiaminase in fiddleheads can cause berberi and vitamin B complex deficiency. Therefore it is advisable to consume these plants in small quantities.