Whether it is baked, brewed, or eaten fresh, beans are one of the healthiest foods, popularly used in cuisines across the globe. There are almost 400 different types of edible beans out there, each of them is packed with essential nutrients. Not only does the flavor of beans add taste to a wide range of dishes, they are all rich in vitamin B, fiber, and protein too. 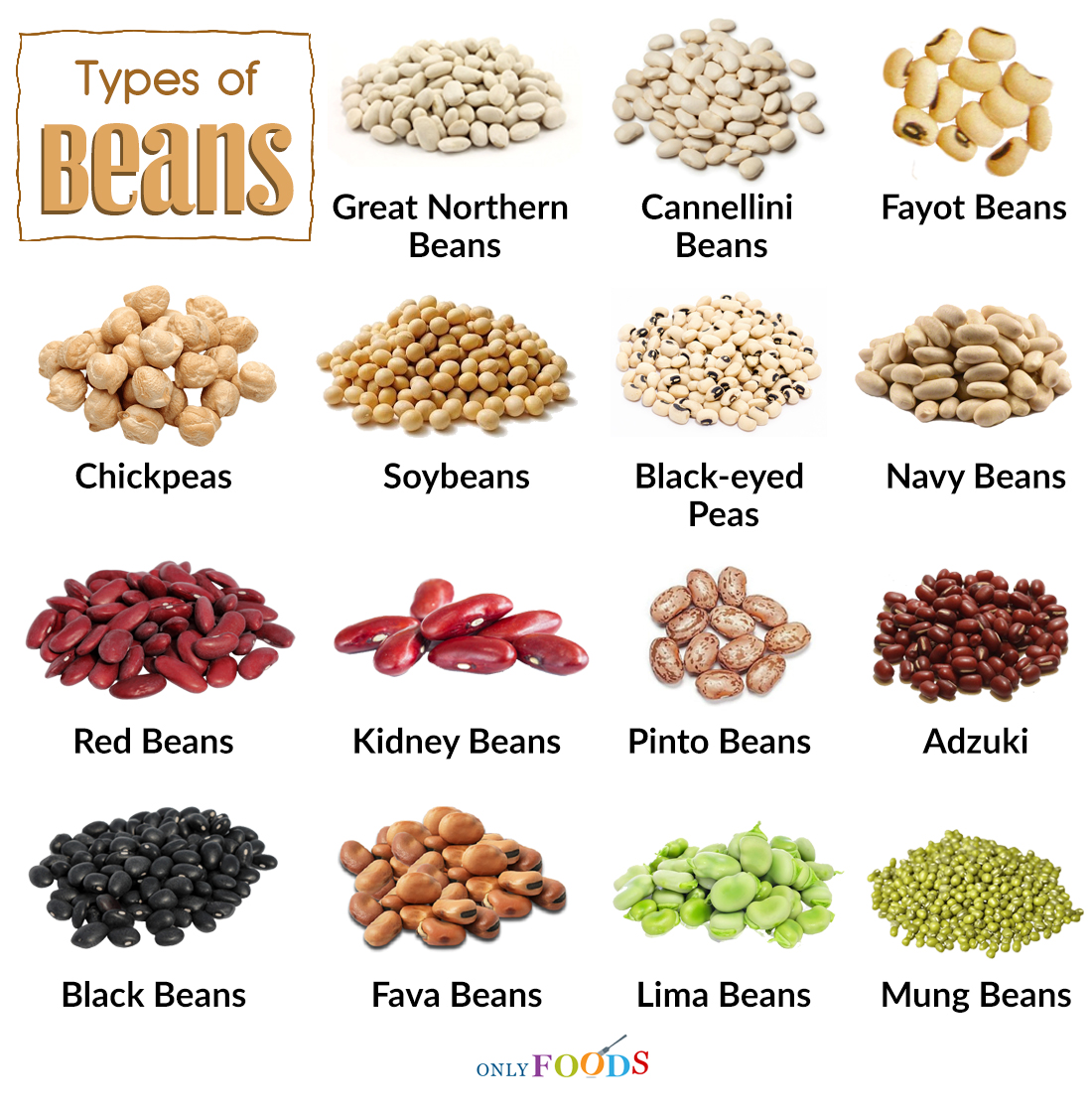 There is a common misconception that beans are available in two forms, dried, and canned. However, canned beans are also dried beans, with the only difference being that they have been cooked and preserved in cans instead of being sold in their dehydrated form. Apart from the dried varieties, some are available as fresh beans as well. These include snap beans or green beans that have tender pods, and shell beans that are eaten when their seeds are young, sweet, and starchy.

A List of the Most Popular Varieties of Dried Beans

These are a medium-sized white bean variety that looks similar to navy or cannellini beans. They are, however, less dense and nuttier in flavor than the latter two. Because of their mild flavor, light texture, and ability to retain shape, they are typically stewed and ideally used in stews, soups, or purees. They also absorb seasonings readily and can be used with other ingredients to enhance the taste of a dish. These beans are used for making vegan quesadillas, Italian sausage soup, and creamy white chili.

Also called the Italian kidney beans or white kidney beans, the cannellini is the largest and a meatier variety of white beans with a mild, nutty flavor. They are immensely popular in Italy, especially in Tuscany region, where they are commonly used in salads or added to soups and other dishes. Since these beans hold the shape well, they can be mashed or fried lightly to make pancakes.

These are small-sized, kidney-shaped, ivory white to pale green beans that have a creamy texture and mild flavor. Believed to have originated in France, the flageolets are extensively used in French cuisine for making flavorful side dishes, as well as soups and salads. They have been traditionally served with roasted lamb.

These are versatile nutty-flavored beans that come in two different varieties, the smaller Indian type and the larger Kabuli or the Mediterranean type. Their round shape and firm texture make them well suited for a salad topping. While the garbanzo beans are commonly used for making hummus, they are also roasted with spices to make a delightful snack.

Originating in Asia, soybeans have been cultivated for hundreds of years. These beans are known for their rich protein content and make great dairy and meat substitutes. While they are used for making tofu, paste, flour, and milk, these beans can be eaten solo or mixed into pasta and salads. Soybeans are added to quinoa for texture and included in multigrain muffins as well as stir-fried tofu.

They are denser than some of the other beans and possess an earthy flavor. The beige-colored beans get their name from the distinct black spot on their skin. Black-eyed peas have a texture similar to white beans and chickpeas, which is firm yet soft. They contain high amounts of folate, a nutrient beneficial for expecting women. While these beans complement salty foods like bacon and ham, they work well with chicken broth and spicy salsa.

These hearty and meaty white beans, commonly called white pea bean, Boston bean, and haricot, are smaller than their Great Northern cousins. Because of their mild taste and creamy texture, the navy beans are typically used in making Boston-style baked beans and traditional English breakfasts. They are often seasoned with garlic, bay leaves, and fresh herbs, and make a great addition to a wide range of salads and pasta dishes.

These are small, oval-shaped beans that can be identified by their ruby-red skin. Red beans have a mix of mild earthy and sweet, nutty flavors. Known for their soft texture, these are served with soups, stews, and chilis. Traditionally used in Latin, Cajun, Caribbean, and Creole cuisines, they are commonly cooked with rice, vegetables, spices, and pork bones to make red beans and rice.

These large-sized beans, named from their kidney-like shape, have vibrant red skins with white interiors. Because of their mild flavor, they are commonly added to chili dishes. You can also add them to tacos, curries, rice, or mash them for a creamy dip. Kidney beans, being packed with omega-threes, iron, protein, and antioxidants, are suitable for your heart health.

These beans have brown to orange-pink skin with rust-colored specks. They are quite versatile, especially popular in the Americas. Characterized by a smooth, creamy texture and earthy, nutty taste, the pinto beans are commonly used in dips, stews, and chili dishes. Some popular recipes that include pinto beans are tortilla stew, Texas caviar, and skillet nacho dips.

They are small, round-shaped beans with a starchy interior and sweet flavor. While they are used in baking pastries and cakes, they also make a great addition to veggies like sweet potatoes, mushrooms, and leafy greens, as well as rice. In East Asia, they are sweetened and used in desserts like ice cream. These beans are often used in making veg kofta kabobs and sautéed kale with adzuki beans.

These beans are similar to pinto beans in texture and flavor. Instead of using pintos, you can include them in dishes if you wish to lower the carbohydrate intake. Known for their mild taste and velvety-smooth texture, they are considered a staple in Brazilian and Mexican dishes. They are commonly used in soups, tacos, casseroles, and salads.

Also called broad beans, the fava beans need to be prepared for use before you can cook them. You need to take them out from the pods and dip them in boiling water to get their skins off. They are, however, favored for their sweet, nutty flavor and creamy, buttery texture. These beans are best enjoyed as a topping for salads, and commonly used in dips, spreads, and charred with asparagus.

These beans can have creamy or green skin and are available in two varieties – the baby lima beans that taste sweet and the larger, buttery Fordhook beans. They have a soft texture, along with a mild flavor. If cooked for a long time, the beans turn into a smooth, semi-solid substance. They can be added to stews or can be enjoyed as a standalone dish.

The mung beans are one of the most commonly consumed green beans in the world. They are identified by their small size, round shape, and green skin that comes with a white stripe. Because of their mild flavor along with starchy texture, they are a great addition to soups and stews. These beans are available in different forms, including bean noodles, sprouted seeds, split beans, dried powder, and whole uncooked beans. For a healthy snack, you can mash these beans to make fritters.

Q.1. What are the healthiest types of beans?

Ans. Some of the healthiest types of beans that you can eat are chickpeas, kidney beans, soybeans, black beans, and pinto beans.

Q.2. Are refried beans made from any specific type of beans?

Ans. In the US, refried beans are typically produced from pinto beans. After boiling and mashing them into a paste, they are baked or fried.

Q.3. What type of beans are used in baked beans?