otein rich legumes that belong to the family of the pea plant. These beans are packed with essential nutrient, fiber and amino acids. In today’s world where no one is willing to make a compromise when it comes to health, soy food has become a healthy choice around the world.

Different varieties of soybeans are found in various sizes and colors. The colors of the seed coat can range from brown, black, green, yellow, blue and mottled.

Soybeans are treated more like an oilseed than a pulse. Majority of soybeans are used for oil and food production. 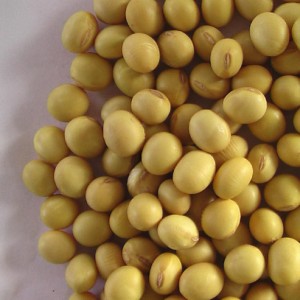 The scientific term associated with soybeans is Glycine Max.

Enumerated below are the different types of soya beans.

This particular variety called ‘Edamame’ available throughout the year is identified by their green color and sweet taste. These soybeans are harvested at a premature state and are comparatively larger in size. Edamame is popular in the Asian markets and is mostly served with salads, soups and rice dishes. 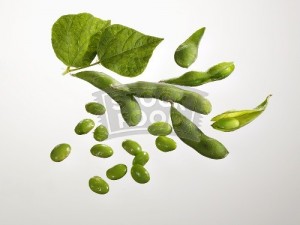 This type of soybeans is identified by their light brown color. Mature soybeans are also available throughout the year. As the name implies these beans are fully ripe and is sold either with or without the pod. Asian markets are flooded with these beans. Devoured for their distinguished flavor, matured soybeans are usually served as a side dish with rice or soups.

This variety of soya beans is smaller in size and is more or less pea-sized. Majority of health food shops and super markets sell these soybeans. They are known to have a mild flavor and can be mixed with other dishes and served. Please note that dry soybeans have to be soaked overnight before cooking. 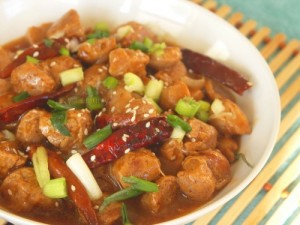 The nutritive composition of soya beans makes it a popular health food. Soy bean is not only loaded with proteins but is also an excellent source of fibre. It also contains essential minerals like calcium, sodium, magnesium etc.

The nutritional composition of soya bean per 100 g has been enlisted below.

More than 40% of the calories in soybeans come from the proteins in it , making soybeans the most nutritious amidst other legumes. 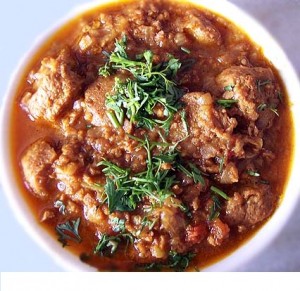 The primary usage of soya bean is in soya food products and soya bean oil, catering to the fact that soya bean is comprised of almost 38% protein and 18% oil. Soya bean is also an essential element present cattle and livestock feed that is used throughout the world. A number of non – food industries use soya beans in upholstery applications, lubricants, bio-diesel etc.

Let us take a closer look at the various uses of soya beans.

Raw soya beans are highly sought after by soy processors who use it to extract the oil out of it. Soya oil is used in a widespread scale as edible cooking oil and partly also for biodiesel production and other industrial purposes.

Usage of soya bean oil as a regular cooking oil has always been recognized. This oil is also used in the preparation of margarine, mayonnaise, soy ice cream, soy cheese etc.

The protein loaded fibre that is left behind after the procedure of oil extraction from soy beans, is used as a healthy animal feed for different kinds of farm animals. Bulk of the soybean meal is fed to swine and poultry industries.

There is a significant amount of soy protein in fish food as well.

Wood adhesives made with soy are used to make laminated plywood, finger-jointed lumber and particle board. Non- food industries use a number of soy products in automobile upholstery applications as well.

The discovery of soy bio-diesel is not only a great invention but is also blessing in disguise for our environment. Diesel engines run on bio diesel fuel that is prepared using soybean oil. The removal of glycerine from soy oil results in the residue or the soy biodiesel. Non–toxic and renewable, soy biodiesel is way better compared to petroleum diesel oil.

The environment friendly solvent, capable of cleansing shorelines and streams from oil or other impurities is also made from soy oil. This solvent is absolutely safe for humans and animals as well. As such soy has always been used as an important ingredient in cleaners, solvents and paints of all kinds.

There are soy crayons and candles for us to use. The soy content in the crayons unlike petroleum is invariably non – toxic and thereby extremely safe for kids who use crayons. It has also been observed that candles with soy content not only last longer but also emit less soot and smoke.

Similarly, even soy ink and soy lubricants are non toxic and environment friendly in comparison to such petroleum based products.

Today science has also managed to make soy based foams. These foams play an important role in refrigerators, coolers and automotive interiors.

A temperature of 20 – 30 Degree Celsius is considered most suitable for the growth of soya plants. The hot summer months of May and June are ideal for soya bean cultivation.

Soya plants can grow in many types of soils. These plants grow best in rich alluvial soil that is moist at the same time.

Soybean plants enrich the soil by nitrogen fixation.  Nitrogen fixation is a mutually beneficial process in which the plant and bacteria depend on each other. As such the bacterium accumulates the atmospheric nitrogen and supplies it to the plant. It is therefore recommended to mix the particular type of bacteria with the soybean plant just before planting.

Soya pants begin to bloom by the months of July, August and September. The flowers are recognized to be white or rich violet in color.

Soybean plants begin to ripe by late September. One will notice that by this time the leaves of the plant acquire a yellow color. The soybean plant is ready to harvest by mid October and November, as the leaves that have become brown start to fall away and the ripe pods of soybean get revealed.

They use large machines called ‘combines’ for the purpose of harvesting soya beans. The function of combines is to collect and arrange the soybeans in a tank that is generally found at the back of the machine. There is header in the front part of the machine that is responsible for cutting and collecting the soybeans. Hereafter, the combine removes the attached pods and stems from the actual beans and deposits them into the machine’s tank.

Almost 90% of the world’s soya bean production is associated with the countries of U.S, China, Brazil, Argentina and India. However U.S is by far the largest soybean producers and exporters in the world accounting for approximately 75 million tons of soybean production annually.

The numerous health benefits associated with soya beans is enough to explain the widespread popularity of soya food in today’s world. Apart from the great taste of soya food, these beans are also packed with proteins and phytochemicals that work wonders for your health. Let us go through the health benefits of soybeans in detail.

Millions of women across the world suffer from a common issue of menopause. Modern day research shows how Asian women experience fewer menopausal side effects, as compared to women of the Western countries. The consumption of a diet high in soy content by the Asian women was a major reason behind this discovery.

Dietitians and physicians across the world consider isoflavones effective in preventing hormonal cancers like breast cancer, colon cancer as well as prostrate cancer. All kinds of soy food contain isoflavones that do not allow the growth of blood vessels and hence are not in the favor of cancer syndromes. In fact Japan has invented a fermented soya bean paste known as ‘miso’ which is known to have led to a remarkable decline in breast cancer risk in women.

Even though the fact is that soy products are deficit of much calcium, but the presence of isoflavones make a major contribution in lowering the risk of osteoporosis. Isoflavone genistein make bones stronger thereby curbing down chances of bone breakdown. The presence of isoflavones genistein also helps in preserving bone tissue. Moreover there is more good news for the veggies as research concludes how unlike animal protein, soy protein stops the loss of calcium from the bones.

Good for the Heart

Soya food is also considered significant for lowering cholesterol and promoting good health. Appropriate intake of soya food stops and prevents the development of plaque in the arteries thereby, minimizing chances of a heart stroke and heart attack. It has been discovered that it is one of the attributes of isoflavone genistein which stimulates the flexibleness of blood vessels.

All soy food whether it is tofu or soy milk comprises a diet that is extremely rich in protein. Vegetarians are specially recommended to consume protein rich soy food as much as possible.  As such soy is known to contain all necessary amino acids that are vital for a healthy lifestyle.

The endless list of soya bean recipes will delight foodies and vegans! Moreover with the invention of TVP or Textured Vegetarian Protein vegetarians throughout the world have been blessed with the almost twin substitute of meat.

In countries like Japan, China and Korea soya bean and soya food products are a part of the staple diet.

Tofu is an outcome of coagulated soy milk. This nutritious soy item takes its roots from the land of China. A variety of mouth watering tofu food recipes include Tofu Skin Roll, Agedashi Tofu, Tofurkey etc

There can be no better way to consume rich soy protein than by this simple and delicious recipe!

This vegetarian cuisine is known to have originated from Indonesia. Basically tempeh is fermented soybeans that have a unique taste and flavour.

Apart from being highly nutritious soybeans may produce certain side effects.

The isoflavone content present in soya can sometimes trigger migraines. As such migraine victims are recommended to consult physician before intake of soya.

In uncommon scenarios, soy products have been found to disturb the normal functioning of thyroid, especially among kids and infants. Even adults suffering from hypothyroidism are recommended to consult physician before taking soy products.

Research shows that soy can sometimes lead to changes in hormonal levels leading to symptoms of goiter.

Some people suffer serious threats from food allergies related to peanuts, milk, shellfish and even soy. The symptoms of soy allergy may include a runny nose, itchy rash, breathing and swallowing trouble, dizzy sensation as well as remarkable drop in blood pressure levels.

Certain gastrointestinal disorders have sometimes been associated with soy food. Excessive consumption of soybeans could lead too an upset stomach, nausea, loose stools and diarrhea.

Research shows that there are chances of soy products having a negative reaction with certain thyroid related medications.  Excessive soy consumption may also intervene with the body’s capacity to absorb minerals like zinc and calcium.

There are certain studies that have suggested soybean consumption could affect testosterone levels in males thereby triggering the male sex drive. The phytoestrogen content present in soy is known to have led to this state in men. Research also shows that soy intake could affect the quality of the sperms in men.

Soy Effect on Women
In depth studies and analysis has revealed risks of possible tumor growth among women with past or current breast cancer histories due to soy consumption. Once again the cause has been directed towards the phytoestrogen content in soybeans.