Caigua is a tropical herbaceous vine plant mostly native to South American countries. It acts as a substitute to cucumber and is a popular vegetable in the Andes region. It is also known locally by several other names, some of which are achojcha and slipper gourd. In Bhutan, it is known as kichipoktho. 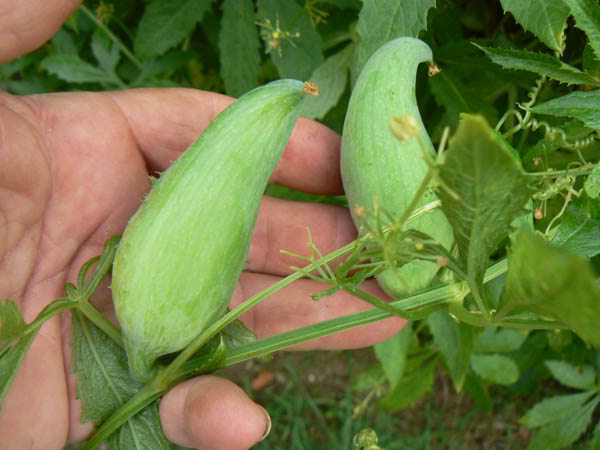 The scientific name for this species is “Cyclanthera pedata”.

The various parts of the Caigua plant are described below: 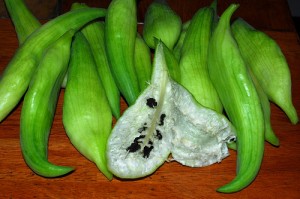 Length: The plant reaches a length of up to 40 feet.

Tendrils: Caigua is a climbing plant and it uses its long tendrils for this purpose.

Leaves: The leaves are palmately divided and have an elliptic shape with a width of about 4 to 5 inches. They are divided into 5 or 6 lobes or leaflets.

Flowers: The flowers are unisexual. The female pistillate flowers are solitary and sessile having no stalks. The male flowers are staminate; they have stamens but no pistils. The males occur in clusters of about 10 to 20 flowers.

Fruits: The fruits are pale green in color. Their structures are like a flat, oblong-shaped berry. The fruits have a curved bottom and are hollow inside. Individual fruits are about 20 centimeters long and 8 centimeters wide. The surface of the fruits is irregular and has longitudinal striations and tender spines. The endocarp is spongy and white and the mesocarp is succulent. The central cavity has a parietal placenta where the seeds remain attached.

Seeds: The seeds are attached to the placenta. They are black, square and wrinkled.

The Caigua plant is grown in many parts of Central America, South America and the Andes. It is found in the Caribbean Islands, Colombia, Bolivia, Peru and Mexico. These plants are also quite popular in eastern countries such as North-Eastern India, Bhutan and Nepal. The plant mainly likes warm, moist climates but has a good tolerance for colder conditions as well. They can grow in elevations of up to 2000 meters above sea level.

The plant has been in use for several centuries. Evidence for this can be found from the ancient Peruvian phytomorphic ceramics depicting images of the Caigua fruits. The Moche culture’s fascination for this plant was evident from their artwork and ceramics depicting these plants.

It is very easy to grow Caigua from its seeds. While growing Caigua, the best time to sow the seeds is during the hot weather in early April. The seeds must at first be planted in pots and covered with compost soil. After the seedlings start to appear, they can be converted to a greenhouse or some other frost free location. The seeds should be planted in their final location only after all the chances of frost are gone. In the northern latitudes where the chances of frost are more, these plants should be provided protection against frost and cold for several weeks.

The plants should be adequately watered until they are well established. In dry weather, they may need more watering than required at other times. The soil used to grow these plants should be rich and fertile. A high-potash feed can be added to the soil to increase its fertility, though this is not necessary when the original soil itself is adequately fertile.

The rate of growth for these plants is very high. When the plants reach a height of around 4 or 5 inches, the tendrils start to appear. A hedge or a fence should be provided for the plant to climb and position itself so that it can gain clear access to adequate sun’s rays.

The flowers start to appear during the period from July through to September. Pollination is aided by hoverflies as well as other beneficial garden flies and insects. The flowers are small and cream-colored. They are followed by the appearance of a large number of small fruits with pointed ends. They grow as pairs or as single fruits.

In tropical climates, these plants can grow at an astounding rate, reaching almost 40 feet in one season. However, the growth rate is not that high in northern temperate climatic zones.

These plants are usually disease-free, have a high tolerance of cold and neglect and can grow well without addition of any fertilizers or pesticides.

A characteristic feature of the Caigua plant is that its production is proportional to the amount of fruits harvested. Thus harvesting more number of fruits will yield more plant production.

You can also save the seeds if you want to. For that you have to allow some of the fruits to mature. You can then collect the seeds and store them.

The following chart represents the nutritional facts for per 100 grams of Caigua:

Apart from the above mentioned nutrients, the seeds, leaves and unripe fruits of Caigua also have the following nutritional elements: 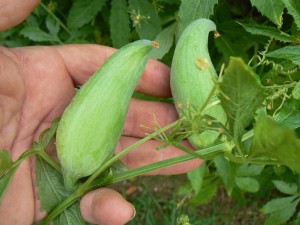 The leaves, fruits and seeds of this plant are edible. The fully grown yet immature fruits are normally cooked and consumed. These fruits however can also be used in the preparation of pickles and salads. The subtle flavor of Caigua reminds one of other edible species of the cucurbitaceous family. The leaves and young shoots of the plant may be eaten as green vegetables.

In South America, the fruits are consumed raw or cooked after removing the seeds from them much like the bell peppers. The mature fruits can be stuffed with cheese, fish or meat and baked to prepare stuffed peppers.

The fresh fruits of this plant can also be used to prepare juice. The fruit seeds can be used to make tea.

Caigua has been in use by South Americans for several centuries and it is said to have many health benefits.

The fruits, leaves and shoots can be consumed raw or cooked as green vegetables. The fruits can be fried or implemented in salads. However, it is important to wash the fruits and leaves well before using them for any edible purposes.

Caigua fruits and leaves can be bought from herb suppliers and vegetable shops. The seeds are available from online shops. Caigua is also available as a fruit powder from several dealers. One pound of Caigua fruit powder costs almost $30.

Here are some interesting facts about the Caigua plants.

Eating Caigua in large quantities can damage eyesight. A patient undergoing treatment for symptoms of hypotension and hypoglycemia should avoid consuming these plants as they can cause certain side effects such as nausea, headache and blurred vision. Also the patients of elevated serum transaminases or active liver problems should not eat Caigua.

It is advisable for pregnant women and nursing mothers to avoid Caigua since not much information is available in this area.

Here are some images of Caigua trees and fruits. 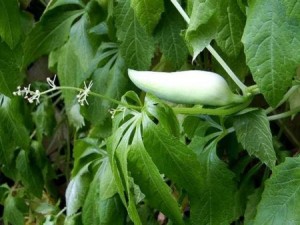 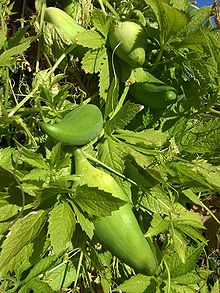 The Caigua is one of the most beneficial and useful native plants in these parts of South America and has been extensively used for thousands of years due to its rich medicinal properties and culinary uses.