Ajwain seeds are the seeds obtained from the Ajwain or Ajowan plant. These seeds are used as a spice in cooking. This plant is closely related to Cumin, Dill and Caraway. The seeds are also known as Bishop’s Weed, Ajowan, Caraway and Thymol Seeds. The Ajowan plant mainly grows in various regions of India. The umbels of the plant mature and produce the seeds. Ajwain is also highly regarded for their medicinal value. 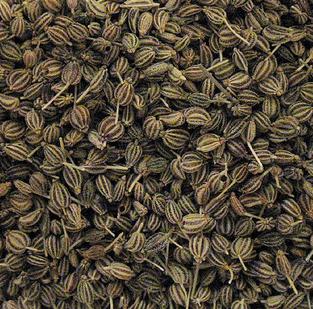 The scientific name for this plant is Trachyspermum ammi.

It is known by various names in different languages:

Here is a general description of the Carom Seeds and plants:

Shape: They are oval in shape with a ridged appearance.

Size: The seeds very small in size. They look like smaller versions of Cumin seeds.

Color: Their color varies from yellowish-brown to grayish green.

Taste: Raw seeds have a hot and pungent taste.

Fragrance: The smell of these seeds resembles that of Thyme as Ajwain seeds contain Thymol.

The Trachyspermum ammi is an annual herbal plant growing up to 3 feet in height. Their appearance is similar to that of the Parsley plants. They have narrow green leaves and small delicate flowers. The fruits pods of these plants are often called seeds for their seed-like appearance. 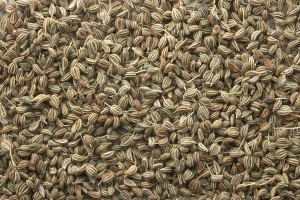 The Carom plants are believed to have originated from Egypt in Middle East. They are widely grown in India, Afghanistan and Iran.

They are widely grown in gardens for their seeds which are used for both culinary and medicinal purposes. These plants can be grown easily form the seeds.

Well drained loam soil with a pH between 6.5 and 8.2 is ideal for them. They grow well in cold temperatures ranging from 15 °C to 25 °C. The plants can grow both in direct and partial sunlight. Relative humidity between 65% and 70 % are required for them to grow properly.

The umbels are harvested after they are properly matured. Harvesting is done during the later parts of winter or earlier in spring.

Here is the nutritional value for 100 gm of this spice:

Numerous health benefits can be derived from this spice: 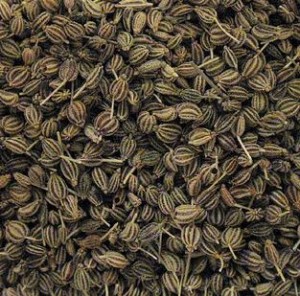 This spice is used for numerous culinary purposes. It is counted among the most used spices in various parts of the world.

Here are the names of some recipes using this spice:

No spice can be a perfect substitute for another one. But, one can use dried thyme or oregano instead of Ajwain if the later is absolutely unavailable.

How to Store Ajwain

They should be stored in air-tight containers in a cool, dry place away from humidity and direct sunlight. These seeds do not have a very long shelf life because their essential oils evaporate within a short time, making the seeds lose their flavor. 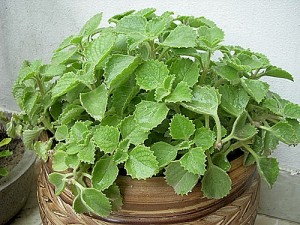 Oil is extracted from the Ajwain leaves, flowers and seeds following the steam distillation process. This colorless to brownish oil is highly valued for its medicinal properties and is widely used in pharmaceuticals. The oil also has many edible uses. It is used in various cosmetics as well.

It is generally safe to consume Carom Seeds in moderate amounts during pregnancy as it helps in digestion during this time. The seeds also maintain proper health of the unborn child. But, it is advisable to consult an expert in case of any adverse effects. Ajwain water is also believed to accelerate recovery after childbirth.

They do not cause any side effects when consumed in moderate amounts. But over consumption may cause some adverse effects in some people. The seeds stimulate gut secretion which can worsen the condition of an existing stomach ulcer. This spice should also be avoided by individuals suffering from diverticulitis conditions, liver diseases and ulcerative colitis. One should consult a doctor if any side effects occur.

These seeds are not generally used for losing weight. They have appetite stimulating property which is not desirable for dieters. Ajwain can help to lose a little weight by stimulating the bowel movements. But this weight loss is not permanent and is very likely to return within a short time.

This spice is generally available in Indian and Middle Eastern spice stores. The price for 14 once of the seeds ranges from $10 to $ 15.

Find out some interesting Facts about these seeds:

Here are some images of this amazing spice. 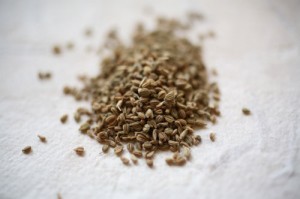 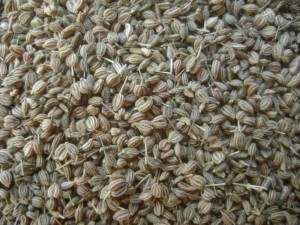