With increasing medical research, herbs are now being recognized as an effective remedy for many health problems. Goldenseal is one such herb that is highly revered for its medical values. Know all about Goldenseal, its history, constituents, medical uses and health benefits. 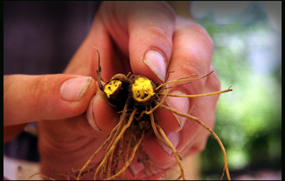 Goldenseal is one of the most famous herbs. It is a perennial medicinal herb of the buttercup genus Ranunculaceae.

Where Does Goldenseal Grow?

Goldenseal is specifically found in the eastern region of North America. It is also seen in southeast Canada and regions of Europe. It can be located as a wild plant in areas between Ontario and Arkansas. It grows across South East United States and is cultivated in Washington and Oregon. It was once grown widely in the Ohio Valley until the region began to witness widespread deforestation and settlement.

What Is Goldenseal Good For?

Goldenseal is used for a number of different purposes. It is primarily used as a medicine for curing problems like liver disease, duodenal ulcers, loss of eating sensation, swellings and even cancer. Following use of Goldenseal liver ailment sufferers have reported improvement.

It is also applied as an antiseptic over wounds and as anti-inflammatory ointment over painful or painless swollen bumps.

Native American tribes in north U.S not only understood the powerful medicinal value of this herb but also used it as a coloring material. They used the yellow roots of the herb as a dye for their clothes and also to stain their faces.

Goldenseal is thick and yellowish in appearance. It is irregular in shape and has a thin bark. The leaves have deep lobes and appear in clusters of two. The herb usually has a tall, fork-like stalk with multiple leaves at its tip. Two leaves are generally located near the ground. During blooming season, greenish or white flowers are at the stalk tip. 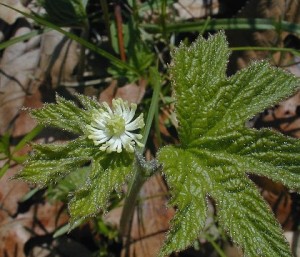 Goldenseal was there in the American soil long before white people “discovered” it. Native American tribes such as Iroquois traditionally used it as a medicinal cure for eye irritations, liver problems, skin diseases, digestive ailments and diarrhea. When European inhabitants landed on America, they learned about the benefits of Goldenseal from the native tribes. It became a part of colonial medicinal care.

Goldenseal found a mention in the 1798 essay “Collections for an Essay Toward a Materia Medica of the United States” by Prof. Benjamin Smith Barton. This American physician described the herb as an Iroquoian cure for cancer. Early Cherokees saw in Goldenseal cancer curing powers.

The herb actually became popular in the early 19th century when renowned herbalist Samuel Thompson promoted it as a drug with almost magical powers. Today, Goldenseal is used as a popular herbal cure in US and Europe.

Goldenseal has been found to be a powerful cure for many health problems. What are the benefits of Goldenseal from the medical point of view? Know about some of the major Goldenseal herb benefits.

The herb can be used as a good expectorant and clears congestion from the chest, lungs and sinus.

Goldenseal dosage can relieve constipation. It may also be used to treat infections of the intestine and bladder.

Goldenseal has astringent properties. It can be used for contraction of body canals and tissues. This explains why it is employed for treating internal bleeding and excessive menstruation.

Goldenseal drops on ears have been found to cure earache. Goldenseal eye drops are also seen as effective in treating Conjunctivitis problems. On repeated application of Goldenseal eyes can show a return to normalcy.

Applying goldenseal poultice over abscesses, boils or carbuncles can help reduce and cure them. Goldenseal helps reduce inflammation and destroy bacteria in these regions. It gives rise to no side effects while being used as a poultice.

The herb is used to treat bladder infections. Goldenseal dose is also strongly active against infections of the sinuses, mouth, intestines, throat, stomach, mucus membranes, vagina and urinary tract. It strongly resists infection by bacteria such as E. Coli, yeasts like Candida and Fungi.

It is also used in treating Vaginitis, a condition that involves infection and swelling of the vagina.

Side Effects of Goldenseal

Goldenseal is an herb. This explains why Goldenseal root side effects from this plant are rare. However, Goldenseal medicinal uses can result in a few problems like heightened nervousness, digestive problems, nausea and oral and throat irritation. Application of the yellow-orange Goldenseal on skin as a liquid often leaves stains.

This herb should not be used on people with high blood pressure. It has been reported to cause some other problems like Bilirubin increase and uterine contractions. In people using Goldenseal blood pressure can be affected. It is not advisable for women to use goldenseal while pregnant. In pregnant women using Goldenseal miscarriages may occur.

Goldenseal contains alkaline compounds that apparently have antibiotic properties which are effective in treating digestive problems and healing of wounds. The root contains a number of Isoquinoline alkaloids like Canadaline, l-hydrastine, Canadine, Berberine, Hydrastine and traces of resin, fatty oil and other essential oils which give the root its anti-infective and antibiotic qualities.

Goldenseal is believed to reduce the effect of birth control pills in women. Using this herb as a medication has been found to make birth control drugs less effective in some cases.

Goldenseal is used as a natural treatment against yeast infections. A Goldenseal douche is found effective in treating Vaginal yeast infections. This is made by mixing one and a half tsp of Goldenseal powder with around three cups of water and stirring the solution with an electric blender. This herbal solution can be used to wash the infected vagina for a few times every day until the infection disappears.

Goldenseal with Echinacea is a great remedy for colds. A combination of Echinacea & Goldenseal liquid is often used to treat cold symptoms in sufferers. Following use of Goldenseal cold sores can be cured in a short while. In people using Goldenseal Flu symptoms are also cured.

Goldenseal is not recommended as a safe remedy for pregnant women. The herb shows uterine stimulant effects. It is best not to use this root until women are through with 37 weeks of pregnancy.

The possible risks for Goldenseal in pregnant women are not known. However, in Goldenseal berberine presence is supposed to be harmful for the fetus. This compound is thought to harm the fetus while crossing the placenta. Using it in the later stages of pregnancy can also raise the risk of Kernicterus, or brain damage due to high Jaundice, in newborns. If you are pregnant and thinking of using Goldenseal, talk to your healthcare provider first.

It is not safe for mothers to use Goldenseal while breastfeeding their kids. As aforesaid, Goldenseal contains a compound known as Berberine which can make breast milk harmful for drinking. Newborn infants, on exposure to this compound, can suffer from severe jaundice and develop brain damage (Kernicterus). Kernicterus causes abnormal accumulation of bile pigment in the nerve tissues and brain. This can give rise to permanent problems in babies.

Goldenseal is found to be a powerful medicine against sinus infections. This herb has powerful antibacterial properties which are very effective in fighting bacterial infections. Daily intake of Goldenseal can reduce Sinus Infection symptoms after a point of time.

However, another North American herb known as Echinacea is regarded as more effective than Goldenseal in combating Sinus Infection. Echinacea can provide relief in about two to three weeks time.

The powerful antibacterial properties of Goldenseal make it perfect to be used in curing gum disease. Goldenseal is highly effective in destroying the bacteria responsible for causing infection and inflammation in the gums of mouth.

Goldenseal is highly recommended by herbalists for curing Gastritis symptoms. Goldenseal has powerful astringent effect on the gastrointestinal tract which makes it perfect for treating swelling of the line of the stomach.

Goldenseal helps destroy intestinal parasites like Giardia. This is exactly why it acts strongly in curing Giardiasis. Giardiasis is an infection of the intestines with protozoa caused by water and water contaminated by Giardia protozoan. It is marked by nausea, diarrhea, abdominal discomfort and flatulence. Goldenseal Hydrastis Canadensis is not only used to control Giardiasis in humans but also in dogs.

Regular intake of Goldenseal boosts the immune system and aids in curing Herpes infection. Prescription drugs temporarily reduce and cure Herpes infection. But Goldenseal consumption can cause long-time treatment of diseases caused by infection of Herpes virus. Once cured by Goldenseal, Herpes Infection does not come back.

Impetigo is a highly transmissible skin disease caused by infection of Staphylococcus or Streptococcus bacteria. Applying Goldenseal powder on Impetigo sores as a paste can be highly effective in clearing up skin blemishes.

Lyme Disease is a severe inflammatory disease marked by appearance of rashes accompanied by fever and joint inflammation. It results from bacterial infection resulting from the bite of a deer tick. The antibacterial properties of Goldenseal make it very effective in combating Lyme Disease.

Goldenseal Myrrh Salve is a substance used for treating diabetic ulcers. It consists of herbs like Goldenseal that help lessen the severity of skin infections.

Goldenseal can also be used as a powerful nasal spray to provide relief from allergies. The antibacterial and astringent properties of Goldenseal make it an effective cure for sinusitis symptoms. It works great along with saline nasal spray. It helps thin out mucous and wash out pollen from nose. Goldenseal is a good natural remedy for curing Chronic Sinusitis problems.

Goldenseal comprises of the following elements:

When used along with Echinacea, Goldenseal helps in treating infections. It also helps lose weight. The herb detoxifies the body and cleanses the entire physical system to promote weight loss.

Warts are small, benign bumps arising over the skin surface in regions such as the fingers, hands and feet. However, the presence of these outgrowths on the genitalia increases risk of skin, penile and cervical cancer. Goldenseal tincture, when used on the affected skin area as a moist compress, has been found to be effective in treating the lumps. Native Americans used Goldenseal as a cure for warts.

In Goldenseal Vitamin A, E and C can be found. It also contains B-complex vitamins and manganese. 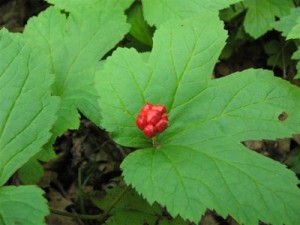