German chamomile is an annual plant belonging to the Asteraceae family. The flower is known for its medicinal properties. The flower is grown in many parts of the world, such as Europe and Asia. 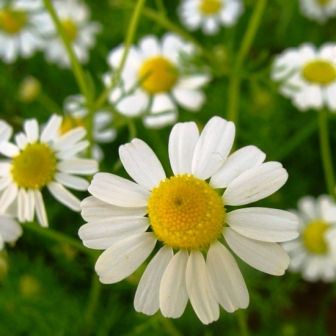 The scientific name for this plant is “Matricaria recutita”.

Other Names for German Chamomile

The flower is also known by several other names such as 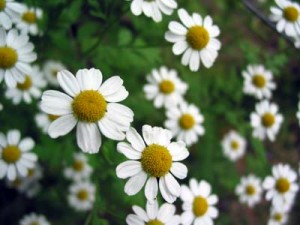 The German Chamomile plant has small and dainty flowers that look much like daisies. These flowers are arranged in paniculate capitula. The white ray-like petals are all spread around a raised disc-shaped yellow center. The florets are equipped with a ligule. The width of a petal is less than one inch. The flower receptacle is swollen, hollow and lacking in scales. The stems on which the flowers grow are long, smooth and thin and light green in color. The stem has several branches. The narrow and long leaves are tripinnate or bipinnate. Sometimes these plants can grow near the ground and at other times they can be found in herb gardens. The plant can reach up to a height of 3 feet. The flowers of this plant have a sweet fragrance. German chamomile plant has a fibrous root system.

German Chamomile seeds require light for germination. Hence it is a delicate process to grow these plants from seed. Generally direct seeding is used to cultivate these plants. For proper growth and survival, the seeds need to be grown on open soil. It is important that seeds of superior quality are sown for vegetative propagation. The growing season lasts for two months. The seeds take one or two weeks to germinate. Seeds can be planted outdoors around the month of August. Alternatively, these plants can be grown initially in propagation trays around March. The number of seeds per gram of soil should range between 10,000 and 18,000. After the plants reach a certain level of maturity, they can be shifted to outdoors. Spraying chamomile tea on the plants aids in calcium absorption from the compost piles where they are planted. When they are grown outdoors, the seeds can be spread gently around some good soil. Individual plants should have a space of six inches between them. The plants are sturdy and strong after being firmly established. The plant can be grown in outdoors for gardening, landscaping and mass planting and can also be grown out of containers. It is however, advisable not to grow these plants in containers.

The plant can be grown on a wide variety of soils. However, a well-drained and sandy soil is preferred for growing German chamomile. The pH content of the soil should be between 7.0 and 7.5. The plant should have access to plenty of sunlight for healthy development. The plant needs to be watered regularly. However, care should be taken not to overdo the watering process.

The soil used for this plant should be tested before plantation. Depending on the results of the tests, certain minerals like phosphorus, nitrogen and potassium may need to be added. The major nutrients required by this plant for proper growth and development are as follows:

The best time to grow these plants is in autumn or during earlier months after winter. The rate of germination depends on when the seeds are sown. Plants which are sown late will have a lower germination rate. As a result, these plants will develop less number of flower stalks and growth of flowers will be less. 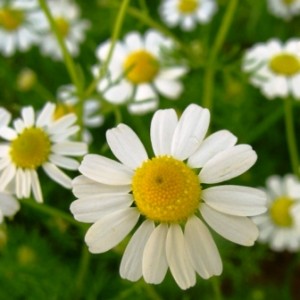 The German chamomile plant is native to a wide variety of regions all across the globe. Commercially, these plants are grown in

The Matricaria recutita flower plant is also grown in the icy regions ranging between North Caucasus and South Siberia.

The German chamomile is extensively used for its positive health effects. It has antispasmodic, anti-cholesterol, anti-inflammatory, anxiolytic and antimutagenic properties. The plant includes the following chemical components:

The flower extract of this plant is used to make essential oils, ointments and capsules. The dried herb of this plant is also used to make chamomile tea. Chamomile tea prevents the growth of fungus. It is thus often spread over seedlings to prevent damp and fungus. The plant is also used for cosmetic purposes. It is used to prepare a hair rinsing solution for blonde hair. In agriculture, this plant is known to facilitate the growth and overall health of plants used for the production of essential oils. The plant helps in increasing the production of these essential oils. It strengthens the scent and flavor of herb plants like basil, oregano, sage and spearmint. This plant is also used to manufacture herb beers.
German chamomile is also used in aromatherapy. The sweet fragrance of these flowers is believed to elevate the mood and bring relaxation to a person’s mind and body. Research shows that chamomile has a calming effect on our brain waves. Chamomile oil is used in aromatherapy to treat insomnia and sleep disorders.

The Matricaria recutita plant is popular for its beneficial health aspects. The plant is used to treat various health problems, such as

Apart from the above mentioned health issues, this plant also offers relief from inflammation. It facilitates a speedy recovery of wounds.

It offers relief from anxiety and calms the nerves. The plant extracts act as a sedative, helping us to have a good night’s sleep.

Extracts from German chamomile are used to make creams or ointments which have a soothing effect on the skin. In European countries, it is often used to this effect and also to treat eczema. It has strong tissue regenerating properties.

The oil of this plant helps in reduction of swelling. It also prevents the growth of viruses, bacteria and fungi. The oil is also an important antidote to premenstrual syndrome (PMS) as well as other menopausal and menstrual problems such as menstrual cramps.

The German chamomile oil has the following therapeutic properties:

Research on the benefits of German chamomile has also been conducted on rats. The results indicate that the plant aids in reduction of body weight.

Adults can drink the chamomile tea 3 or 4 times in a day between meals. The tea should be prepared in the following way: Two to four grams of dried chamomile herb should be added on a cup of simmering water and kept for around 10 to 15 minutes.

Capsules with strength ranging between 300 to 400 mg should be taken thrice daily.

Liquid chamomile extract can be consumed up to 1 to 1.5 teaspoons thrice daily.

Around 100 to 150 drops of chamomile tincture containing 45% alcohol can be mixed in hot water and consumed three times daily.

Chamomile tea can be cooled and used for gargling. An oral rinse may be prepared by adding 10 to 15 drops of chamomile liquid in 100 milliliters of moderately hot water. The oral rinse may be used thrice daily.

A few drops of chamomile essential oil can be added to hot water. The steam emitting from this mixture can be inhaled to soothe a cough.

A bath using chamomile oil can give relief from hemorrhoids and insect bites. This can soothe the skin and heal cuts and eczema. The bath can be prepared by adding 5 to 10 drops of chamomile oil or a quarter of a pound of dried flowers to a tub of water.

Powdered chamomile herb can be mixed with water to create a paste. This paste can then be applied to heal skin inflammations and infections.

A cream containing 3 to 10% of crude drug chamomile can be applied as an antidote to eczema, psoriasis or flaky and dry skin.

For children under the age of 18, the dosage is half of the adult dose. To deal with pediatric problems or with colic, chamomile tea can be consumed daily. The consumption limit for children however, should not exceed more than half cup or 1-2 ounces of chamomile tea.

The dosage for chamomile supplements, like any other herbal nutrition supplements, should be as per the recommendations made by doctors. The dosage varies, depending on the medicinal purposes for which it is used. 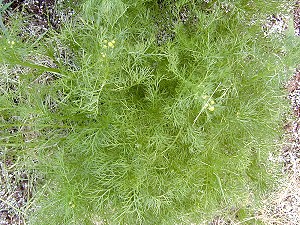 Side Effects of Matricaria recutita

German chamomile is widely used by people to avail its therapeutic qualities. However, certain side effects can be triggered by the use of this oil. The oil when used can exaggerate certain health issues. The oil can also react badly with certain other medications, herbs or supplements. It is thus advisable to consult a doctor while consuming chamomile and its products.

Asthma patients should avoid consuming chamomile as it may worsen the existing asthmatic symptoms.

Chamomile oil and extracts are generally considered safe for pregnant and lactating women. However, a doctor needs to be consulted to supervise the dosage or if it is suitable at all for the pregnant woman to drink chamomile tea or use chamomile products during her pregnancy. This is because consumption of chamomile oil may lead to miscarriage in pregnant women. Especially, chamomile should not be consumed at this stage as an essential oil or a tincture preparation.

Vomiting may be induced by drinking too much of chamomile tea of high concentrations.

Consumption of chamomile may lead to allergic reactions for people who are already allergic to other Asteraceae species such as daisies, asters, ragweed or chrysanthemums.

Profile of German Chamomile in Homeopathy

German chamomile acts as a good homeopathic remedy for people who find it difficult to cope up with pain. Some individuals may find it difficult to have control over their emotions and might often experience inner conflict, hostility and irritation. They might experience unpredictable moods, a hot temper and an active dislike of being touched. They feel stressful if they feel like their space is being invaded or if someone interferes about their matters. Often such behavior is displayed by children and such conditions are medically termed as Attention Deficit Hyperactivity Disorder or ADHD. German chamomile can give relief from such stressful mental conditions.

The German chamomile plant or its extracts can react adversely when it interacts with certain other drugs. Hence users of these drugs should consult a physician before consuming chamomile oil, herbs, flowers or ointments.

The following is a list of drugs with which the chamomile plant or its extracts can have a negative reaction:

1. Sedatives or drugs having a sedative effect, such as

2. Certain liver enzymes decompose Chamomile as well as other drugs. Chamomile can enter into a reaction with such        drugs.

Where to buy German Chamomile

German chamomile essential oils and ointments can be found in any aromatherapy shop.

Chamomile flowers are available in shops packed in pouches. The flowers can be bought from florists. Alternatively, they can be ordered from flower shops for home delivery.

The various chamomile products can also be brought online at reasonable prices.

Below are some pictures showing the German chamomile plant, with its flowers having white petals. 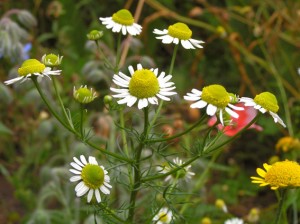 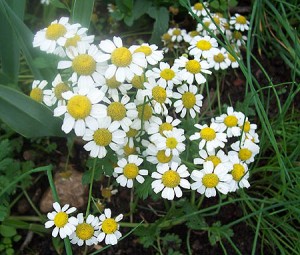 The German Chamomile plant has long been in use for its beneficial properties. In folk medicine, the plant has always been connected with female health. In fact, the word “Matricaria” essentially means “Caring for the womb”. Besides female health, its use in relieving mental stress, coupled with its sweet fragrance has made it a popular choice as herbal health supplement for millions.