Herbs have an array of benefits that enrich all living beings. One such plant having multiple benefits is Portulaca Oleracea, belonging to the family of Portulacaceae. The plant, although considered as weeds in some cultures, have great significance for living beings owing to its highly nutritious content. They can be grown without any fuss. They are very useful in food and medicine. 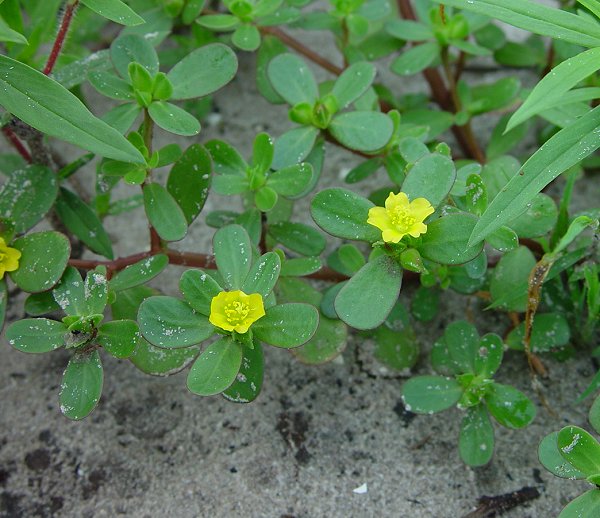 Common name of this plant is Purslane in the US, other than that it is known by a variety of names in different places, like Pigweed, garden purslane, common purslane, postelijn, pourpier, fatweed, munyeroo, portulat, ma chi xian,  Miner’s-lettuce, Cuban spinach, Miner’s-salad,  little hogweed, Pussle etc.

First thing which strikes the eye is its short appearance. Another variety known as Portulaca sativa shares some similar qualities but they have yellow leaves. It grows really fast and displays certain physical traits: 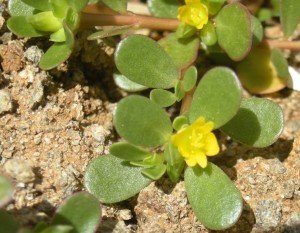 Height: The plant may grow up to a height of 35 to 40 cm approximately.

Stems: It has smooth fragile stems rising from the ground in multiple forms. Stems display a mix of green and red colors.

Leaves: Its green juicy leaves look like spoon. They follow a typical pattern of arrangement where they are grouped around the joint of the stem. They are around 1 cm broad and 3 cm long, with a slight tapering at the base.

Flowers: Purslane, flowers in the presence of ample moisture, generally between June and November. These yellow flowers are self fertile. They have four to five petals positioned at the center of the clusters.

Seeds: A single Oleracea may produce more than 200,000 seeds that are black, slightly wrinkled and glossy in appearance. In just a few weeks, one may witness the growth of this plant from tiny seeds into plants bearing lovely blossoms.

This plant is widespread all over the globe barring some places in Australia. ­­­North of Africa to Middle East sweeping over the Indian subcontinent to Australasia- a wide growth of this plant can be witnessed. ­

The plant is native to most of the parts of North America except a few places. Around 40 varieties are believed to be cultivated all over the world.

Irrespective of its importance as a food crop in US, it is cultivated all over for the benefits derived from it.

Climate and soil: Growing this plant is very easy as all that it requires is a dry and hot environment with occasional watering to moisten it when it is completely dry. For its growth no specific soil type has been listed and it has been found growing in any kind of soil.

It may just grow alongside your regular plants as it requires no special efforts. In general these plants are nutritious but they also have the ability to soak in toxins from their surroundings. This variety of Purslane is not ornamental but still widely common in orchards and gardens. It can be grown as a food crop in the garden from seeds. 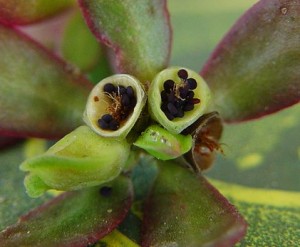 This plant has an annual life cycle.

This variety of plant is said to possess several qualities for which it is used in the preparation of medicines and food items. Having high nutrient value, extracts of this plant are highly capable of eliminating certain health issues in a natural and effective manner.

Packed with all the essential nutrients, Portulaca Oleracea is a highly popular edible item.

It is highly common as fodder for livestock.

Considering the essential nutrients that are packed within, the plant is a wonder herb in many ways.

Careful consumption is the best possible way of averting any form of mishap during certain ailments. The herb may also cause uterus contractions, for which pregnant women should not consume it.

They possess excellent nutritional value as the high content of essentials like Omega 3 fatty acids, Vitamins and minerals help in improving health of individuals. Those who refrain from having fishes can still obtain their daily dosage of Omega 3 fatty acids by simply consuming this leafy vegetable. 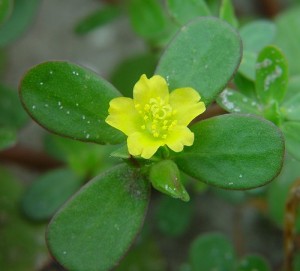 Alpha-linolic acid, potassium, calcium, beta carotene, oxalate etc are also the primary content of the plant when had raw or cooked.

If you detest tiny weeds growing around your home, primary care should be taken to avoid their entry since they start multiplying once they gain access to any area. If at all it begins to grow in and around your ornamental garden, you may get rid of it by pulling it out with hands or by mulching.

You may adopt certain measures like solarization to control Portulaca Oleracea. Herbicides containing pendimethalin or oryzalin can also be administered on the areas for chemically getting rid of them. This method is applicable in treating the weed problem on a commercial basis.

Common Purslane can be biologically controlled by a certain Purslane sawfly which feeds on them. Healthy turfgrass in the lawns to a great extent prevents the growth of Purslane, for which attempts to better their condition and growth should made.

As such there is no evidence of any toxicity in this plant category though some amount of oxalic acids and cardiac glycosides can be traced in its composition that may have toxic undertones. This has not been clearly stated.

Though it improves urine production, this process may adversely affect people with kidney stones, causing the granules to shift.

Status of this herb is of a weed in the US, where it is considered to be a minor crop but it is quite popular as a leafy vegetable in the rest of the world including the European, Asian and Middle Eastern countries. It is generally grown along with other crops like corn, tomatoes and onions its roots go deep into the soil which helps in carrying nutrients for the other plants. Prehistoric archaeobotanical discoveries and literature prove its existence in 3rd and 4th century.

Here are some of the images by which you can identify the plant. 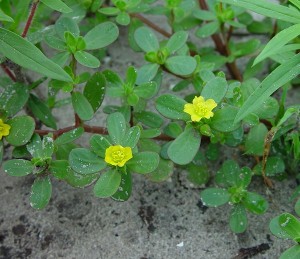 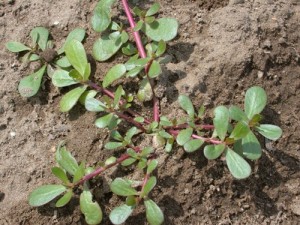