Leek is a leafy vegetable belonging to the Allium genus, Amaryllidacea family and Allioideae subfamily. The edible bundled leaf sheaths of the plant have numerous culinary uses. These edible leaf sheaths are sometimes mistakenly called stalk or stem. The vegetable has numerous health benefits as well. 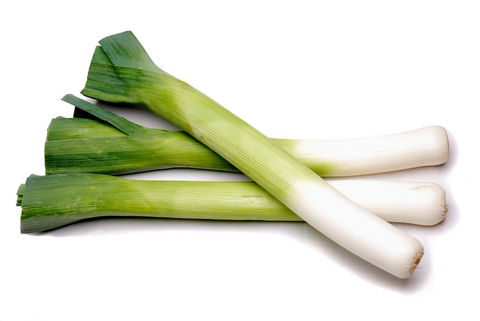 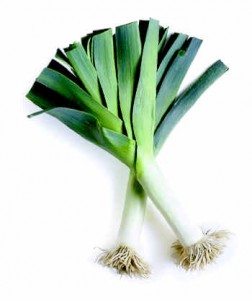 Find out what it is known as in other languages:

They bear resemblance to the appearance of large scallions with a small bulb and long, white, cylindrical stalks. Here is a general description:

Size: Cultivated Leek plants grow around 12 inches long with the diameter ranging between 1 and 2 inches. Wild Leeks or ramps are quite smaller compared to the cultivated species.

Flavor: The strong flavor of the cultivated species reminds that of shallots or onions but is more subtle and sweet. Ramps have a stronger and more intense flavor.

Taste: They have onion-like taste but are much less pungent.

Texture: It has a firm yet crispy texture in the raw state.

There are different varieties of this vegetable, including:

It is indigenous to Middle Asia but grows in various parts of the world including the Mediterranean countries and Western Asia. This vegetable has been grown in the western parts of Europe for a long time. It is cultivated in various North American countries as well.

Here is the nutritional fact for 100 gm of this vegetable:

They have numerous health benefits to offer with their rich nutritional content and various properties that are good for the human body. The principal health benefits include: 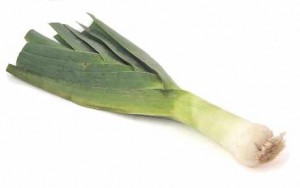 Stronger Immunity: It is rich in vitamin A which is well-known for its anti-infective properties. Vitamin A helps to improve immunity by maintaining the health and integrity of the mucosal lining of the throat, nose, digestive tract as well as the urinary tract. This vitamin is also crucial for the development and functioning of WBC (white blood cells).

Antibacterial Properties: Its antibacterial properties come from its alliinase contents, which is not as strong as in the related species garlic, but still strong enough to prevent various bacterial conditions. Once the vegetable is cut, its alliinase content reacts with oxygen and forms allicin, sulphur composite.  Researches have proved that allicin fights against staphyloccus and the bacterial strains of coli present in chicken. This helps to prevent the disease caused by these microorganisms.

Diuretic Properties: Some studies suggest Leek to have diuretic properties that make it effective against edema or fluid retention. Scientists are still carrying out researches to find out the potential of this vegetable for fighting this health condition.

Prebiotic Functions: This green vegetable belongs to the oligosaccharide groups of carbohydrates. These carbohydrates help healthy bacteria to grow within the lower bowel by transforming the metabolic activities of microflora into bifidobacteria.

Calorie and Fiber: It is low in calorie with 100 gm of the fresh vegetable containing only 61 calories. Additionally, it is an excellent source of both soluble fibers and insoluble fibers.

Prevention of Inflammatory Diseases: Leeks can reduce the chances of developing various inflammatory disorders including type 2 diabetes, atherosclerosis and rheumatoid arthritis. Their kaempferol and polyphenol contents also make them useful for fighting many chronic inflammatory conditions.

Protection of Blood Vessel Linings: The flavonoid kaempferol also plays a vital role in protecting the blood vessel linings from the harmful effects of reactive oxygen and free radicals. Kaempferol can promote the nitric oxide production in the body. Nitric oxide helps the blood vessels to dilate and relax, decreasing the risks of hypertension.

Good for Bones: It is a good source of vitamin K as well as minerals like calcium and magnesium, which makes it beneficial for strength and development of bones.

Laxative Properties: They have mild laxative properties, resulting from their rich tannin contents. This makes them useful for fighting constipation. 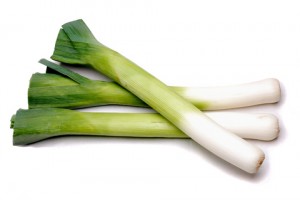 The main culinary and medicinal uses are mentioned below:

The medicinal uses of these plants are similar to those of their close relative garlic. When the leaves are broken, they secrete a kind of gel which has certain medicinal uses. The gel is applied to cuts, burns and skin rashes for accelerating their healing process. Poultice made from the Leek leaves is useful for treating cysts. The affected area needs to be covered with the poultice before tying the wound with a bandage and then leaving it on for a few days.

Leeks are generally chopped into 5 to 10 mm thick slices before cooking. The layered structure of the plant often makes the slices fall apart. It is essential to wash them for proper cleaning prior to cutting. Washing becomes impossible after slicing. It is advisable to wait for 10 minutes before cooking the cut slices to allow the alliinase in them to form allicin. This makes sure one gets the utmost benefits from it. There are various ways of preparing Leeks with the most common ones being:

Boiling: Once boiled, the vegetable turns soft and its flavor becomes mild. Chopping the Leeks prior to boiling is advisable; otherwise, the fibers running the length of these vegetables tend to tangle into a mass while chewing.

Sautéing or Frying: They can also be enjoyed after sautéing or deep frying. Fried Leeks are crispy due to their crunchy texture, but still maintain the delicate flavor. The vegetable is typically cut into long strips before they are sautéed or fried.

Raw: It can also be eaten raw in salads after washing it properly.

It is used for preparing numerous main course dishes and side dishes. Here is what one can cook with the vegetable: 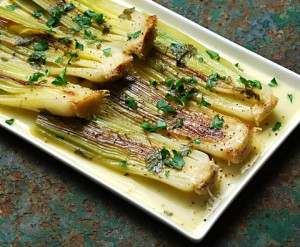 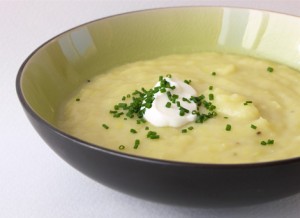 No other vegetable can perfectly replace the delicate flavor of Leek. But, one can use green onions, scallops or yellow onions as its substitute in case it is absolutely unavailable. Garlic can also be used in some recipes. It is vital to use the substitute vegetable in the proper ratio. Yellow onion and garlic has much stronger flavor, therefore, needs to be used in lesser amounts compared to Leek.

It does not generally cause any side effects when consumed in moderate amounts in foods. However, overconsumption may lead to certain health conditions in some individuals.

Their rich folic acid (folate) content makes them beneficial for pregnant women. Eating foods rich in Folic acid during pregnancy helps to prevent various birth defects in the newborn, especially those associated with the spine and brain of the baby.

It is available all year round at local vegetable stores and in the farmer’s markets. One should make sure the leaves are fresh while buying to get the strongest flavor and to store them for a longer time.

Cooked Leek can be stored for one to two days when stored in a covered container in the refrigerator.

Freezing is not a useful way for preserving it unless one is planning to use it only as a flavoring agent in soups and similar dishes. Freezing often makes it mush and bitter. One can freeze it whole or cut it in small slices before putting it in an airtight freezer bag and storing it in the freezer. Freezing allows storing it for around three months.

Find out some fascinating facts about this vegetable:

Check out the following images to get a clear idea about their appearance so that it becomes easier to identify them in the market. 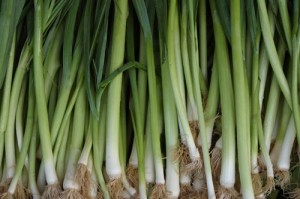