The harebell is a perennial plant with a very graceful appearance. This plant belongs to the bellflower family. It bears delicate bell-shaped flowers that are mostly blue or violet in color. In fact it earns its popular name ‘bluebell’ by virtue of the shape of these papery flowers. 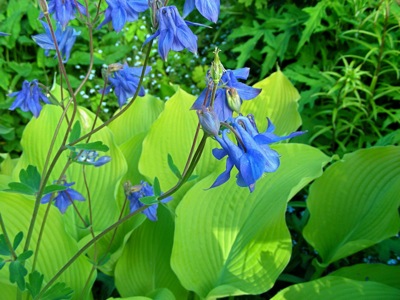 Folklore associates the flower with the world of magic and illusions where there are witches, goblins, spirits and even the Devil himself. As such the beautiful plant is much more interesting than it appears to be.

Harebell is also significant for its medicinal properties. It leaves are edible and are used in the preparation of salads.

The harebell is scientifically referred to as campanula rotundifolia.

The harebell plant is distinctly identified by the sleek slender stems and pale blue flowers.

Flower Color: These flowers may have rich violet-blue, white or pink color depending on the species. The petal lobes are somewhat triangular with a brilliant outward curve complimenting its beauty.

Flower: As a matter of fact the flower earns its name from the bell shape that is attributed by the fusion of the petals. Moreover each flower has a total of five distinct points. This harebell flower is about 15 mm long. These pretty flowers bloom somewhere in the time period between late spring and the onset of autumn.

A single flower may be supported by a single thin stem or at times a bunch of flowers grow in what appear to be loose clusters. The sepals behind the flower petals are pointed in shape and green in color. 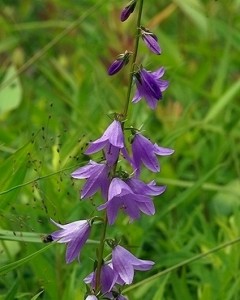 Seeds: Like most flowers Harebell is also a pollinating flower. The seeds of the flower are contained in capsules that measure approximately 3-4 mm in diameter. These capsules are designed in a manner that facilitates the process of pollination. As such this capsule has pores at the base through which the seeds get discharged.

It is also quiet interesting to observe the milky white latex that the plant secretes when broken or injured. This characteristic has been associated with Campanulas in particular.

The Harebell plant can occur in a wide variety of habitats ranging from plains to subalpine regions. This plant has the tendency to thrive even in chalky grasslands and acid heaths characterized by uncultivated land with scrubby vegetation and sandy soil. As such harebell campanula can adapt to wide range of soil pH.

Harebells are usually found in dry grasslands characterized by nutrient deficit soils in regions of northern Europe, Britain and North America. These plants are also spotted growing on and nearby the Michigan sand dunes. It is easy to cultivate this plant however it has a tendency to become weedy.

There are a whole lot of varieties of the genus Campanula or the harebell plant. All the known species usually bear blue or white flowers. 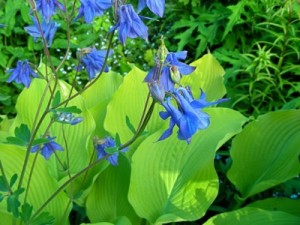 Some of the popular species are as follows:

This variety is commonly referred to as the ‘Bluebell’ in Scotland and ‘Harebell’ in England.

This variety is spotted to be a popular garden plant especially in the United Kingdom. It goes by the common name of ‘Canterbury Bells’.

Some of the other varieties have been enlisted below.

The following are the cultivation requirements of the plant.

Soil: Though the plant has a tendency to thrive in a wide range of soil pH, the kind of soil with 6.5 to7.5 pH is ideal for the plant’s growth.

Sunlight: The plant grows best when exposed to full sunlight. However the plant should be subjected to partial shade in areas where the temperature is extremely high.

Water: Water supply is essential for the plant especially during dry spells.

You can plant larger species of the genus almost anywhere in the garden. However smaller species do well in a rock garden.

You are recommended to sow the plant seeds on the surface by early spring.

Spacing: While sowing the seeds of the smaller species outdoors, it is advisable to maintain a distance of 5 -10 inches between the seeds. However there should be a distance of 15-20 inches for the seeds belonging to the larger species of the harebell.

In the scenario of indoor sowing, the plant germinates in a time period of 2-4 weeks. Thereafter, a temperature of 21 degree Celsius will be ideal for the plant. It is recommended to transplant the biennials by near autumn.

This plant can be propagated through seeds and via divisions, alike. We have already discussed its propagation by seeds and the different procedures of sowing the seeds.

The propagation of the harebell plant by divisions can be carried out by planting clumps of the plant directly into the soil. This plant can also be propagated by its basal cuttings. Please note that it is important to uproot the whole plant including the portion that is underground. Thereafter each of the stems is to be potted in separate pots.

Folklore has attributed magical powers to the harebell flower and plant.

Folklore has it that witches used the juice of the harebell flower to transform themselves into hares. It was also believed that the flower would allow the mortals to see the fairies of the magic world.

Some traditions also considered the plant to be unlucky or ominous. It was said that the plant had the ability to attract evil spirits along with the Devil himself. The harebell flowers were also termed as Dead Man’s Bells as the chiming bells was an omen associated with death. No wonder ‘should be picked at your peril’ was a phrase associated with the flower, which ultimately left the blooms unpicked in gardens in those days. It was held that doing so would offend the fairies and witches.

The leaves of the Harebell plant are used in the preparation of salads. Its roots that are more or less parsnip-like are used as radish.

Chewing harebell roots is recommended for those suffering from depression. This part of the plant is attributed with properties that can cure depression. It also helps with problems of the heart and lungs.

The root extracts of the plant are infested with properties that can provide relief from ear ache as well. It was the Chippewa Indians who first discovered this medicinal property of the plant.

The plant decoction is also beneficial as a treatment for sore eyes. This decoction can be used as a drink or a wash to treat sore eyes.

Please note that it is recommended to seek a professional herbalist’s prescription before consumption or usage.

The Harebell plant is much more interesting than it appears. Check out some fun facts about the plant.

Side Effects of Harebell

There are no side effects associated with the consumption or usage of the harebell plant. However you should always consult a professional herbalist prior to usage or consumption.

Here are some images of Harebell: 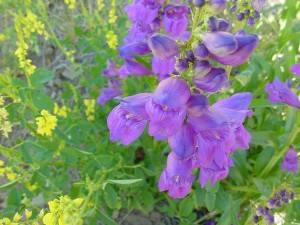 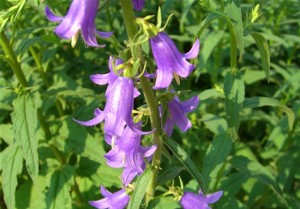