Garlic Mustard belongs to the mustard family or Brassicaceae and emit a flavor very similar to the true garlic when it is crushed. This biennial is also known by several other names like garlic-wort, hedge-garlic, jack-by-the-hedge, jack-in-the-bush, sauce-alone, garlic root, poor-man’s-mustard and mustard root. The plant can reproduce on its own because it is self-fertile. 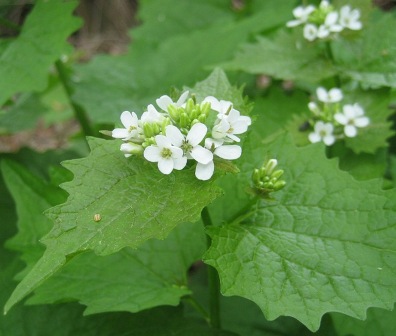 Many native plants look similar to this plant.  Some of them are sweet cicely, toothwarts and early saxifrage. Only difference between them is the smell which is emitted on crushing it.

Alliaria petiolata is the scientific name of this plant.

Some of the features which will help in its identification are: 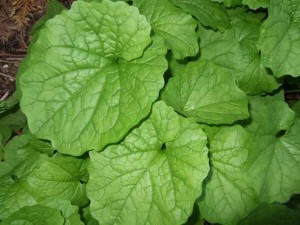 Leaves are circular and look like clumps in the first year when it is grown but change gradually growing about to a size of 15 cm in length. They become triangular and are arranged in alternate manner on maturity.

White flowers bloom in clusters by spring in the second year of growth. On growing further, they attain an elongated form. It is composed of four white petals.

Fruits are long and slim containing pods that are 5 cm in length. These are known as silique. They ripen between the months of June and September.

Seeds are black and glossy. More than a hundred seeds can be produced by a single plant which can stretch across a huge area.

It tastes like garlic but with a tinge of bitterness.

This plant is extensively found in Europe, its native place, barring the extreme southern range. In the north of America, it spreads across British Columbia, Oregon, Washignton, continuing up to South Dakota. It is treated as an invasive plant spreading to Virginia’s southern ends along with Canada, Nebraska and towards the west in Kansas. Apart from that, it is also

cultivated in Sri Lanka, India as well as Africa (north). 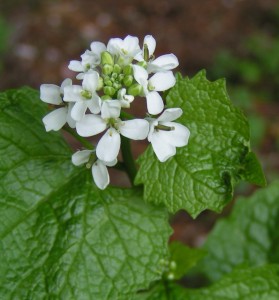 It grows in varied habitats. Open woodlands, hedges and disturbed forests are its primary habitats in Europe whereas in North America, it grows in deciduous forests. Southern Ontario along with Midwestern United States also has prevalence of this plant. It is considered to be one of the major invasive species in Canada. Basically, it can be seen growing closer to water sources like rivers and streams.

Originally it belongs to Europe but probably it was introduced by colonialists from Eurasia to some parts of America and  it gradually spread rapidly at a fast rate every year to other parts of America. It had several implications as a medicinal plant apart from culinary field.

It has a 2 year life cycle in which germination of seeds take place in spring and by the next year flowers bloom on it. After the dispersal of seeds the plant dies, but from the hundreds of seeds again germination takes place after a gap of almost 2 years.

It does not favor a particular type of soil but for best results well drained soil, slightly moist can be provided. It cannot grow in extremely acidic soils. It grows best in partial sun though it can survive in full sun as well.

Leaves as well as the plant’s roots are edible. Hence they are effectively used in a number fo culinary purposes.

Some health benefits which can be derived from it are: 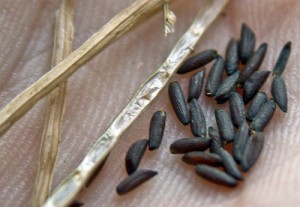 Though very less is known about its application in herbal medicine, some instances are not uncommon.

It is notorious in present times for invading areas where native plants grow and finally displace them. One primary reason for it is the edibility of this plant among the creatures living in those habitats. The production of glucosinolates and flavonoids apart from some more secondary compounds are responsible for decreasing its viability among the grass-eating animals. It is toxic to certain invertebrates and plants which have declined over the years in the habitats they grow.

From nature’s garden, garlic mustard is one such herb which is consumed as leafy vegetables. It might cause allergic reactions while you are handling it, so be careful.

Here are some images of Garlic Mustard. 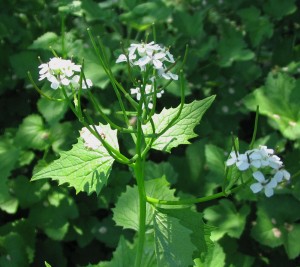 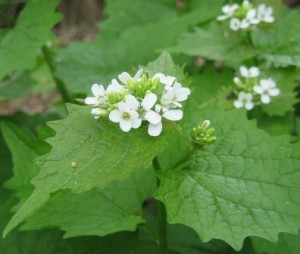