Carpobrotus Edulis is a native fruit/vegetable from South Africa, where it has been consumed by ethnic groups since centuries. This is a crawling evergreen plant with two subspecies. Succulent leaves and fruits are used in making sweet delicacies and curries. It has bright, yellow colored flowers which set it apart from the other species. These trees can survive many years as they are low maintenance but extremely useful to mankind in many ways. 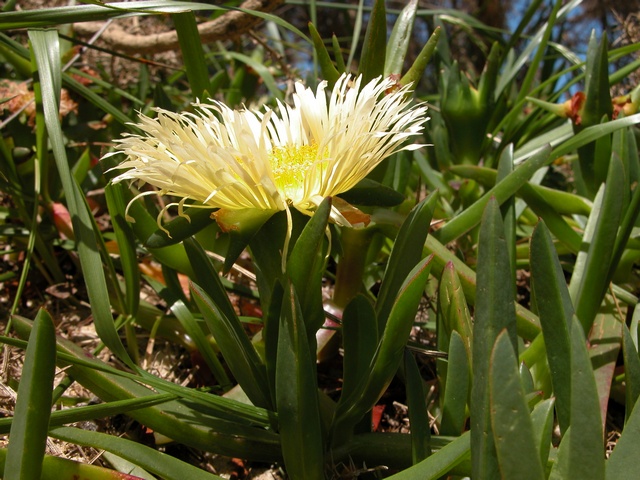 It is known by different names like Hottentot Fig, Highway Ice Plant, Ice plant and Pigface. Sour Fig is the name by which it is known in South Africa.

The physical features of these plants are:

Flowers : It blooms in the months of August, September and October, in shades of yellow blending with light pink. It has a diameter between 100 and 150 mm. The flowers are extremely flamboyant with several stamens that are bordered by stigma appearing like star fish.

Fruits : Edible fruits of almost 35 mm diameter grow on these plants, which attain a yellowish tinge on maturity. These pulpy fruits are fashioned like a gyrating top that grow on thick stalks.

Stems : It has juicy stems that rise upward in a curling manner. It forms a dense cover on the ground.

Leaves : Leaves are also juicy, which closely gathers along the succulent stem. In their younger stage, they are yellowish or greenish but over time they turn reddish. 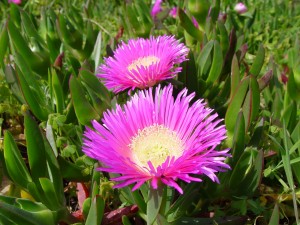 Aroma : After ripening, the fruits emit a pleasant fragrance.

Taste : On eating the fresh fruits, you would be able to feel their salty and tangy taste, which is quite dominant.

It is prevalent in inland slopes and coastal regions, stretching from Namaqualand till the Eastern Cape. It covers Northern, Eastern and Western Cape in its distributional range.

The plant grows well in full sun. It can grow in different kind of soils, if they are well-drained. Being tolerant to drought, it can grow in sandy soils, sand dunes, flat ground, slightly brackish soil as well as rough patch of gardens.

Make sure that there is ample room for it to grow and spread over walls and boundaries. Very less water is required in winter.

This plant can be propagated via root and stem cuttings during summer or springs.  Seeds are easily dispersed by the carriers like animals which germinate fast.

For a refreshed feeling, plant extracts of juice can be added to bath water.

No such side effects have been found but over consumption might lead to complications.

Natives used to consume it for healthy pregnancy but its implications in modern times are not yet researched. This is why consulting a physician before consuming it during pregnancy can help avert problems. 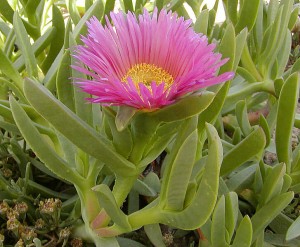 It produces edible fruits and leaves that have been consumed since ages as suggested by historical findings. Fruits alone can be eaten by drawing out the pulp with mouth from within, after slicing the base.

Several online stores sell these plants at reasonable prices. You can also visit your nearby nursery to buy these.

This plant has been recognized as an invasive species in California, Mediterranean countries and Australia. This is a result of its escape from cultivated areas to those places where they are removed by hand or mechanically. Ice Plants have destroyed ecology to a great extent by erasing a lot of original vegetation as they are like thick ground mats.

Among the popular recipes prepared with the fruits is that of a sour jam and Sour fig preserve.

The plant species has been represented in these pictures. 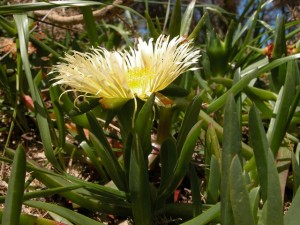 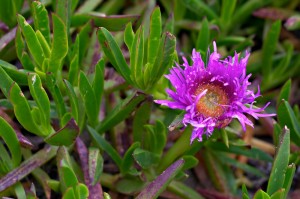