7 of the Best Types of Salmon

Salmon is, without doubt, the most popular family of fish in the United States. According to a recent report released by NOAA, it is one of the highest valued fish, as commercial fishing of salmon generated a revenue of $598 million in 2018. As a popular seafood, it is classified as nutritionally dense, oily fish packed with omega-3 fatty acids, protein, vitamin B12, selenium, phosphorous and dietary minerals. Salmon, being an excellent source of dietary nutrients and minerals, helps lower blood pressure, reduce inflammation, protect bone health, and improve functions of the heart and brain. 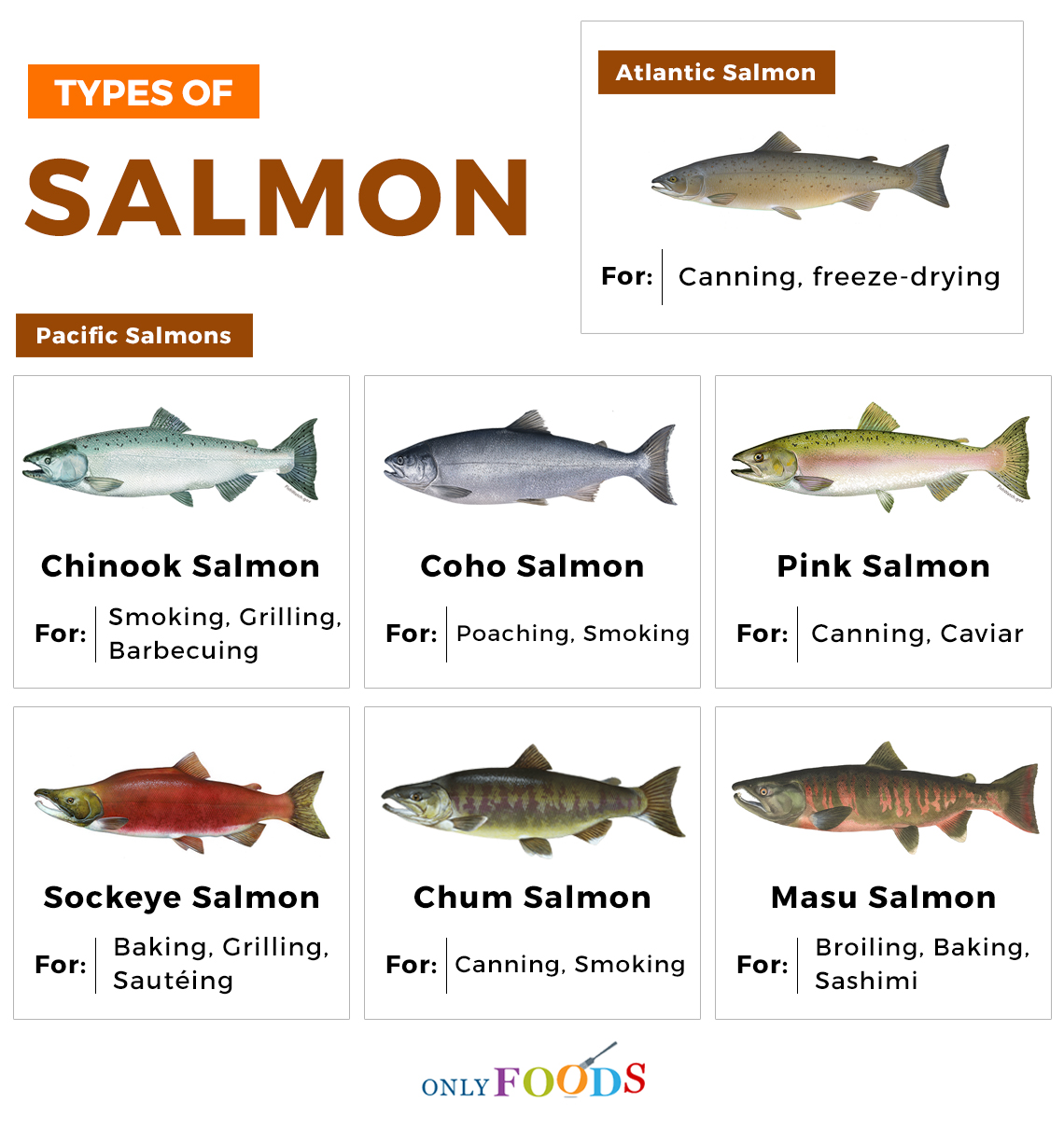 7 of the Best Types of Salmon

Different Types of Salmons to Eat

The fish are typically classified by the geographic location where they are found. The varieties occurring in the Pacific Ocean belong to the genus Oncorhynchus and are called Pacific Salmon. Those located in the Atlantic Ocean are part of the genus Salmo and called Atlantic Salmon. Both the types are consumed and are used for preparing canned, and smoked salmon, sushi, sashimi, and numerous other dishes like burgers, lox, gravlax, and lomi salmon.

These varieties thrive in the waters of the North Pacific off the coast of Canada and the United States. Because of their rich, intense flavor, they are commonly used in several American dishes.

It is the largest among the Pacific types. Apart from the North Pacific Ocean, it is found in the rivers that flow from California through Alaska in western North America, and the Asian streams that range from the northern parts of Japan to the northeast Siberia. Named after the indigenous Chinookan people, this one has been largely caught in the US, Canada, and Russia, as well as produced and marketed in New Zealand. As a food item, it has a delicious, buttery, moderately rich taste, soft-textured flakes, and white to dark red flesh.

The coho salmon, identified by its dark blue back and silver-colored side, has been traditionally found in Hokkaido, Japan, the Bering Sea along the eastern coast of Russia, mainland Alaska, and Monterey Bay in California. While the American and Russian fisheries commonly catch this variety, it is also considered a popular game fish in North America. Historically, native people included it as a staple food in their diet and also traded it with other tribes. The fish is known for its moderately delicate texture, medium rich taste, and reddish-orange meat.

It is the smallest among the Pacific salmon species, found in large numbers in the coastal waters and rivers in the Arctic and Pacific Oceans, ranging from the Sacramento River in California to the Canadian Mackenzie River, as well as the Siberian Lena River to Honshu in Japan and Korea. This species has been a traditional food source for the Salish people. While it is not farmed in significant numbers, commercial harvesting is the chief support of both American and Russian fisheries in the North Pacific. It is valued for its mild flavor, delicate texture, and rosy pink flesh.

Best for: Canning, smoking, salt-curing its roe to make caviar

It is the third-most abundant species in the Pacific, after humpback and chum salmon. The sockeye is native to the Columbia River, Ten Mile River in northern California, northern Hokkaido in Japan, Bathurst Inlet in north Canada, and the Siberian Anadyr River. Some freshwater sockeyes are found in British Columbia, Washington, Alaska, California, Oregon, Idaho, Utah, New York, Colorado, Nevada, Montana, Wyoming, and New Mexico. Traditionally, it has been an essential part of the diet of the Salish people. It is one of the most common salmon species that is commercially harvested by the American, Canadian, and Russian fisheries. It is a rich-flavored fish with a firm texture and bright reddish-orange flesh.

It is one of the largest (second only to the Chinooks), and probably the most widely distributed species among all the Pacific varieties. The chum salmon occurs in the Yukon, Mackenzie, and Amur Rivers, the Bering, Laptev, Beaufort, and Okhotsk Seas, and the waters of Japan, Korea, the Canadian state of British Columbia, and the US states of Alaska, California, and Oregon. This variety has been traditionally used as a source of dried salmon. It is commercially harvested in North Pacific, mostly by the Japanese fisheries, followed by the Russian and American fisheries. It is noted for its mild flavor, firm and coarse texture, and light pink-orange flesh.

The masu, distinguished by its darkened back, bright red stripes on the sides, along with a crimson tinge, is a variety of salmon native to the northern Pacific along the coast of East Asia. It is found in the Sakhalin Island, Kuril Islands, Kamchatka Peninsula, and Primorsky Krai in Russia, and to the south through Japan, Taiwan, and Korea. Several subspecies exist, including the masu, Formosan land-locked salmon, amago, Biwa trout, and Iwame trout. It is a commercially valuable species captured in fisheries, considered a popular game fish, and raised for aquaculture. It has a delectable, refreshing taste, tender texture, and orange flesh.

It is the only salmon species native to the North Atlantic, and the rivers that are flowing into the ocean. This large fish is found in the rivers of Spain and Russia in Europe, as well as the Naugatuck River tributary and the Housatonic River in the US. For many centuries, European fishers used hand-made nets for capturing Atlantic salmon. It still remains a highly sought-after fish for consumption and is farmed or raised for aquaculture. Fly anglers consider it a prized recreational fish. When it comes to its culinary profile, this one has a moderately mild taste, medium-firm texture, and pink to orange flesh.

Other Types of Salmon

Danube Salmon: It is a large freshwater fish that belong to the salmon family and is found in the basin of the Danube river in Europe. Also called huchen, it is one of the less commonly available types.

Steelhead: Although this ray-finned fish belongs to the salmon family, it is a type of trout found in the freshwaters and oceans across North America. It has orange flesh like a salmon, but a milder flavor and tender texture.

Farmed salmon are those that are bred by fish farms using the process of aquafarming or aquaculture, and are kept in netted pens. Wild salmon, on the contrary, live and breed in natural environments like lakes, rivers, and oceans. Humans do not control their breeding, feeding, and health, like they do for the former.

Salmon varieties raised in farms have higher amounts of omega-3s, omega-6, and saturated fat. They also provide you with 46% of more calories obtained mostly from fat. Wild salmon, on the other hand, contain more minerals, such as zinc, iron, and potassium.

Research has shown that farmed salmons have a higher level of contaminants that the wild-caught salmon. As a result, wild-caught salmon is a safer and healthier option for those who are anxious about consuming pesticides and animal drugs.

Q.1. Which one is the healthiest variety of salmon?

Ans. All the types of wild-caught salmon, including the chinook, coho, sockeye, and chum that are captured in Alaska, are healthy choices. Since they are rich in omega-3 fatty acids, they help lower cholesterol and are good for your heart health.

Q.2. Which salmons are the most expensive?

Ans. The chinook or king salmon, valued for its high-fat content, rich taste, and soft melting texture, is the most expensive of all the types. In 2017, a 45-pound chinook captured from the Copper River was recorded as the costliest salmon because restaurants in New York and Seattle paid $50 per pound to buy it directly from the fishermen.

Q.3. Which types are commonly used for making sushi?

Ans. Restaurants throughout the globe use either Norwegian/Australian ocean-farmed Atlantic salmon or Chilean/Norwegian ocean-farmed salmon trout. Some of the finest sushi restaurants in Japan, however, serve sushi toppings made from the chinook, chum, or masu salmon. Roe obtained from chum salmon is also used for the purpose.