22 of the Best Types of Coffee to Keep You Refreshed

There are umpteen times when we have resorted to a cup of coffee either for instilling a feeling of freshness, to drive away sleepiness or for any other reason whatsoever. The brewing methods play a significant role in the strength and flavor of coffees, making one stand out from the other. There are different ways of making this beverage, as it could merely be an instant coffee, which is perhaps the fastest way of preparing it by adding brewed beans to milk, water, and a little sugar.  It can also be blended with tea or even made as a cocktail by including alcohol. 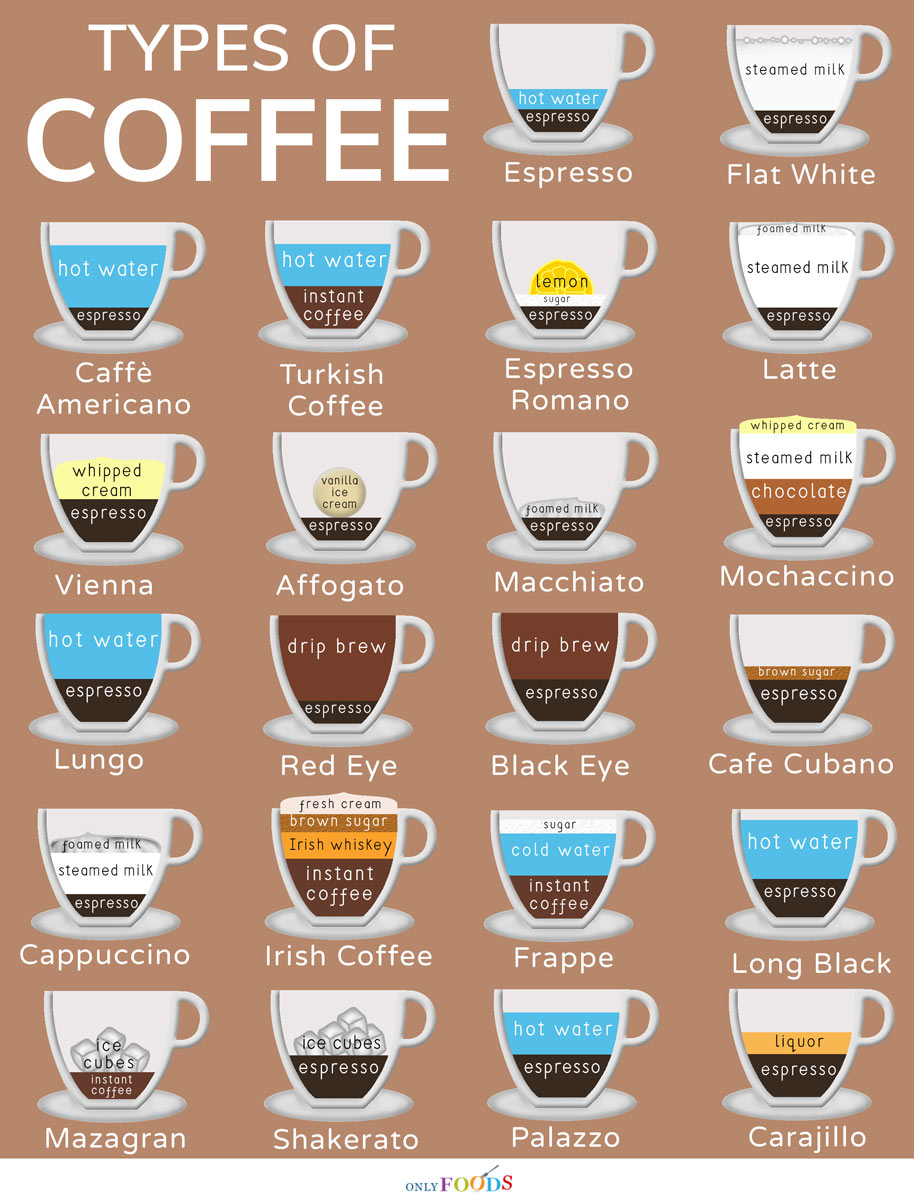 22 of the Best Types of Coffee to Keep You Refreshed

One of the basic types of coffees, a short black (alternately called) is made using a single shot, while the doppio or double has two espressos in a single cup. In spite of having higher caffeine per unit volume, the overall content is less compared to regular coffee, since the serving size is smaller.

Espresso diluted with hot water gives rise to this coffee, with the strength varying by the quantity of water and the number of espresso shots (single or double) added. The popular belief has it that during World War II, American soldiers would prepare such kind of drinks to help their beverage last for a longer span. Iced Americano, the chilled variation, involves the addition of cold water to the espresso.

Café Latte, translating to milk coffee, is prepared from espresso and steamed or foam milk. The addition of milk gives it a sweet taste, thus making it a perfect introductory drink. Flavoring syrups are often added to intensify its sweetness. Variations of latte include substituting the coffee with other drink bases like matcha, rooibos, turmeric, or mate tea.  Almond or soy milk could also serve as replacements for the whole milk. The iced latte is a variation, most famous in the United States, with chilled milk and espresso poured upon the ice, and syrups or sugar used for flavoring.

One of the best and popular varieties of coffee, Cappuccino has similar ingredients to latte, the main difference being that the milk used here is not so steamed, thus making it appear less foamy. Baristas and coffee bars where this drink tops their menu chart, often add garnishes of chocolate shavings or powder on top. Cappuccino Freddo is the cold variation popularized in Greece and Cyprus, topped with foam prepared by frothing cold milk. Other beverages that bear similarity to cappuccino are cortado, flat white, and caffe macchiato.

The flat white has espresso and microfoam (steamed milk with small bubbles and a glossy texture) as its primary ingredients. This beverage was said to have originated in Australia during the mid-1980s in Sydney’s Moors Espresso Bar. New Zealand also claims of inventing this coffee in Auckland around the same time. The upper layer of the flat white is brown, with a thick, velvety texture. Its popularity spread worldwide and has become famous in the United States and the United Kingdom, being an addition to Star buck’s menu.

Double shot espresso or ristretto when poured over hot water, results in this kind of coffee, which also originates in New Zealand alongside Australia. Though similar to Americano, it has a greater aroma, stronger flavor, and a more distinct crema, since it is prepared using less water.

Macchiato or Café Macchiato is prepared from an espresso shot, as well as foamed milk, added in small amounts. Macchiato in Italian means spotted or stained, and this coffee gets its name because of the mark, left by milk on the espresso’s surface, as it is added.

Alternately known as Caffé mocha or mochaccino, it derives its name from Mocha, a city in Yemen. Similar to café latte, it has espresso and milk as its main ingredients, with sugar and cocoa powder being the extra addition. For the chocolate flavorings, chocolate syrup, milk, or dark chocolate may even be added. Whipped cream often replaces the milk frothing as a topping. A dash of cinnamon or cocoa powder and marshmallow, serve as popular garnishes. White caffe mocha prepared from white chocolate is a variation of this coffee.

The preparation involves two espresso shots as well as whipped cream, which serves a substitute for sugar and milk, enhancing its creaminess.

Affogato, less of a coffee and more of a dessert, means “drowned” in Italian, justifying its preparation. A scoop of vanilla, drowned in an espresso shot is all that goes into the making of this drink. Other ice cream flavors like honeycomb, coconut, and berries are occasionally added, in place of vanilla, especially when served in restaurants of America or other parts of Europe apart from Italy.

Finely ground unfiltered coffee beans boiled with water and sugar make for this exceptional drink. Cardamom, salep, ambergris, and mastic serve as flavorings. Besides being popular in most Turkish homes, it is an integral part of their wedding rituals. The pot mostly used for preparing this coffee is a small one with a long handle, traditionally known as cezve. It is usually served in kahve finjanı, a small porcelain cup.

This is a hot coffee, made using espresso, and hard liquor like whiskey, anisette, or brandy. Legend has it that this drink originated at a time when Cuba was a province of Spain. The troops resorted to having such a kind of beverage by blending rum and coffee to attain energy. Besides Spain, it has also gained popularity in the United States, Italy, and Mexico, though the preparation process may differ. For instance, in America, caramelized sugar and whipped cream are additionally used apart from the main ingredients.

A red eye comprises of brewed coffee with a single espresso shot.

The black eye is the stronger version of the red eye, made from double espresso shots, thus being high on caffeine.

Also known as Cuban espresso, Cuban pull, and Cuban coffee, this espresso shot has brown sugar added to it, enhancing its sweetness. Though mostly made in an espresso machine, a Moka pot is also an alternative. Darker roasts are used in making traditional Cuban coffee, with most of them having a thick creamy layer on top of the espresso.

It is prepared with one or two espresso shots along with sugar and a dash of lemon juice, which helps to lessen the bitterness of coffee. A lemon twist is placed at one end of the cup to intensify its aroma. In spite of its name, it has no relation to Rome or Italy, and there are speculations of it to have originated in America or France.

Irish coffee a cocktail has Irish whiskey, sugar, and hot coffee as its main ingredients, alongside a topping of cream. The choice of coffee varies as it could be caffé Americano or even a variety of filter coffee made using a capsule. Chef, Joe Sheridan, has been attributed to inventing this coffee in 1943, in Ireland’s Foynes Port. In some bars, the cream used for topping is sprayed, while a few may even shake fresh cream gently and add a dollop of it as a topping to attain a smooth texture. Outside Italy, the serving pattern of Irish coffee differs, as in Spain, the whiskey, coffee, and cream appear in three different layers, one on top of the other. Bars of Southeast Asia, serve iced coffee-whiskey cocktail as Irish coffee.

An iced coffee variety originating in Greece, its preparation process involves instant coffee, water, and sugar. Ice cubes and even milk, though optional, may be added, and provision of a drinking straw in the glass completes the presentation of this drink. An outcome of an accidental invention by a representative of Nescafe in 1957, it is widely sold in all Greek cafés. The word frappe in French translates to “chilled in crushed ice.” Frappe has become popular in other countries as well, though variations occur in the ingredients and manner of preparation. For instance, in Bulgaria, Coca-Cola replaces water, while in Serbia, milk and ice cream with a dollop of whipped cream go in the making of frappe.

Also known as café mazagran, it is an Algerian cold coffee with a sweet taste. It attains its name after the Mazagran fortress of Algeria, finally granted to France in 1837. Prepared by pouring hot coffee over ice, many describe it as a beverage using water in place of milk. Mazagran has variations as in Portugal, lemon is included in the espresso or strong coffee and ice mixture. In Austria, a shot of rum is added to the ice-black coffee combination and often had in a single gulp.

Espresso shots and ice cubes go into the making of Shakerato, an iced coffee with a frothy texture. Prepared in a cocktail shaker, some prefer giving it an alcoholic touch by adding Baileys to it.

An iced coffee variety, the palazzo is made with two espresso shots and chilled immediately post the brewing process. A topping of sweetened cream gives it a smooth, frothy texture.  Palazzo is mostly prepared using a Moka pot.

Other coffee varieties apart from the ones mentioned above include Café de olla (flavored with cinnamon), Melya (flavored with honey and cocoa powder), Carajillo (a combination of coffee and whiskey) and Yuenyeung (tea-coffee combination).