Pink peppercorns are not exactly a peppercorn. It is actually dried berries of Baies rose plant. This peppercorn is very popular in French cuisines. It is a very popular spice ingredient which gives a unique pink color to the dish and that makes it most interesting. 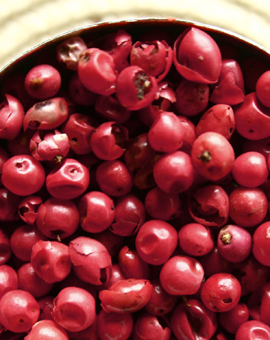 Pink peppercorn comes from Baies Rose plant. The scientific name for this plant is Shinus molle.

Since Pink Peppercorn comes from the Baies rose plant, it is also known as Rose Baises.

Baies Rose is a small sized tree which has many compound leaves with symmetrical and thin leaflets on each side of the leaf. The peppercorn berries grow in clusters on the tip of branches. At a very young age, the berries are white in color. After that it turns into pink, light pink or dark red. 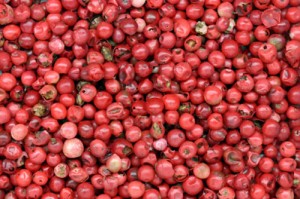 Pink peppercorn (shinus molle) tree is largely grown in Madagascar. They are also grown in Australia, Mexico, Peru and other South American countries.

The round berries are 2 – 3 cm in diameter. Pink peppercorns have a fragile and thin skin that can easily be taken off.

This peppercorn has a fragrant, sweet, spicy and delicate flavor. The subtle flavor is reminiscent of sweet berries and citrus zest. The delicate peppery flavor comes out when grounded.

Pink Peppercorns has the color of a rose which produces an elegant look to any dish.

Pink peppercorn plant can be grown in a container as well as in the ground. Black soil is the best for cultivating this plant.

A single tree can produce around 150 – 200 kilo fruit a year. The berries are generally harvested in summer.

How to Prepare Pink Peppercorn?

To get the peppery flavor, crush the peppercorns in a mortar or pestle. It can be combined with black, green and white peppercorns and used as a seasoning or garnish. Pepper must be added towards the end of cooking. Otherwise, overcooked pepper can ruin the taste of the cuisine.

Pink Peppercorn has an influence in local Peruvian cuisines. This peppercorn gives a different kind of taste which is closer to chilies rather than black pepper. It is added in delicate fish and meat dishes. It is used in sauces and marinades. They are also used in desserts, ice creams and fruit sauces. It is not only good to eat, but they are also used as a garnish in numerous cuisines. It can also be eaten uncooked.

Some popular recipes and sauces are: 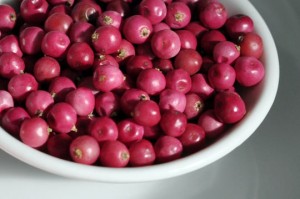 It can fight against flu, cold, infections and also gives relief from muscle stiffness and aches.

Where to buy Pink Peppercorn?

This peppercorn is very expensive. It can be brought from spice store. To ensure freshness, it must be bought in small quantity.

How to Store Pink Peppercorn?

Freeze-dried peppercorns can be kept in a dark and cool place for 6 – 7 months. After that, it tends to lose its flavor.

Pink Peppercorns can appear toxic if added in a large quantity.

Here are some interesting facts about this spice-

Some people confuse this peppercorn with pink berries which comes from an ornamental plant found in California and Florida. It may cause allergy once eaten.

In 1982, FDA (American Food and Drug Administration) prohibited the trade of this peppercorn in the United States because of possible allergic effect after consumption. But the ban has been lifted later on.

Here are some fabulous images of Pink Peppercorn as given below: 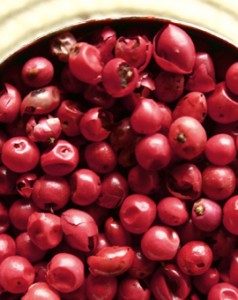 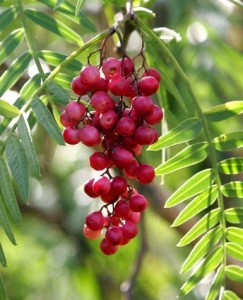