Phytolacca americana or American Pokeweed is a large perennial herbaceous plant native to eastern regions of North America. Common Names of these plants include American nightshade, garget, inkberry, pigeon berry, poke root, pokeweed, red ink plant, redweed and chui xu shang lu. Some parts of these plants are used for edible and medicinal purposes while other parts are toxic for humans and livestock. 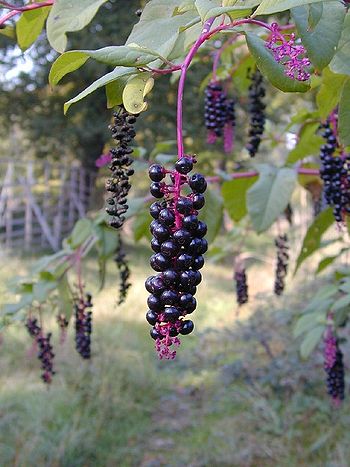 These herbaceous plants have a very attractive appearance.

Height: These plants can grow up to 10 feet in height; however they usually do not grow above four to six feet.

Stem: The color of their fleshy stem varies from green to red and purple.

Leaves: Their alternate leaves grow approximately 16 inches in length with a coarse texture. The light green leaves have a somewhat unpleasant scent.

Flowers: They have white flowers growing up to 0.2 inch in width. They have five petal-like sepals instead of true petals. 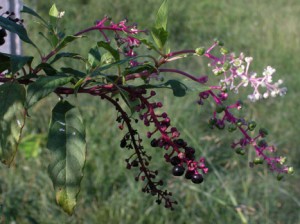 Fruits: These plants grow dark purple berries in racemous clusters that resemble blackberries. The berries are round with flattish top and bottom. Raw berries are green turning white and then purple as they ripen.

Root: The taproots of these plants go deep into the soil spreading horizontally.

These herbal plants are found throughout eastern and mid-western regions of North America and the Gulf Coast. They can also be found in different regions of the far West.

It is quite easy to grow these hardy perennial plants from seeds. They wilt every winter growing back next year from the same rootstocks. These roots do not have any nitrogen fixation ability. The Phytolacca americana plants flower between early summer and early fall.

Soil: These plants grow well in almost all kinds of soils with adequate moisture. They can tolerate high amounts of calcium in the soil; however they do not survive in saline soils.

Soil pH Requirements: They can tolerate a wide range of pH levels. The soil pH may vary between 4.7 and 8 for them to grow well.

Sunlight: These hardy plants can grow well both in full sun and under a light shade.

Young tender leaves are harvested as required. Ripe blackish-purple berries are handpicked or plucked using a harvester. Young stems less than 1 foot high are harvested before they turn red.

These medicinal plants have some health benefits to offer. However, one should use these roots and leaves with proper medical guidance as it is not considered to be a safe herb. A derivative of these leaves have therapeutic properties. It is also being considered as an anti-HIV agent. The roots of these plants have anti-inflammatory, alterative, cathartic, anodyne, expectorant, narcotic, hypnotic and purgative properties.

Here is the nutritional value of 100 gm dry shoots of these plants:

These plants have many edible and medicinal uses despite being highly toxic. The American Pokeweed berries are consumed after removing the toxic seeds. It is generally believed that the berries and leaves of these plants lose their toxicity once they are properly cooked. However, any edible use of these plants is highly controversial as these Pokeweed plants are toxic. 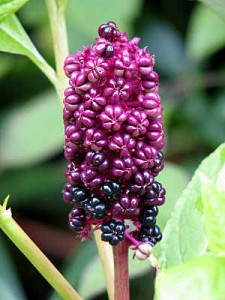 It is advisable to avoid using the Poke Root plants in any form during pregnancy.

How to Cook Phytolacca americana

The leaves of these herbal plants should be blanched repeatedly in order to remove all harmful constituents before using them for any edible purposes. The same should be done with the young shoots. The toxic seeds of the ripe berries should be removed before using these berries for making pies and jellies.

Some people advice against consuming any part of these plants ̶ even after blanching and boiling them repeatedly. According to them, some toxins may still remain in these leaves and stems after they are cooked. The greens of these plants may cause vomiting and diarrhea in some people. Consuming uncooked American Pokeweed berries can result in severe stomach cramp, vomiting and nausea.

Here are some interesting facts about these plants:

Phytolacca americana plants are widely used for different culinary and medicinal uses despite being highly toxic. Properly cooked greens of these plants can be highly nutritious while the pies and jellies made from these berries are delicious. However, the medicinal uses of their roots should be done only under proper guidance.

Here are some images of Phytolacca americana plants and their berries. 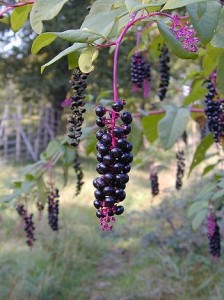 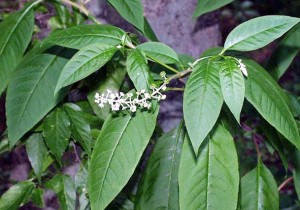