What is Monarda didyma?

Monarda didyma is an herbaceous perennial plant that belongs to the Lamiaceae family. It is popular for its fragrance. This plant is commonly referred to as “Bee Balm”, as bees favor this plant. The fragrance of this plant is very similar to Citrus bergamia. Due to this reason, some people call it “Bergamot”. Apart from Bee Balm and Bergamot, the many varieties of this plant is known with different names in different regions, such as – 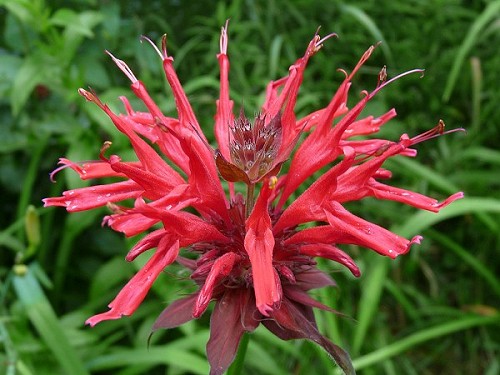 Monarda didyma is native to the eastern part of America, starting from Ohio to Maine and south to Tennessee, Georgia and Michigan. This plant has been naturalized in Europe.

It is also found in some other American states like Washington, Oregon and few parts of eastern Canada.

Natural habitats of Monarda didyma are semi wild fields, banks of pools or streams. At present this herb has become very popular among gardeners. 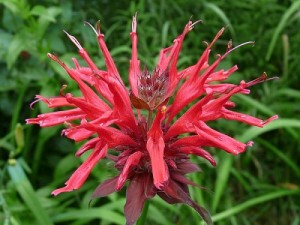 The Oswego Indians are said to be the first known people who made a tea substitute from the dried leaves of Monarda didyma, nicknamed Oswego tea. This tea substitute became popular in the New York area in the 1700s.

A full grown plant can be around 150 cm tall. The stem of Monarda didyma is hard and square. The central stem, branches and leaves are covered with small fine hairs, which give them a rough texture. These paired aromatic leaves are around 15 cm in length and 5 cm in width. The upper surface of each leaf is generally dark green in color. The leaves are aromatic.

The clusters of flowers are crowned in the terminal head of the plant. The flowers are generally lavender and dark red in color and they bloom at the same time. The blooming time lasts around 2 months during summer. The flowers do not carry any scent.

The leaves that are located at the lower part of the plant have a tendency to fall in a very hot and dry weather.

How to grow Monarda didyma?

Spring is the best time to grow seeds. Monarda didyma can easily be grown in ordinary soil, unless it is too dry. Heavy moist and well drained soil is required. Sunlight is preferred, but make sure that the soil does not dry out. This plant does not need too much of water. For active growth, the temperature has to be around 12 – 20 degree centigrade and the recommended pH range is around 5 to 7. Seeds, which generally germinate in 20 – 30 days, should be sown 1 to 2 cm deep.

Sometimes, the plants that are grown from seeds do not flower in the first year. It is not easy to keep Monarda didyma plants in proper condition during summer. It is popular as an aggressive spreader.

Read and know of some of the main uses of this herbal plant. 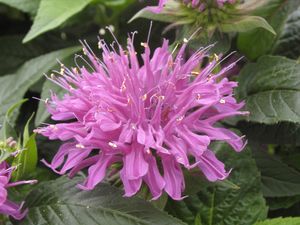 Monarda didyma is very well known for its medicinal usages. This herb is very popular as an alternative against the allopathic medicine. It has some reported benefits if used internally (at times in the form of an herbal tea, which is made from its dried leaves). The following is a list of things that this herbal tea can help you to cure –

This plant has got strong antiseptic properties. The infusion made from its leaves is very good for minor skin infections and wounds. It also helps cure urinary disorders and other conditions. An essential oil, made from this plant, is used externally.

It is also known that inhaling the steam from an infusion of the herb helps increase mucus flow and relieve sore throats.

Monarda didyma can be eaten cooked or raw. It is very popular as an edible garnish in salads or fruit salads. From the fresh and dried leaves of this flower, an aromatic tea is made. It is also used to add flavor in jelly, fruit cups and beverages.

Pour boiling water in a cup and add one tea-spoon of dried flower/leaves and keep it for 10 – 12 minutes. There are herbal tea recipes

Apart from the above mention usages, this plant is also used to make perfumes and the dried flowers and leaves are used to scent potpourri.

If consumed in large dose, it can stimulate menstruation. Pregnant women, who are suffering from menstrual disorders, must avoid consuming Monarda didyma.

Before using any part of this plant, everyone must make sure that they consult with a person who has got knowledge about this herb. Otherwise, things made from this herb can produce toxic effects at times.

Here are some interesting facts about Monarda didyma –

Though this plant is native to the Northeast US, it is also a well known herb throughout the world because of its medicinal and herbal usages.

Here are some images of  Monarda didyma. 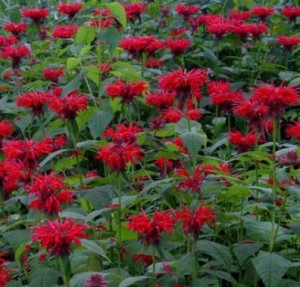 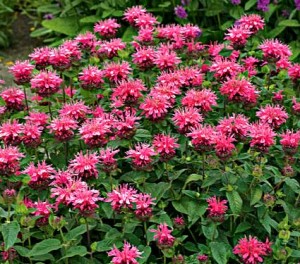