The Ilama is indeed a fine annonaceous fruit native to the tropical lowlands of Mexico and Florida. This fruit derives its name from the Spanish word ‘Nahuatl ilamatzapotl which means ‘old woman’s sapote’. 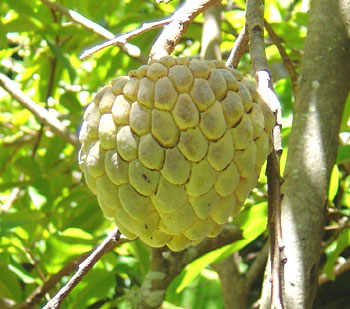 Many still tend to confuse ilama with the almost identical cherimoya fruit. However, people love the juicy ilama for its sweetness and distinct flavor that is unlike any other of its relatives.

The scientific name attributed to Ilama is Annona diversifolia.

Shape: Ilama is mostly cone shaped; however this fruit may also be ovular or heart-shaped.

Size: It is approximately 15 centimeters long.

Weight: One Ilama weighs around 900 grams.

Color: The color of the outer covering or the skin of this fruit varies from light green to a deep-pink or somewhat purplish color. The green ones have a flesh that is white in color, whereas the pink ones have a rose colored flesh.

Flavor: The green ones have a rather sweet flavor; the pink ilamas are more on the tangy side. 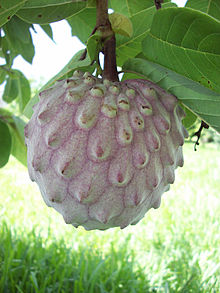 The tree that bears the ilama fruits is approximately 25 feet or 7.5 meters tall.

The tree bark is a pale brownish-grey in color. Apart from being furrowed, this bark is also aromatic having a strong and pleasant odor.

It has thin and glossy leaves are egg-shaped with the narrower end towards the base. The tree bears maroon flowers that generally open to the base.

It is important to remember that the ilama is a tropical plant. The distribution of this fruit ranges from the foothills of the southwest coast of Mexico to the Pacific coast of Guatemala and El Salvador.

Francisco Hernandez is the pioneer responsible for making the first known record of the ilama fruit. He was assigned the task to take note of the beneficial products of Mexico by King Philip II of Spain during 1570. People would still puzzle the ilama with the almost identical custard apple or cherimoya for many years that followed.

There is only one known variety of ilama. This particular variety known as ‘Imery’ is bigger than the usual ilama; its flesh is pink in color but it does not have a flavor as strong as that of regular or white-fleshed ilama.

Climate: Ilama is a typical tropical plant. A hot climate is essential for the ilama tree. A type of climate distinguished by long dry seasons followed by abundant rainfall is ideal for the growth of this plant.

This fruit plant grows by nature not higher than 2000 feet in Mexico; In El Salvador it is known to be cultivated up to 5000 feet and 5900 feet in Guatemala.

Water: The ilama tree requires plentiful rainfall after the long dry seasons. In areas that do not have periodical rainfall, the tree has to be irrigated using water supply via channels, ditches or streams.

Soil: This tree can adapt to any type of soil; however, a rich soil consisting of a mixture of sand and clay along with decaying organic materials is known to be ideal for this tree.

This plant is propagated by its seeds. It is important to note that the germination rate of these seeds is quite low. As such the seeds extracted from the ripe fruit remain dormant for a period of several weeks and even months sometimes.

The usage or rather application of gibberellic acid at 350 ppm is recommended to increase the rate of germination.

The seedlings begin to bear by a period of 3 to 5 years.

Tradition holds that the fruits are not to be hand-picked unless and until it shows marks of cracking. However the ilamas can be picked a little earlier and allowed to soften which normally takes 3 to 4 days. Please note that if this fruit is picked too early, there is every chance that it is never going to ripen.

In Mexico, the ilamas are harvested from late June. The harvesting season lasts from late July to September in Guatemala; while it is marked from July to December in Florida. 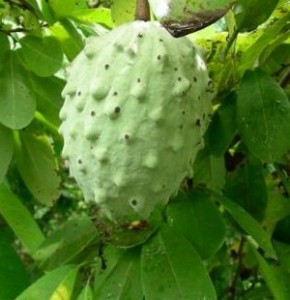 The chart below provides the nutritional value of the edible portion of the Ilama fruit as per 100 grams.

The ilama is consumed similarly like most fruits. Here are some of the ways in which you can enjoy the flavor of this fruit.

It is the inner flesh of ilama that is scooped out and eaten.

It also tastes great when served chilled or with mixed with a small quantity of cream and sugar.

You can also have this fruit with a dash of lime or lemon to intensify the flavor.

The ilama fruit contains protein and fiber necessary for our health. It is also packed with essential vitamins and minerals that increase the body’s immunity power and prevent us from acquiring diseases.

In Florida, the peak season of ilama is from July to December.

This fruit with its hard and protective outer covering is almost immune to any kind of attack from seed-boring insects.

The particular term ‘ilama’ is also applicable to another fruit called soncoya that is almost the same in size but grey in color.

There are no known side effects of ilama till date. However it is always recommended to consult your dietician before consuming this fruit.

Here are some pictures of the Ilama fruit. 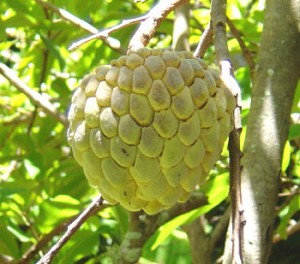 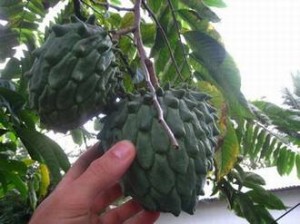