Hazel nut is an extremely nutritious nut. Apart from its edible uses, it is beneficial in cosmetic, aromatherapy and pharmaceutical purposes. 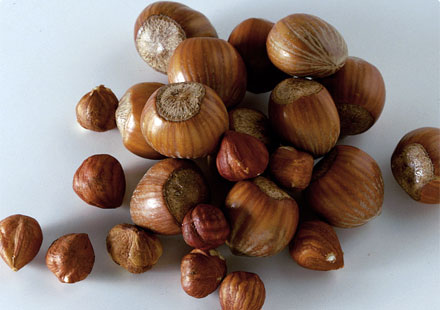 The scientific name for hazel nut is Corylus avellana.

Hazel nut is a single seeded fruit of the hazel tree. It has two species found in turkey and china. They are also named cob nut or filbert nut. The cob nut is oval and about 15 to 22mm long and a diameter of 10 to 15mm, the filbert however, is more elongated and round. The edible kernel is enclosed in a brown seat coat.

Hazelnut grows on bushes or small tree. The tree flowers in cylindrical catkins during autumn. They develop throughout winter and become mature to shed their pollen during spring. The female flowers appear during March or April. The tree sheds off its leaves for several weeks once the red stigma push through the buds.

Hazel nuts are usually found in abundance along the banks or in open places. They are found in the eastern part of United States and also along the Pacific coast. They are known as filberts in Europe. Hazel nuts are also found in eastern Asia across the Himalayas to China and Japan. They are grown commercially by Turkey, Italy, American States of Oregon and Washington. The largest commercial producer of hazel nut is Turkey. It is also cultivated in the Pangi valley of Chamba district in India. 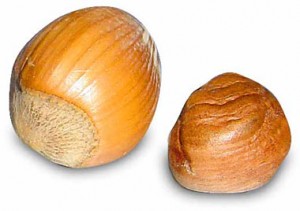 Historically, the hazel nut trees were grown in thickets. They were cultivated by the Romans and the English. Hazel nuts had been grown since the 16th century.

The ancient people used a method called ‘brutting’ for cultivating hazel nuts. The method involved snapping the new shoots at the end of the growing season. Traditionally the area used for the cultivation of hazel nut was termed as plat.

Hazel nut is usually cultivated for its edible nut. Several countries like Turkey, Europe and Ian produce this nut commercially. The hazel nut is very popular in the US market. In 1949, the Federal Hazelnut Marketing Order Section 982 introduced the Hazel Nut Marketing Board.

Hazel nut tree does not strive well in areas of hot and dry climate; however, it does require adequate sunshine for its fruit to grow to its full potential. The hazel nut tree is a woody shrub and is recommended to grow in twos so as to allow cross pollination.The tree has a cluster of shoots arising from a single area.

The hazel nut tree blooms in winter. The pollination is done by the wind as it carries the pollen from the catkins to the small female flowers. The flowers fertilize after spring and the nuts begin to develop. The nuts start to mature during the summer months and when they are fully mature they fall to the ground which is hand picked or harvested mechanically.

Hazel nuts become ready for harvest during late summer and early autumn. They are harvested annually. The tree when ready for harvest drops the nuts and they are either hand picked or mechanically harvested. Most commercial growers’ uses four primary equipments for harvesting, the sweeper, harvester, nut cart and forklift. The equipments sweep the nut from the ground, separate it from the dirt and process it. 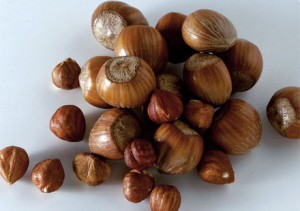 Hazel nut oil is packed with various nutrients and this amazing oil has several benefits:

There might be hypersensitivity to some individuals with using or eating food substances prepared with hazel nut hence it is advised to consult before applying or consuming it.

Here are some of the pictures of hazel nut. 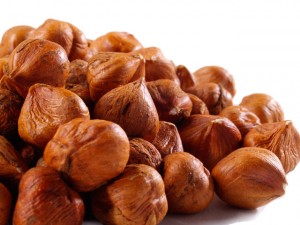 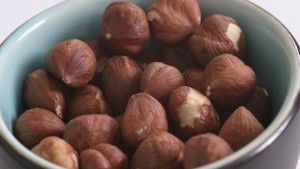