Have you seen the fruit, which resembles the custard apple in its look, and the taste is a combination of the banana, pineapple and the strawberry? Read to know about this amazing and delicious fruit to get more information about it. 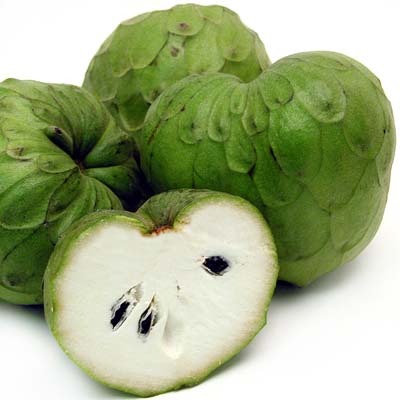 The cherimoya is a delicious tropical fruit, which is native to the Andean highlands in the South America, in the valleys of Peru, Bolivia, Ecuador, Chile and Columbia.  It is scientifically known as the Annona cherimola.

The cherimoya plant is a semi-evergreen shrub, which may also be deciduous in some places. It might grow as a small shrub or as a small tree extending up to 7 cm in length.

Cherimoya is an exotic fruit that is mostly grown in California. 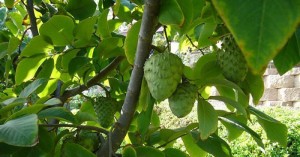 The cherimoya tree is a sub-tropical, small tree, which extends to a size of about 7 meters. The tree is a deciduous or semi-evergreen one. The tree is fast growing and is fairly dense. Its leaves are   simple, growing alternately, and is oblong in shape. They are about 2 to 8 inches in length and 4 inches wide. These leaves are dark green in color, and appear velvety green when seen from some angles.

The cherimoyas are fleshy, soft and sweet, oval shaped fruit, which is slightly oblique at the ends. It is a greenish yellow in color, however some of them may have been tinged brown.  Its skin is tuberculated. It is fleshy, and its flesh is white in color. Its texture is like that of a sherbet. The fruit is about 10 to 20 cm in length and 7 to 10 cm in diameter.

This fruit belongs to the same family as that of the custard apple.  It is often called theCherimoya Custard Apple. It is one of the best tasting fruits in the world. It is an exotic fruit, greatly liked by the people in the Californian region. 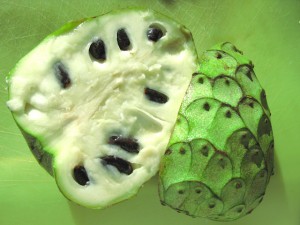 The cherimoya fruit has a large number of dark brown seeds planted in it. These seeds are non-edible.

The flowers of the cherimoya tree are yellow-brown in color, having a purple spot at the base. They are generally produced in clusters. Each flower has six petals each, is about 2 to 3 cm long. These flowers are hermaphroditic.

The cherimoya flowers are hermaphroditic. They cannot self-pollinate as they have a mechanism which does not allow this. These flowers are female in the initial stage, but they later on convert into males.  Therefore, they require a self pollinator who cans collect the pollens from the flower in the male stage, and deposit it back in its female stage.

There has to be a natural pollinator who can understand this mechanism so that the flower can continue its natural process and produce more fruits for us to enjoy!

Cherimoya is known by different names in different places. It has various colloquial names due to its limited distribution.

It is basically a summer fruit, and is harvested and grown mostly in the spring and the summer season. It requires sunny temperature to grow. They ripen in the months of October to May.

This fruit is available in many varieties. According to the degree of surface irregularity, cherimoyas can be classified as lisa, Impressa, Umbonada, Papilonado and tuberculada.

This is a fruit that is a hybrid of two fruits – the Cherimoya and the Sugar-apple (Annona squamosa). In fact it derives its name from the two fruits. Since it has some of the traits of the cherimoya; it resembles cherimoya in its taste, color, and certain growing conditions.

These trees are sub-tropical, mild temperate, which has the capacity tolerate light frosts. These trees need 50 to 100 hours of chilling at an average, else they become dormant and their foliation gets delayed.

For growing cherimoya, we need a sunny temperature during the day, but prefer cool temperatures at night. It grows best close to the equator, at high altitudes, for example in regions near the Andes and in California. The growth of this tree takes place in one long flush, usually beginning in April.

It requires mild temperature with, and is resilient to mild frosts. Young tips may be killed at around 29 degree Celsius.  It needs around 50 to 100 hours of chilling. But it cannot stand excessive heat or dry heat that prevails in the deserts.

The cherimoya plant needs plenty of moisture to grow. However, it should not be watered while it is dormant. Water should not be allowed to stand, as stagnant water causes salt build up.

Cherimoya is a very nutritious fruit – a rich source of carbohydrates, vitamin and minerals. It is a complete fruit containing almost all the essential nutrients in adequate proportions.

The proportion of various nutrients in a 100 gram of cherimoya is:

This fruit is rich in vitamin c, much more than many of the citrus fruits. It is basically a sweet fruit; the sugar content is quite high. Due to the high content of vitamin C, it works as a stress alleviator.

Cherimoya is high in calorie content. A raw fruit contains as much as 74 grams calories.

Cherimoya – How to Eat?

Cherimoyas can be eaten raw, or may be enjoyed after cooking. They taste excellent when they are mixed with other fruits to make smoothies. They can be taken in as fruit salads. It has a very delicious and sophisticated flavor, which makes it compatible to be eaten in any form you wish to.

You should not eat its skin and seeds, as they are non-edible. Do not eat it immediately after buying; it tastes best when it is refrigerated. If you are eating it raw, then simply cut it into half, and scoop out the flesh.

Cherimoyas can be eaten in any form, and they taste good in any way we eat them. Some of the popular and tasty cherimoya recipes are – Cherimoya fruit salad, Cherimoya Daiquiri, Cherimoya soufflé, cherimoya Ice-cream, Cherimoya Chiffon pie, cherimoya Pancakes, Cherimoya sherbets.

Cherimoya helps in curing many diseases such as Anemia, Arthritis, Decalcification, Hypertension, Stomach contractions, stomach cramps, intestinal transit problems, constipation, diabetes and other related problems. In Mexico, this fruit was used as a pulverizer, mixed with milk and powder as a potent emetic and cathartic. It can be used to kill lice when mixed with lice, and is even used to treat parasitic disorders. The decotation of the skin of this fruit can be used as a relive against pneumonia.

The dried flower is used as a flavoring agent for snuffs. The seeds are crushed to be used as an insecticide.

The cherimoya seeds and skin are non-edible, so you should not eat it, as it can lead to severe consequences. You can be paralyzed for 4 to 5 hours if you consume the cherimoya skin. The kernels are also toxic. The bark can also cause paralysis if it is injected.

Cherimoya is a rich nutritional fruit, with almost no side effects. Anybody, from a child to an old person can enjoy this fruit, without the chances of suffering any side effects. You can eat the fallen fruits as well as the harvested ones. Enjoy cherimoya without any tension.