Celeriac is a root vegetable that belongs to the carrot family. Its genus is Apium. It is also known as celery root and is related to the common celery. The plant is mainly grown for the knobby root which is eaten as a root vegetable. 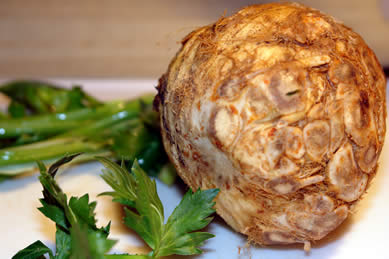 Scientific name for this vegetable is Apium graveolens var. rapaceum. 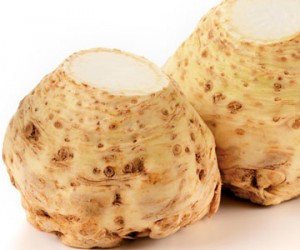 Read a detailed description of this nutritious root vegetable in here.

Weight:  Each of the root vegetables weigh approximately 1 to 2 pounds.

Size:  They measure around 3 to 4 inches in diameter.

Color:  The outer skin is pale white in color. The inner soft flesh is off-white colored like potato.

Smell:  It does not have any distinctive smell of its own. However, if smelled from up-close then a mildly bitter potato like essence can be recognized.

Taste:  The vegetable has a tinge of bitterness in it. Apart from that it is neutral in taste.

Leaves:  The leaves look like celery but are not eaten. They are long and have hollow petioles.

This root crop is extensively grown throughout Europe, Siberia, Southwest Asia, North America and North Africa. Nowadays this vegetable is exported throughout the world and thus available everywhere.

This root was recorded as an edible vegetable in the year 1623 for the first time. The vegetable was acknowledged in the 1600 BC after French botanists gave their recognition. It had been mentioned in the epic Odessey by Homer. Old documents prove that this vegetable was of immense medicinal and religious importance since ancient days in various civilizations around the world like Egypt, Greece and Italy.

Find out nutritional content in every 100gm of fresh celeriac.

This nutritious root vegetable has various health benefits. Regular consumption is surely to do extreme good to the body in the long run. 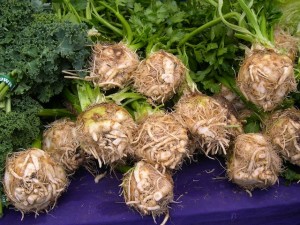 This root vegetable should be avoided during pregnancy. In case doctors specifically suggest having celeriac during this period, eat it in little quantity.

Though it is a very nutritious vegetable but still some people might face some allergic or inconvenient conditions after consuming this vegetable. 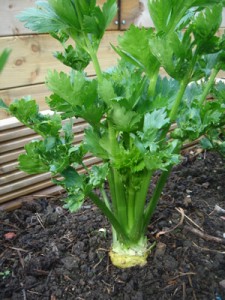 Celeriac requires full sun and moist soil to grow. The soil should have a pH balance between 5.5 and 6.5. They grow well in organic matter enriched soil. Standing water might harm the crop so make sure that not much water is logged on the field but the soil still remains moistened.

Given its immense nutritional value, celeriac is widely consumed as edible and medicinal vegetable. 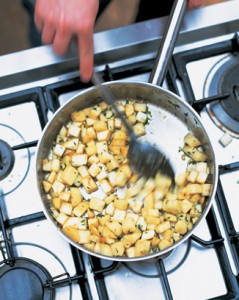 There are quite a few varieties of celeriac. Monarch, alabaster, prinz, bergers, kojak, snow white, white ball, anita dolvi, goliath diamant, giant prague, ofir and many more varieties of this root crop are available in the market.

The vegetable is available in any vegetable market and throughout the year. But the peak season of celeriac is from November till April.

Store the root in a fridge inside a plastic bag. This vegetable can be stored for a maximum period of one week.

It is eaten in various ways across the world in various forms. The vegetable needs to be washed thoroughly in running water to get rid of the mud and soil. Then cut it into big pieces and peel the outer thick layer of skin with a big knife.

Celeriac is sometimes used as a substitute of potatoes and vice versa.

See the pictures of this nutritious vegetable below. 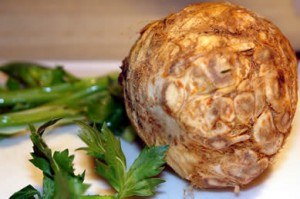 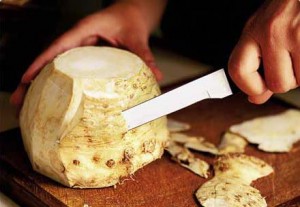