Bacon is a form of cured meat product prepared from pig meat. The meat strips are used as a main ingredient in numerous dishes in various cuisines throughout the world. It is known as “tocino” in Spanish while the French name for the meat is “lard”. The salty processed meat has many health benefits to offer as well. 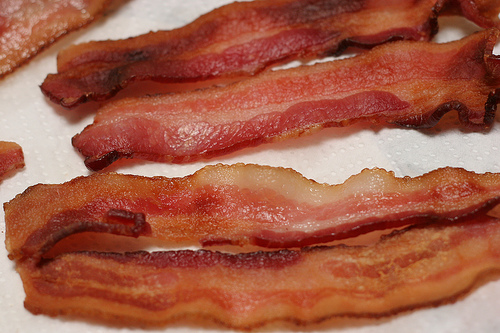 The slices of bacon can also be referred to as “rashers”. They vary according to the primal cut they are prepared from:

Streaky or Side Bacon: They come from the pork belly and have thick fat layers along the sides of the rind. This form is most commonly used in the US. Pancetta is Italian side bacon available both in the smoked and un-smoked (aqua) forms, with a strong flavor. This type of rashers is usually rolled into cylinders once cured. 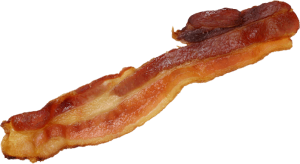 Middle Bacon: It is prepared from the sides of the animal with a moderate fat content and flavor. This product is less expensive than the streaky bacon.

Back Bacon or Canadian bacon (in the US): The rashers are prepared from the loins in the middle part of the animal’s back. This is a lean and meaty cut having much less fat than the other cuts. Their texture resembles that of ham. Most bacon used in the UK is Canadian bacon.

Cottage Bacon: These thin, oval shaped slices of pork meat are prepared from the shoulder region of the animal. The meat is first cured and then cut into round slice for frying or baking. This variety has a low fat content.

Jowl Bacon: This is the cured and then smoked cheeks of pigs.

Slab Bacon: This variety generally has moderate to high levels of fat. It is prepared from the side cuts, belly as well as the fatback. It should not be confused with another pork product named salt pork, which is made from the similar cuts; but unlike the slab bacon, it is not cured.

Bacon joints are also available in several varieties, including:

Collar Bacon: Like the name suggests, it is prepared from the animal’s back, near the head.

Hock: It is the ankle joint cut between the ham and foot.

Gammon: The Gammon is the hind leg cut, cured in the traditional Wiltshire manner.

Picnic: The picnic includes the shoulder cut beneath the blade. This variety is quite lean but tougher than many pork cuts.

Uncured and un-smoked pork belly is known as Chinese bacon and is used in numerous dishes in the Chinese cuisine.

The following chart gives the nutritional value of 1 strip of the cured meat:

Many health benefits can be derived from it when consumed in moderate amounts:

Good Source of Animal Protein: It is packed with protein essential for the body to function properly while maintaining the energy levels. Bacon helps to keep the body healthy, having very little amounts of fat building carbohydrates.

Regulates Blood Pressure: According to various studies, eating moderate amounts of bacon regularly helps to lower the blood sugar and blood pressure levels. It also helps to prevent and cure the symptoms of diabetes.

Increases Metabolism: It is erroneously believed to have a high fat contain that is harmful for the human health. But it truth, its high protein/low carbohydrate energy content helps to satiate one’s appetite and make them feel full, raising the metabolism and helping to lose weight. It also strengthens the muscles. Its total cholesterol, fat and saturated fat contents are higher than those of various popular cuts of chicken and beef.

Good for the Brain: The meat is rich in “choline” an essential nutrient for proper brain development. Studies show that choline is also useful for preventing and fighting chronic brain diseases like Alzheimer’s disease.

Rich in Essential Nutrients: It contains significant amounts of various vitamins and minerals essential for the body to function properly. The cured meat provides around 65% of the Recommended Daily Intake (RDI) of Thiamin, 47% of Niacin, 38% of Vitamin B12, 22% of Riboflavin, 24% of Vitamin B6, 22% of Phosphorus, 36% of Zinc, 10% of Magnesium, 10% of Pantothenic acid and 9% of Iron. Additionally, it has the highest protein to fat balance (4 to 1) provided by any fish, fowl or meat products.

Good for the Heart: Recent studies show that the Omega-3 Fatty Acids present in this meat actually make it beneficial for the heart. The choline found in it also helps to prevent various heart disorders such as strokes and heart attacks. It is even believed to help in recovering from such conditions.

Here are the main uses of the cured meat:

Recent studies suggest it to be useful for stopping nosebleed. According to a report, strips of cured pork have been successfully used as nasal tampons for curing nosebleeds in a 4-year old girl, in Michigan.

The popularity of this cured meat in the US has brought about numerous bacon flavored commercial products. Some of these products are quite unusual, such as bacon peanut brittle, coffee, mints, candy canes, salt, bacon mayonnaise (baconnaise), bacon vodka, bourbon and soda. Various inedible products are also available, including bacon flavored soaps, air fresheners, perfumes, band aids and even scarves.

Curing bacon at home is an easy procedure that allows one to add some variety to the daily breakfast. One can also avoid the nitrites and nitrates present in the commercially prepared product by curing it at home. Here is how to make nitrate-free bacon it at home:

How to Cook Bacon in the Oven?

Cooking bacon in the microwave is not difficult. It takes very little time while ensuring a delicious, evenly cooked strip of meat that can brighten up one’s day. Here are the instructions for making bacon in the oven:

Cooking it in the microwave is another way to make sure that the meat is cooked perfectly.

The rashers contain high amounts of fat or grease which melts into bacon drippings once the meat is heated. The flavorful grease is often saved, especially in the southern US and British cuisines, to be used in cooking and for flavoring various dishes like gravies, salad dressing and cornbreads. It is traditionally used for making crispy bacon on the stove top.

The names of some of the most popular dishes are mentioned below: 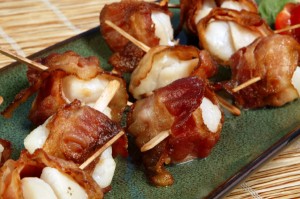 Turkey bacon can be used as a nutritious substitute for the pork product. Vegetarian alternatives are also available with eggplant bacon being one of the most popular varieties.

Is Bacon Bad for the Health?

It has been believed to be bad for the human health for a long time. However, recent studies have proved the inaccuracy of most of the claims about bacon increasing the risks of various diseases. Still, there are certain health risks associated with consuming too much of cured pork. According to a “British Journal of Cancer” report, eating bacon every day (even one daily serving) tends to increase the chances of developing pancreatic cancer.

It is available at many grocery stores that sell meat products. One can also buy the cured meat from gourmet food stores where both raw and pre-cooked bacon is available. Canned bacon can be availed at local meat stores or ordered online. The price can vary between $2 and $5 depending on the variety. 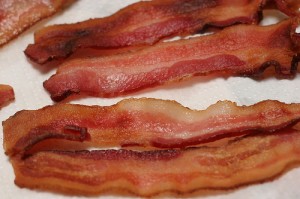 Find out some fascinating facts about this popular food:

Check out the following images to find out how the different types look. 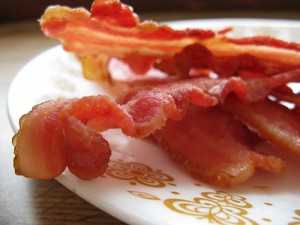