Araucaria bidwillii, also known as the Bunya pine is a majestic evergreen coniferous tree. They are easily distinguished due to its symmetrical dome shaped crown. This softwood tree has unusually deep green foliage. 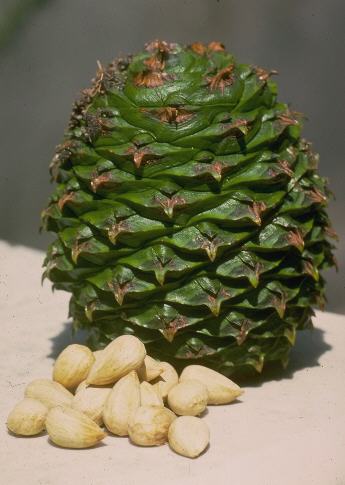 Often considered as Australia’s native tree, there are various local names like Bunya Pine, Bunya Bunya or False Monkey Puzzle. Araucaria Bidwillii is one amongst the 19 species of the Araucariaceae family.

Araucaria Bidwillii is a tall evergreen coniferous tree that can grow up to 120 ft tall. These softwood trees have horizontal branches which are evenly spaced and arranged in regular tiers till the apex of the tree. The trunk is usually straight and branch free for about 2/3rd of its height. The bark of the tree varies between dark brown to black. The thickness of the bark ranges from 5 to 10cm on mature trees. Bunya trees are characterized by its symmetrical dome shaped crown. The branches grow until they are long enough and eventually fall off as they get hit by a falling cone. Hence the tree retains a dome shaped profile. The branches below the dome do not reach the size of the crown branches. 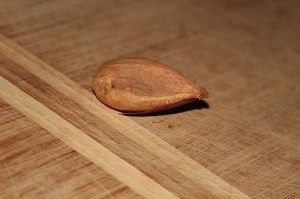 Araucaria Bidwillii trees have its origin during the Jurassic period. They were first discovered by Forest Ranger Lade in Northern Queensland. Very little information is known about its history however enough evidences justify that the aboriginals used the bunya nuts as a significant source of food.

Araucaria Bidwillii are native to the subtropical rainforest of southeast Queensland, Australia. It has been scattered between Gympie and the Bunya Mountain on the northeastern side of Dalby, Mt. Lewis and Cunnabullen falls north of Queensland. Other places where the Bunya trees are found include parts of Argentina, Chile, New Caledonia, Southern Brazil, New Guinea and Norfolk Island.

The Araucaria Bidwillii has several uses which can be categorized into the following:

The seeds of the banya pine are edible; they are eaten raw, roasted or grounded into a powder. These nuts are an important source of food and a delicacy for the Aborigines of Australia. Its taste has a texture of chestnut and a boiled potato.

Araucaria Bidwillii tree provides valuable timber for cabinets, wood makers and flooring. The soft wood of the banya pine are in great demand for making acoustic guitar soundboards. The branches are used by the locals for fencing and fuel.

The tall bunya trees act as a wind breaker and also provide shade and shelter. 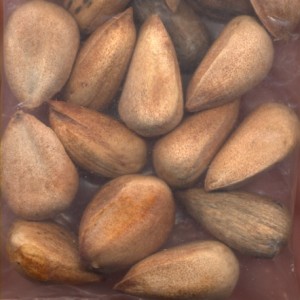 The distinctive trees are placed as a decorative plant for parks, landscape, avenues and can also be used as a house plant.

The medicinal properties of the tree are unknown. Professional consultation is always recommended before using the plant medically.

Araucaria Bidwillii cultivation is favorable in loamy soils which are well drained. It requires a cool temperature and are resistant to occasional low temperature of about -5 to -8 degree Celsius. It cannot withstand severe winters.

Germination takes time, almost 3 to 6 months. They are best sown during the month of February. Once the seeds are mature enough, the seedling should be planted in a different pot. Roots develop only after a year. The juvenile leaves are dark brown and soft, as they mature they become harder and sharper. The plant should be protected at least during its first winter.

It takes almost 15 to 20 years for Bunya pine to flower and yield fruits. The male flowers are found at the base whereas female flowers grow at the apex of the same branch. As the tree matures, the flowers move closer together. Cones start developing after two years of pollination. Seed quality depends on the availability of pollen. The tree generally flowers during September to October and starts yielding fruits in January to February.

Bunya nuts were considered a delicacy by the Aborigines of Australia. However, its inclusion in the Melbourne’s Slow Food Festival increased its popularity. These nuts are roasted, cooked, eaten raw and even grounded into a paste. Farmers have tried to grow the bunya nut commercially. Street stalls and grocery shops in the rural parts of southern Queensland sell the nut commercially as a regular food item.

The male cones are narrow cylindrical structure which is about 20 cm long. They appear during the autumn. The female cones are much bigger. They are ready for the harvest by summer or early autumn. They mature only once every three years.

Araucaria Bidwillii has been exploited by the timbre industries that have lead to reduction of its population. Deforestation for the construction of dams, roads and modern amenities is one of the major reasons for its massive depletion.

The bunya seeds do not have any dispersal agent in particular however there are some species of rats which devour on them. The cones are attacked by large birds, disintegrating the seeds.

Here are some Images of Araucaria Bidwillii : 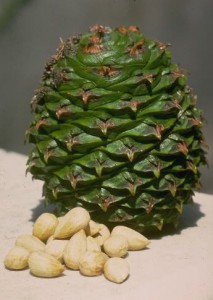 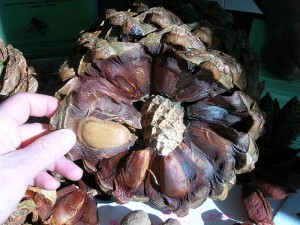